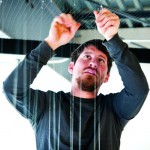 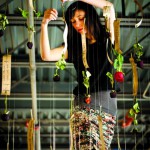 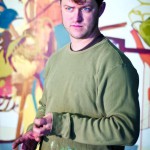 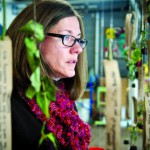 It’s been one month since Melissa Terrezza, Sean Pace and Jeremy Russell set up studio on the ground level of the Pioneer Building on Broadway. Paintings and mixed-media work by the three artists fill the walls; an installation of roses by Terrezza hangs from the ceiling and carefully plotted patches of mulch are arranged on the floor.

What’s next for the first smART space?

Xpress recently learned that the ground level of the Pioneer Building will be leased to Synchronicity Medical Wellness soon after the smART Space residency ends. The owners plan to maintain a portion of the art completed on the premises in order that “the patients feel nourished by that art and comfortable, as opposed to the sterile environment of most medical practices,” says owner Mickra Hamilton. “The thing that made us sure that we wanted that space was the energy we felt in it, which was the energy we felt from the artists.”

Terrezza is folding paper planes from a 925-page printout of the 2012 National Defense Authorization Act.

Pace waters the mulch for what he says will become an indoor miniature golf course, while Russell works on a highly detailed painting involving portraits and architecture in oil. The three engage in a friendly political debate and exchange ideas about potential art installations that may be attempted during the next 60 days. “I’ve never really approached art this way,” says Russell, “I’ve never let myself have this much time to think about it and make it.”

Last November, Terrezza, Pace and Russell became the first artists to be awarded a residency through the city of Asheville’s newly created smART Space program — the brainchild of Diane Ruggiero, Superintendent of Cultural Arts. For 90 days, the artists are allowed around-the-clock access to the 2,100-square-foot space on the ground level of the Pioneer Building, and are given a $1,500 honorarium. The public is invited to drop in on the artists while they work, and on March 2,  a closing reception will be held for the community to witness the fruits of their combined creative efforts.

It’s not a new idea. Artists have been utilizing vacant storefronts for art studios and installations from Portland to Pittsburgh, in what seems like a logical response to the economic downturn of the past five years. The artists benefit through the opportunity; the landlords benefit by having increased attention on their otherwise idle property. * (see side bar)

What is unique about smART Space is that Asheville just might be the only municipality in the U.S. to sponsor such a program and fund it directly with taxpayer dollars. Typically such programs are operated through nonprofits that receive their funding through grants and donations. “In doing our research, we couldn’t find other municipalities doing [residency] projects like this one,” says Ruggiero. “I’m not saying they’re not out there, but if they are, their marketing isn’t very good,” she laughs.
So Ruggiero sought help from the Lower Manhattan Cultural Commision, an NPO responsible for NYC’s successful Swing Space program because she found their structure could be easily duplicated within a municipality.

“My responsibility as superintendent is to spend the money [the city allocates to the Cultural Arts Program] in a way that brings that money back to the community. I’m going to be reaching out first to local artists,” says Ruggiero, citing a 2007 study by Americans for the Arts that shows a 7 to 1 return on government investment in the cultural arts (for every dollar given to a community, seven are generated). In this scenario, dollars might be generated directly with the purchase of art supplies from community art stores, or coffee from the neighboring coffee shop bought by visitors to the studio.

A total of $7,500 was allotted to the smART Space residency program, which Ruggiero plans to implement three more times this year. She breaks down the numbers: $800 will go to four temporary certificates of occupancy that are $200 each. A $1,500 honorarium will be given four times a year. The total bill equals $6,000. “Any extra money goes towards event permits and other unforeseen expenses,” explains Ruggiero. If the numbers are right, Asheville can expect over $52,000 to be generated locally via SMart Space.

Due to outside commissions and business obligations, Pace has decided to abandon the miniature golf course, and has used a portion of the mulch to form a large gun on the floor. There are still about 70 pages left of the NDAA document to fold into planes — Terrezza says she and Pace plan to string them from the ceiling in the formation of a larger paper plane. Russell arrives on the scene with his daughter who practices dance moves and cartwheels. She eventually settles down and starts a painting of her own alongside her dad. Several customers from the neighboring Dripolator coffee shop meander through the studio asking questions. Terrezza persuades them to write thoughts on slips of paper that will make their way into her rose installation. “We haven’t had any negative feedback,” says Terrezza. “Everyone who comes to the Dripolator is happy to see this space being used — it’s been sitting here empty for over two years.”

Since accepting her job with the city in 2008, Ruggiero has implemented two other major cultural arts programs with city dollars. In 2010, she developed the Art On Transit bus-wrap program, in which the work of four local artists was wrapped onto the sides of four city buses.

In March 2011, faced with a leaner operating budget, Ruggiero launched the Easel Rider Mobile Arts Lab in response to understaffed and under-used recreation centers that were costing city dollars. The idea for Easel Rider – a repurposed bread van packed with state of the art digital technology and art supplies — germinated out of frustration on Ruggiero’s part. “I thought, “Well, gosh, if I could just put all of my stuff in the trunk of a car, not only could I go to the rec centers, but I could go to the parks, the greenway and anywhere else I wanted to go,” says Ruggiero. “Now we are able to provide more programming with less resources.”

The smART Space program was initiated in early September 2011 when the city put a call out for artists to the 15 counties that make up WNC. They received 25 responses, and from these, a committee of seven individuals appointed by the Department of Recreation and Cultural arts chose Terrezza, Pace and Russell, who applied as a team. “We did not have a lot of visual artists come together as a collaborative project, and I think that was something that really intrigued the jury,” says Ruggiero.

Pace has been busy hanging paper planes for his installation which is nearly halfway complete. Terrezza is finishing up the second of two large politically oriented paintings. In a wave of inspiration, Russell has departed from his detailed narrative paintings and has begun a huge mural — more than 400 square feet — showcasing his more abstract painting style. With less than a month of the residency left to complete, Terrezza says, “It’s been feeling great in here. I’m going to be really sad to go.”

Three more incarnations of smART Space are planned over the coming year, and Ruggiero recommends that interested artists and performers keep an eye on the city’s website and Facebook Page for proposal details, or follow @AvlCultArt on Twitter (or write her directly at DRuggiero@ashevillenc.gov).

Artists are also welcome to submit proposals for the use of the Easel Rider.

“Folks aren’t used to looking to the city for artist opportunities, “ says Ruggiero. “But we are one of the few organizations that have the ability to pay artists. It’s supporting artists in a different way than just giving a grant.”

— Ursula Gullow writes about art for Mountain Xpress and her blog, artseenasheville.blogspot.com.

who: Sean Pace, Jeremy Russell and Melissa Terrezza
what: Closing reception for “Free Parking”
where: smART Space, downstairs in the Pioneer Building, 190 Broadway St.
when: Friday, March 2 (6 to 9 p.m. Show up through March 9)

One thought on “Asheville gets smART Space”