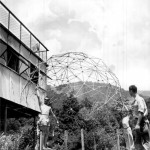 Home of the dome: One of Buckminster Fuller’s first geodesic domes was completed at the college in summer 1949. Photo by Masato Nakagawa/Courtesy Western Regional Archives 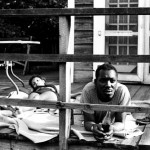 Open to all: The painter Jacob Lawrence joined the teaching staff in the summer of 1946, becoming one of the college’s first black instructors. He’s pictured here with his wife, Gwendolyn Knight Lawrence. Photo by Beaumont Newhall/Courtesy Western Regional Archives 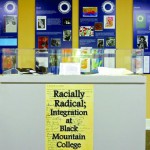 During summer sessions at Black Mountain College in the late 1940s, the futurist Buckminster Fuller struggled to create the geodesic dome. It would ultimately prove to be one of his most iconic inventions, but for months, a workable design eluded him, and the search for the right building materials was fraught with trial and error.

And then, just when the structure was approaching completion, there was a scrappy adolescent to deal with.

“I tried to destroy the geodesic dome, the first one,” John Corkran recalls in a new mini-documentary, Black Mountain College: A Child’s Recollection. His father, David Corkran, taught English and history at BMC from 1944-50.

“It looked like a play structure to me, and I was in the process of climbing up on it when Bucky spotted me,” John Corkran, who was 11 at the time, explains in the film. Fuller “said things which I can’t remember, except that they clearly indicated that I should get the heck out of there.”

The dome ultimately came to fruition, and has since been replicated on various scales around the world. But the tale of how young Corkran could have hobbled Fuller’s prototype is virtually unknown. That could change, now that Corkran’s memories are summoned and presented in the film. (Watch it at http://avl.mx/prpd.)

The 12-minute documentary lets Corkran do all the talking. He muses on growing up in the midst of an avant-garde haven that often seemed like a playground. A rich selection of archival photos fleshes out this rare view into a childhood at BMC.

Butler tasked his students with crafting a new story about some aspect of the college’s unique, if relatively short (1933-57), run. Given the extent of previous scholarship about the place, that might seem a tall order — until you consider that the largest collection of BMC materials in existence is now located in Asheville.

It’s the first-ever mountain-area branch of the state archives — and when it opened, a treasure trove of WNC-history materials that had languished in Raleigh made a homecoming.

Initially, 42 separate collections were moved from Raleigh to Asheville. They deal with topics ranging from early preservationist movements in the mountains to the creation of the Blue Ridge Parkway to Cherokee Indian history.

But the bulk of the materials — 32 of the collections — are focused on various facets of Black Mountain College, from boxes full of pictures to original artworks to academic and financial records.

Consequently, the Western Regional Archives is quickly becoming something of a mecca for BMC-history buffs, says Heather South, the head and sole archivist at the facility.

“There have been students, scholars and curious community members who have stopped by” to pick through the scores of boxes of BMC materials, she says, some coming from as far away as Paris. “People get really giddy about it, because there’s so much here to explore.”

And, South notes, there’s even more to come. For example, she recently negotiated the acquisition of a sizable set of records collected by the New York-based Black Mountain College Project, a long-running endeavor run by independent scholars. At present, South and her small army of college interns are sorting the collection and preparing it for public research.

It’s only fitting, South says, that such BMC resources be located near the site of the former college, and the proximity is proving to be a boon to researchers.

The first scholar to research at the new facility, for example, was David Silver, a professor at the University of San Francisco who plans to write a book about BMC’s on-campus farm. During his visit last year to research in the Western Regional Archives, he was able to make a quick trip up the road to the former college site, which today is home to Camp Rockmont, LEAF and an annual salute to BMC, the [Re]HAPPENING.

“I’ve been an academic now for about 15 years, and this was, without a doubt, the best research trip of my career,” he told Carolina Public Press in an interview after the excursion. “I’m a Black Mountain geek, and to go to this archive was like going to the promised land.”

Butler, the UNCA professor, suggests another analogy. Asheville, he notes, was already home to two significant projects aimed at documenting BMC’s legacy: the Black Mountain College Museum + Arts Center and a UNCA-based effort to digitize key portions of that center’s holdings. “Now that the western archive is here, I call it the Black Mountain College Research Triangle,” he says.

Boggs, one of Butler’s former students who co-produced the Corkran film, says that working with BMC’s primary sources was a highlight of his senior year.

“It was such a cool thing to be looking at the real thing, and it made me feel more like a student than I had for a long time,” he says.

An early but uneasy integration

Two other UNCA students, Lyndsey Henderson and Phillip Espisita, are interning at the Western Regional Archives, where they recently produced the facility’s first public exhibit. Racially Radical: Integration at Black Mountain College opened in February and will remain up until the end of March.

Using photos and documents from various BMC collections, the exhibit provides a warts-and-all telling of how the college came to accept its first black students and teachers. Though BMC is often heralded as a progressive outpost in the mid-century American South, integration hardly came easy, the materials show.

Granted, BMC was ahead of the curve, taking steps to integrate as early as 1944, a full decade before the U.S. Supreme Court’s landmark Brown v. Board of Education decision. But, as documents included in the exhibit attest, several senior faculty members argued that it was too soon, and too risky, to breach the color barrier.

“We should make it clear that we do not want to take Negroes as an affront to the South,” one argued at a faculty meeting, saying he feared how the local community around the college might react.

“Besides having students it really is necessary to have some relations with the [Southern] environment and not to exist as a foreign body. … In the long run it will put us in the situation of being militant reformers, and the selection of students will be affected.”

Other faculty members countered that the college should be a pioneer in integration, come what may. Their arguments won the day, assisted by another document that appears in the exhibit: a petition, signed by 38 BMC students, calling for integration “on a basis of complete equality.”

— Jon Elliston can be reached at jonelliston@gmail.com.