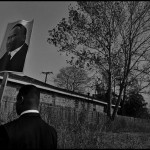 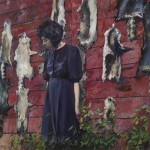 "Or Some of Those That Fly So High (Little Sparrow),” by Julyan Davis

Narration, a new group show on view at Blue Spiral 1, opens with a portrait of beauty marred by death and consequence. In “Or Some of Those That Fly So High (Little Sparrow),” a 45-by-50-inch countryside rendering by Julyan Davis, a woman in a navy dress stands in front of a rusted red barn. She’s either lamenting or contemplating, head down and knee-deep in jewelweed. But the painting is dotted with contradictions. Jewelweed, a natural remedy to poison ivy, grows in proximity to the noxious vine — so it’s likely within inches of the woman’s ankles. Meanwhile, the could-be beauty of the barn’s red surface is covered with a dozen opossum pelts.

The work sets the tone for a show steeped in regionalism, rural undercurrents and figments of Southern folklore. Roadside structures are dilapidated and in disrepair while figures with frazzled hair and sunken eyes sport gothic dresses and ragged shirts.

The works tend to isolate individuals, even going so far as to abandon them in a few cases. At the same time, pieces in the exhibit aggrandize barns, junky motels and hand-held signage while cementing a strong sense of place. To a far greater extent, the works use those very landscapes, figures and sidelined fragments to visualize the South’s penchant for storytelling.

Sculptures by Dustin Farnsworth embrace haunted isolation. He merges mannequin heads and half-foot-tall figures with architectural elements. One of those heads broods under the weight of an intricate, elliptical wooden structure in “A More Sophisticated Form of Chaos.” Its patterned, wood framing is reminiscent of antiquated amusement park construction.

In “The Bones Of,” Farnsworth has constructed an entire small-scale theater. It’s complete with a backstage, exposed beams and support cables — all of which the artist has torched. The stage front and floorboards are peppered with burned-out holes and charred wood. A solitary, mere-inches-tall man in a white shirt, red tie and black slacks is seated just to the right of center stage. Hundreds of red roses in black paint fan out in front of him.

Joseph DeCamillis’ work employs deconstructed books to keep storylines in the literal foreground. In several pieces, such as “Happy Place,” he partially scratched out titles to enhance literary themes. Whole chunks of the covers and spines have been removed and replaced with paintings on copper plates. That deconstruction is taken even further in “Bound to Happen (Autobiographical Straightjacket),” which features a hand-sewn, patchwork jacket made from the cloth bindings of dozens of dismantled books.

Waves of Southern-tinged Greek mythology live in the sculptural works of Christina Bothwell. Lavender-hued glass and pit-fired clay fuse together to form a resting half-person, half-horse beast in “Centaur.” Bothwell’s subjects, both human and humanoid, have the enchanting grotesqueness and deformity that could easily plague a string of Flannery O’Connor characters.

A series of photographs by Ralph Burns offers pastoral glimpses of contemporary yet mythic figures — preachers, protesters and stone statues. The images, set among modern-day marching scenes and street shots, reprise historic moments. Past and present are blurred in works like “MLK Day Parade #8” and “Asheville, NC #8.” The latter glances over several sign-wielding street evangelists preaching during Bele Chere, looking skyward to ignore the hoards of people circling below. Their signs, which read “Evolution is a lie,” capture the former festival’s liturgical turmoil.

Pastoral trends descend into sinful and quietly murderous themes in several of Julyan Davis’ ballad paintings. “When We Reach the Shell-filled Sea,” a vertically stacked diptych, depicts a woman thinly veiled by a nightgown. She’s resting on a motel bed while, in the frame below her, an empty pool is guarded by a fence threaded with dead vines.

Davis’ works further enhance the mythological and biblical elements already running rampant through the show. They offer these themes up as social realism, though, rather than fantasy or document.

The woman in the navy dress returns in “To Grow in the Sick Tree’s Path,” a sweeping, 15-foot-wide triptych on the gallery’s back wall. A landscape of a river raging far above flood stage is flanked by two portraits. On the left, the woman stands alone, peering over a bridge. On the right, we see only her back, as she faces a man emerging from the water. She’s either falling perilously in love or that much closer to her fate — most likely both.

Visit Narration, on view through May 24 at Blue Spiral 1. For more information, go to bluespiral1.com.