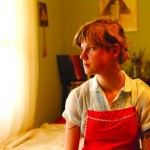 The movie tries to capture the awkwardness of siblings who drift apart. It’s filled with small, intimate moments. 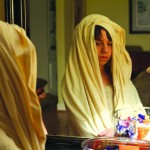 Astronomer Carl Sagan once opined that you have to understand the past in order to understand the present. That’s one of the central themes of Present, from local filmmaker Joe Chang. The film premieres at the Fine Arts Theatre on Wednesday, April 17.

The film stars musician Nesey Gallons as Daniel Crane, a performance artist grappling with past trauma. Inspired by a book of Americana, he decides to go with his sister Dorothy (Faith Callaway) and her roommate Cassie (Mariana Templin) on a road trip to his childhood home of Mt. Airy, N.C.. It’s a film that’s light on plot but filled with small, intimate moments between characters.

Chang is one of the founders of The Papercookie Picture Company, a small film production business. His feature directorial debut, Neutral, won the Top Grit Best Film award at the 2008 Indie Grits Festival. In 2010, he produced the SXSW award-winner Passenger Pigeons. He claims Present is a very personal, semi-autobiographical work — Dorothy is a loose conglomeration of his three sisters, and he spent a few years living in Mt. Airy as a child.

“As much as I don’t want to admit it, Nesey is basically playing me,” Chang says. “We filmed in the same house I lived in when I was 10 years old. I was trying to capture the awkwardness of siblings who drift apart, but because they went through these things together they still feel connected to each other.”

Gallons, perhaps best known for his collaborations with The Elephant 6 Recording Company, says he could relate to the protagonist and had gone through similar times in his life. “Daniel’s one of the many lower-middle-class, troubled, confused white boys who are trying to come to terms with what they want to be and why they’re so miserable,” Gallons says.“He’s starting to look through everything he’s lived and feels kind of guilty for not being a better human being.”

Gallons’ music was a major inspiration for the film. Chang claims he listened to the album Eyes & Eyes & Eyes Again constantly while writing the script. “I just fell in love with Nesey’s music, and I knew it was the perfect soundtrack for the film I was trying to create,” Chang says. “It was like music I had been searching for. I felt like I could understand it.”

The film was also partially born out of frustration with another project. After directing Neutral, Chang spent years trying to get a surreal science-fiction film off the ground, but it never ultimately materialized due to budget constraints. Chang estimates the final cost of Present was slightly over $6,000, nearly two-thirds of which was crowd-funded through Kickstarter in the spring of 2011. Filming occurred in the fall to take advantage of Halloween.

Half of the movie was shot in Asheville, and the rest was shot around Mt. Airy. The latter was the basis for Mayberry on The Andy Griffith Show, a detail that plays an important role in the story.

Before Present, none of the main cast members had any professional experience acting in a feature film. The project grew out of their friendships with Chang, and he gave them the flexibility to improvise. There were even moments when the group created impromptu musical numbers off the top of their heads.

“They were the three main characters before I even had a story,” Chang says.  “It was all based off of their personalities. I actually liked a lot of the stuff they said way better than anything I had written.”

It wasn’t always easy, though. The Silver Dollar Café, the site of a pivotal scene in the film, closed a month before the film was scheduled to shoot. The crew had to rush to film the scenes there before it was too late. And Templin, who works primarily as a visual artist, found it challenging at times to get used to acting. “There’s a lot of waiting, and then these intense moments of being incredibly vulnerable and open,” she says. “You have to be able to turn yourself ‘on’ really quickly and that was pretty difficult.”

In an appropriate turn for a film that embraces nostalgia as a means of moving forward, Chang is holding the first public screening of Present at the Fine Arts Theatre, where he worked as a projectionist for eight years. After that, he hopes to take the film on tour to several festivals and art house theaters around the country.