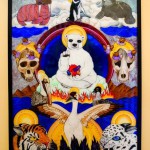 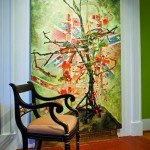 This is second of a two-part series about Asheville’s art market. The first article appeared March 26 and discussed Asheville artists taking their work elsewhere to find new exhibition outlets, audiences and collectors.

Art collectors don’t necessarily set out to become art collectors. That’s to say, most started at one piece, only to wind up with a small arsenal of artwork. That single piece may have been a friends or family member’s work, or maybe a complete stranger’s, whose art suddenly struck them in the gallery. One becomes seven, then 12 and then maybe dozens as gut-reaction turns into passion.

And while a painting or print may accent a room in the typical American home, such is rarely the case for art collectors. Instead, the furniture and wall colors, lights and windows accent the artwork. The works go beyond decoration. The house becomes a museum and collecting becomes a lifestyle — occasionally, an identity.

Collectors create a web within the arts community, one that affects every aspect of a local market. It travels from artist studios to gallery openings, local auctions and eventually, museums, where many private collections end up.

Asheville’s collecting population holds everything from Dali prints and folk paintings to Jugtown pottery and 18th-century theatrical etchings. And then there are those collectors who specifically look to local artists.

We’re fortunate to have so much art available; galleries are well-stocked, as are the restaurants, breweries and cafés. We’re not department-store furnishing. “In this age of commercially reproduced everything, the idea of something unique or handmade is particularly appealing,” Jordan Ahlers, Blue Spiral 1’s gallery director, tells Xpress.

Asheville has better artistic offerings, according to Asheville residents and art collectors Stuart and Sharon Craig. “It’s a treasure trove here,” Stuart says. “Whatever your scene is, it’s here.”

Their first piece was a wedding present he bought for Sharon. Since then, they’ve spent several years building a hearty Asheville collection.

“These artists put their heart and soul into these piece,” Stuart says, “and they sell it for peanuts.”

Buying the works involves a vastly different mindset than just favoring them on a gallery or studio wall. Collecting is about recognizing one’s personal taste, and building on it. It often becomes a response to the moment.

“Sometimes, it is an intellectual hook that grabs the collector’s eye,” says Blue Spiral owner John Cram, “and sometimes it’s how the artist handles the abstract.”

“I like it instantly,” Susan Turner tells Xpress. “I like to surround myself with the artworks I love — the colors, the movements.”

“I guess I’ve turned into a collector,” she says. It was never an identity, or a goal for the now-collector and owner of Street Fair, the eclectic downtown retail store. Rather, she has spent the past 40 years gathering pieces individually. “I’ve just wound up with a collection.”

It started with some Art Deco and Nouveau lamps she bought in the 1970s while living in Atlanta. Now it includes baskets, mirrors, furniture, pottery, paintings, prints and sculptures, among other mediums. The names and styles span continents. Despite having some heavy-hitting names from New York City, the Asheville and N.C. works reign superior. “I’ve never seen as many emerging artists in other places I’ve been,” she says. “They’re better here.”

Ray Griffin and Thom Robinson’s collection of N.C. artists has undergone several transformations since they moved here in 2003. What started with landscape paintings sourced from Hendersonville’s Oliver Gallery has evolved into a collection almost entirely of North Carolina artists, with a particular focus on Asheville. Though, they do make occasional, regional exceptions — provided the work is up to par with what Asheville has to offer.

“The source is much less important,” Griffin says, “it’s about the reaction.” It just so happens that these reactions stem from Asheville artists more than others.

Their collection is constantly shifting. Such as when the 2010 Gulf Coast oil spill prompted them to commission three works responding to the disaster. Commissions add new, personal elements to the collections body.

Pieces quite literally come and go. They’re often exiting to museums, such as the Florence Museum of Art in South Carolina, which has received “outsider” artworks from their collection. “It’s our intention, over time, to donate our collection to a museum,” Griffin said. Capital “A” that is, not multiple institutions. But they don’t have one in mind just yet.

Museums often give works and their donors a final artistic legacy. Think about that the next time you see the tags at a major museum. But not everyone goes that route. “My daughter will inherit the work,” says Craig, “whether or not she likes it. I guess we’ll see if she does.”

Let it also be said, loudly, that collecting isn’t limited to arts aficionados and the rich. There’s plenty of artwork within reach — within our various abilities, as Ahlers puts it. “I think that it’s important for people to support the work of artists,” he says, “because of what artists offer to a community and society as a whole.”