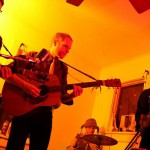 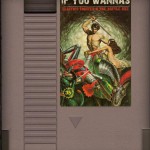 It’s hard not to talk about Electric Toaster & The Battle Axe, the upcoming third release by Asheville’s If You Wannas, without mentioning the work and homemade gear that went into it.

“I worked at Moog Music here in town for a few years,” lead vocalist and guitarist Ryan Cox tells Xpress. “I wound up with a really great catchall of spare parts left over for building stuff. I managed to stitch the junk I had together.”

It’s not something that jumps out on the album — in fact, you’d probably never guess that some of the vocals were recorded with a microphone built over the summer by Cox, or that the guitar distortion and tremolo were the result of DIY kits and trade magazine tutorials. Cox is quiet, reserved — there’s something mystical about him. You can picture him as the wizard of the group.

While he worked with Moog Music, he was literally the guy that Rick Wakeman (or his son) would call up when his Minimoog started making the wrong type of weird sound. He’s modest about what electronics he knows, but you get the sense that he’s being just that — modest.

Now, you might say, if you can’t discern it listening to the album, what’s the point? Doesn’t the studio or the music store down the street have the same fuzz effect? For one thing, bassist Trevor Stoia explains, having your own gear, built the way you want, is liberating.

“It’s so great to record when you don’t have to worry about 50 bucks an hour in the studio,” Stoia says. “You get to really spend time messing with mic placement and crafting your timbres.”

If You Wannas seem to care a lot about its albums, almost more than its live shows. From the band’s perspective, seeing the album as a finished product is like filling the last page on a journal and being able to flip back through all those pages to see your hard work, your trials, your tribulations and their results. But it’s better — instead of hiding it in a shoebox, you get to share your journey with as many people as you can. And people can enjoy it by simply picking up the cover and saying, “oh, that’s neat,” or diving into its songs and really getting to know the band.

If that’s true, you’ll probably be a repeat customer for If You Wannas. Packaged with a hand-glued-and-folded sleeve, Electric Toaster takes on the look of an old Nintendo cartridge, complete with 8-bit renditions of the band members and some goofy, fantasy-cart art. There’s a bare-chested man with a bare-chested woman’s arms around his hips, riding an armor-plated dragon, warding off some sort of knight and demon monkey. It’s awesome.

If we’re thinking in terms of classic video game character archetypes, then where Cox is the wizard, guitarist Conner is the warrior. He levels up on songs like “You Tried to Crawl After the Ball You Dropped,” where his upper-octave arpeggios sound right at home in the retro realm Electric Toaster imagines. Bassist Stoia is the valkyrie – the armor for the group. He holds Electric Toaster together with his catchy bass riffs, and even pulls some magic of his own on songs like “Silver Disc,” with a bowed double bass.

With the waning success of the album (or at least the increasing difficulty bands face selling them), the live show often becomes more of a focal point than the music itself. It’s easy, if not mandated, to neglect the album when you know the real work will be humping it between gigs and trying to sell out venues with your high-energy routines. Jacob Baumann, the drummer and logical archer with his speed and tact, sees recording as the place where the magic happens.

“I love recording – it’s my favorite part of music,” Baumann says. “It’s so much fun. You know, live shows are great and all, but records that you listen to hundreds of times throughout your life — I’m not suggesting that’s that type of record — but like, that’s what you aspire to do. To make really good records. To make really interesting stuff. What’s cool about the process that we do is that some of the tunes, through the recording process, totally change. Drastically, almost. Just the vibe and the feel. Just from being able to have that time to marinate on stuff and experiment.”

That’s why making your own gear is important to Cox and the rest of the band: if your sound is preprogrammed, well, to some extent, so is your song. As for what If You Wannas actually sound like, they’ve described themselves as “pop music for cannibals” in the past, but warrior Conner concedes:

“In the end, I don’t know; I really don’t think we sound a lot like anything,” Conner says. “I don’t think it’s like mind-blowingly revolutionary music. I mean, we’re not reinventing the wheel. It’s just pop rock to me — I would take that if we had to categorize a song.”

After guffaws from the rest of the band subside, Cox is more incisive.

“I really hope that we sound like nothing but ourselves.”

— Joseph Chapman can be reached at jchapman@mountainx.com.

who: If You Wannas, with Kovacs and the Polar Bear
what: CD-release for Electric Toaster and the Battle Axe
where: Emerald Lounge
when: Friday, June 17