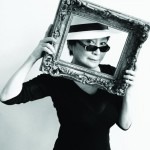 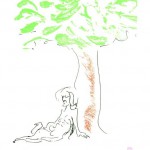 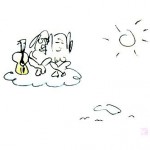 The exhibit for The Art of John Lennon, coming to Asheville this weekend, avows to continue the Lennon legacy of peace and love through his prints.

That’s a mighty task. How much could a traveling exhibit at Aloft Hotel help better the whole world? And could a single person viewing the art of a rock ‘n’ roll icon bring about much change?

Yoko Ono says simple acts can create “a larger peace,” and that’s an idea to take away from Lennon’s show: a colorful and blithe collection of lithographs, serigraphs and copper etchings Lennon produced in the last years of his life.

“The message is, do you your own thing,” Ono, 80, told Xpress in an interview punctuated with frequent laughter. If that seems, well, just too simple, it really isn’t, she says. “Just be yourself, whatever you are.”

Acts on a small scale radiate into the world and help create a larger peace.

“If you can do one thing a day that is to make somebody happy, even if it’s to say, ‘You look so good today,’ that is going to multiply,” she says. “And create millions of sweet beautiful words that all of us will utter, and that will make the whole planet float.”

Ono and Legacy Fine Art & Productions takes the art around the country — this year, they will create “pop-up galleries” in six cities, says the website. The idea behind using smaller venues is to create a decentralized situation, Ono says.

And to help make things happen is part of the show’s goal. The grace and happiness in Lennon’s art inspire in many ways, Ono says. “There’s a lot of sense of humor in there.”

As opposed to the institutionalized reverence imposed by museums, a sometimes more severe experience, Lennon’s drawings offer a feeling that the artist is smiling. “It’s so incredibly human,” she says of his work.

And while they are simple, she’s heard people view the work and say, “Oh, I could do this.”

“It’s a little deceptive,” she says with a laugh.

But, she hopes the show can inspire people to just be themselves, and invoke in people a feeling of simple action. “Maybe they will think, ‘Oh, I can do it, I can do my own thing,’ and by thinking that, to wake up your beautiful talent.”

Whatever that is, she says. Not to emulate Lennon, but to be your unique self.

“That’s something nobody else can do,” she says. “When you think about us, all of us have mouths, but the mouth formation is different in each person. Each one has a different mouth, can you imagine? So be very, very proud of your mouth and take care of it.”

And should we sing with it?

“Please, sing with it,” she says with a laugh. “That’s the best thing you can do.”

You don’t have to do something difficult. Take pride and take care, she says. What could be easier?

“The more incredible beautiful sensitive artists we have around, we’ll cover the earth with our talent and works and thinking and all that, it’s just going to create a very peaceful world someday,” she says, adding: “I hope.”