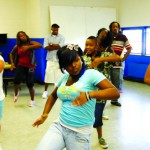 Michael Hayes and the Urban Arts Institute perform on the Arts2People electric stage on Sunday, September 4 at 11 a.m. 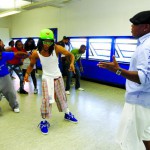 Expression is the heart of the Urban Art Institute, says Michael Hayes, the executive director, and hip-hip is in the heart of many of its members. “Hip-hop is the medium that brings all these young people together,” explains Hayes. “And hip-hop is about expression.” The Urban Arts Institute will bring its unique “hip-hop for peace” to this year’s Lexington Avenue Arts and Fun Festival.

Founded in 2007, UAI provides a safe environment for Asheville’s inner city youth. It currently serves 187 members ranging in age from 3-25. Members meet after school at the W.C. Reid Center, a community facility for the Livingston Heights neighborhood.

After a few hours of homework and study time, UAI members work together on various creative projects, typically until 8 p.m. The UAI explores a number of art forms, including dance, drama and music — but hip-hop is the true focus.

“We want to give people opportunities to express themselves artistically without barriers, borders or people telling them how to think,” Hayes says. “I’ve come to find out that if we listen to young people’s problems, we can address them.”

Judging by the success of the program, he’s absolutely right. UAI members often come from disparate, even opposed, backgrounds, but art brings them together. Hayes witnessed the unifying force of the creation of art firsthand at UAI’s first-ever Hip Hop for Peace (its signature talent show).

“The same people who used to shoot at each other dropped their flags and started working together, making beautiful music, joining dance groups and hanging out together.” He adds, “When they come together, gang stuff gets thrown out the window. It changes their whole outlook. It’s beautiful.” The effects of working as a group translate to academic success for the UAI members as well. “We use art and performance as one motivating factor for the kids to finish school.”

Because the kids at UAI play such an active role in the creation of their art, they tend to see marked improvements in reading comprehension and writing skills. Members of UAI must maintain a C average in school; many older members are on track to receive their GED or enroll at A-B Tech.

The most rewarding part of being involved in the UAI, according to Hayes, is that it allows the young people to feel like they are part of a community.

“I’ve seen young people from the poorest of the poor, wearing the same clothes three or four times a week, but when they perform, they put their shoulders back, hold their heads up, and they walk back proud of what they’ve accomplished.”

Hayes remembers a pivotal moment when the UAI, which is primarily made up of African-Americans, performed for a mostly white audience. “These people weren’t from the ‘hood,” he says. “And when you get other people seeing you, giving you standing ovations, screaming, and whistling, it makes you think, ‘We got something right here. I can do this. I can be loved, be respected for who I am.’ That applause changes them, makes them think, ‘I’m a part of this community.’”

When asked how UAI can help kids, Hayes didn’t hesitate to answer. First, he said, the regimented structure of rehearsals introduces discipline into the kids’ lives.

“I am not the easiest teacher,” he says. “There’s no leeway with me. They will not be disrespectful in the community, at school, at home, or to each other. Your walk has to match your talk.”

Second, he claims that the performances and the applause raise the kids’ self-esteem.

“There’s something empowering about young people working for 20 hours per week, getting on stage and showing the world how hard they’ve worked. It has an effect on them. They realize it’s bigger than them. It’s about how good a group can be. As a group, they can overcome all obstacles. It builds a bond that will never be broken. They think, ‘Wow, I’m a part of something special. They’re applauding for what I can do.’”

Michael Hayes and the Urban Arts Institute are doing important things for Asheville’s inner-city youth. He’s quick to deflect praise to the hard-working youths involved in the program.

Still, he recognizes the integral role he plays in the program and in transforming the lives of young people for the better.

“I was put on this earth to serve my community,” he says.

Based on the impact he’s having on Asheville’s youth, it’s hard to argue with that.

who: Michael Hayes and the Urban Arts Institute

One thought on “Hip-hop in the heart”