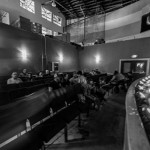 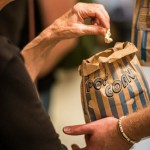 While you probably wouldn’t know it, 2013 has been a seminal and perhaps notorious year for movie exhibition. Major studios have been slowly moving away from the use of film stock, forcing movie theaters to either convert to expensive digital projectors or simply shut down.  In small towns across the country, numerous independent theaters are facing this problem. Cinemas that don’t make the profits of the major theater chains cannot survive with the added expense of digital conversion. This exact scenario played out recently in Waynesville. Haywood County’s last remaining first-run theater, Smoky Mountain Cinema, unable to afford expensive upgrades to its projection, locked its doors.

Haywood County, however, wasn’t left movieless for long. The very next day, a remnant of Waynesville’s past, the Strand Theatre, reopened after 20 years of abandonment and two years of remodeling. Renamed The Strand at 38 Main, it reinstates a nostalgic community landmark. Adapted to modern times, it’s a multiuse project. It’s divided into an exhibition area that acts as an 80-seat movie house (and Western North Carolina’s only proper repertory cinema), a concert venue and — oddly enough — an industrial space.

The theater’s resurgence is mostly due to that last part. Owners Rodney and Lorraine Conard’s family business is in the repair and refurbishing of handheld, portable bar code scanners for companies all around the world. The theater, which originally seated more than 400, was built in 1947 in the art nouveau style (the art deco Park Theatre sat right across the street). It ran movies till the early ’80s, when it was then handed over to the Haywood Arts Repertory Theatre.

A couple of fires underneath the balcony, one of which damaged the roof, shut the theater down in 1993. “Every person who grew up in Waynesville wanted to reopen the Strand Theatre,” says Lorraine, mentioning Rodney’s memories of seeing Mike Hodges’ Flash Gordon there as a kid. “It’s this nostalgic landmark. There were a couple of projects that tried to reopen it as a brew-and-view type of place, which would’ve been amazing, but some of the financial backing fell through. So, it just wasn’t possible for the scope of repairs needed for the building.”

Needing to expand their business’s operating space, the couple saw an opportunity in the long-shuttered Strand to combine both function and personal interest, all while giving back to their hometown community. “We had to spend money on space to expand no matter what,” says Lorraine. “We can spend it in an industrial park and have space, or we can spend it on Main Street, have space and bring back the theater — bring back evening entertainment as a listening venue.”

Making the family business the building’s main venture allows Rodney (the movie buff) and Lorraine (the musician) the opportunity to entertain their own interests, though neither sees this as self-indulgence. For the Conards, this is also a community venture. “Our business is bar code scanners, but this is our personal interests and passion,” Lorraine says. “We care about our community, and having things to do in our community, which brings traffic to downtown, which helps small businesses, which puts money into individuals’ hands to spend in our community. It’s a way of stabilizing the local economy, and it’s one small piece. If everyone decided to do their one small piece, then it would be pretty incredible.”

Even the closing of the Smoky Mountain Cinema, a theoretical competitor to the Strand, isn’t viewed as a triumph. “We’re a completely different niche. They were first-run, we’re miscellaneous — classics, cult classics. It’s not a win for us, it’s a loss for our community,” says Lorraine.

“We’ve had an interest in the local economy and building the local economy and supporting local business,” she adds. “We can set up a space to get it started, but it’s really about a community showing up. We invite anyone from the community who wants to come and help it grow. And that’s the main goal of the project, to make it so it’s sustainable.”

The Conards have even gone as far as to ask locals for input in the theater’s programming, holding meetings on the first Monday of every month where anyone can come by and suggest movies to run. This approach has created an eclectic selection, from classics such as Alfred Hitchcock’s The Birds to modern arthouse fare like Paul Thomas Anderson’s The Master.

Films are shown on Friday and Saturday nights (matinee screenings begin Thanksgiving weekend) for $6 a ticket. The theater serves organic popcorn and artisanal sodas, often handcrafted by the Waynesville Soda Jerks. On Thursdays, the Strand doubles as a versatile music venue (the chairs, for instance, can easily be rearranged into Cabaret-style seating), which — thanks to Lorraine’s history as a musician herself — was the original plan for the space. “It started off as a music venue,” says Rodney. “From that, we discovered that showing movies was a fairly easy setup.”

The Strand boasts state-of-the-art projection and 5.1 Dolby Surround Sound, specially designed by engineers for this particular space. Only being able to seat 80 moviegoers may sound small, but the Conards see it as a boon and a distinct feature of this resurrected theater. “Seeing Casablanca in here was such a neat experience, to come to a really small, intimate theater space and be connected with your community,” says Lorraine. “People were interacting with the movie, and that doesn’t happen in a big theater.”

what: The Strand at 38 Main
where: 38 N. Main St., Waynesville
38main.com
when: Movie screenings Fridays and Saturdays at 7 p.m.
$6 adults/$4 children
See website for music schedule, $12 all music tickets