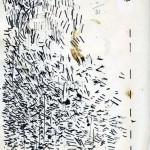 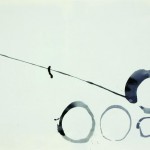 Lots of circles, a bunch of dots and lines running all over the place and a bit of jotted commentary can illuminate a composer’s aesthetic — but can you hold an entire art exhibition for a music composer?

That depends on whether or not the composer was also a visual artist. Black Mountain College Museum and Arts Center’s current exhibition takes on the task in John Cage: A Circle of Influences. Curated and organized by Alice Sebrell and Bridget Elmer, the show coincided with this year’s ReViewing 3, a topical conference that focused on Cage and BMC.

Known for his musical absurdities and minimalist compositions, some of Cage’s famed musical works included “prepared pianos,” “Suite for Toy Piano,” “27 Sounds Manufactured in a Kitchen” and the avant-garde bombshell that is “4’33”.”

Sebrell describes the avant-garde musician, Black Mountain College professor, printmaker, philosopher, educator, poet and mycologist as “far too complex to be solely labeled as a composer.” This exhibition contains bits and pieces from most of his undertakings. Photographs, prints, drawings, musical scores, notes, stones, feathers, brushes and edible paper, among other items, constitute a survey of Cage’s visual work, beginning with his time spent at Black Mountain College and extending through the early 1990s.

There are only relics from his BMC days in this show. The bulk of his work at the school dealt almost entirely with music composition and performance, famously culminating in the 1952 hybridized performance “Happening.”

Two photographs and a schedule for a 1948 performance of The Ruse of Medusa hang together. The one-act comedy included Cage on piano, the de Koonings, M.C. Richards, Buckminster Fuller and Merce Cunningham, his lifelong partner, as “Jonas the Costly Mechanical Monkey.” While the exhibition provides us a comprehensive survey of Cage’s visual work, a few included personal effects really bring out his quirky, postmodern nature.

A quick, hand-written note proclaims payment of $200 to one Clive Coen, for having flipped a coin for Cage. One could easily imagine it paper-clipped to a wad of cash, or maybe it was an I.O.U.

“Cleaning My Pen” is just that: hundreds of small dashes and marks strewn across the page, topped with a few coffee stains. In the top right corner there is a small math problem: 35-4. Why did he jot that down? Maybe to help break the negative space. Like much of the show, this piece adds to Cage’s developing aesthetic. One that has the slightest Japanese-watercolor appeal, making each one of these tick marks seem a tad more organized and deliberate.

Most of the show’s work is on loan. Cincinnati's Carl Solway Gallery, a collector of contemporary prints, lent several prints, including two “Plexigrams” titled “Not Wanting to Say Anything About Marcel.” This series was created in the months following Marcel Duchamp’s death in 1969. Each of the two pieces are composed of several plexiglass panels that Cage screen-printed with fragmented words and newspaper clips. The panels are vertically positioned about an inch apart in a wooden base, allowing the layers to build into a simulated three-dimensional image.

The other, larger portion of the show’s work was borrowed from Ray Kass, a collector, artist, personal friend of Cage and the brains behind the Mountain Lake Workshops that Cage attended periodically throughout the 1980s. Kass’ series of annual interdisciplinary workshops spanned from 1980 to 2001 in Mountain Lake, Va., and resembled the group-oriented educational environment of BMC in many ways.

Most of Cage’s Mountain Lake work used chance practices that he began using in his printmaking work in California during the 1970s. Rather than organizing his visual compositions and selecting his mediums and color according to traditional aesthetic principles, he made charts based on the I Ching. The ancient Chinese divination system became a guide for his decisions, making chance his most useful tool.  He began applying this system to music in 1951 and soon extended it to his visual art work.

Separate charts for each decision were made and filled with color choices, brush sizes and compositional positioning for specified shapes. Numbers were selected at random, first by hand, and eventually with a random number-generating computer program (once the technology became available). Each number had a corresponding color or shape that was used upon its selection.

There are several pieces that display chance, quite literally, but none so much as “Stone 15 – Brush 17 – Position H. 64, V.” (a fitting title, directly echoing the chance selection). Four murky blue-grey circles of varying widths crowd the bottom-right corner. A single line jets from the top circle, moving across and off the left margin of the paper. Written just below the far left extension are Cage’s brush size, rock and position selections with their corresponding numbers.

The Mountain Lake pieces were heavily influenced by his exposure to Japanese rock gardens. River stones were selected and placed on the paper in a fashion similar to what he saw on a trip to Tokyo. Using feathers and/or a variety of brushes, he painted around the rocks. The outcome resembles the linear designs of rock gardens. Some make more sense than others, at least on the compositional level. There is a similar look and feel to most of this series, making the pieces seem a little more cohesive. But for a few, the post-modernity is just too underwhelming.

In creating music, prints and drawings, Cage consistently ignored established aesthetics and techniques, for better and worse. This exhibition makes clear his immersion in chance selection in all facets of his work. Postmodern and the avant-garde artist, more than most art/music/literary/philosophical movements, have the innate power to confuse and overwhelm with concept, and Cage definitely has his moments. But this show conquers its original challenge and traces a visual development. It creates an aesthetic for “chance” and a composer’s work.

— Kyle Sherard writes about the visual arts for Mountain Xpress and can be reached at kyle.sherard@gmail.com