It’s hard to say if the Addams Family (the cartoon, the TV show, the movie) translates successfully to the musical format. The answer is is subjective and depends upon the viewer’s feelings about music theater and/or Addams-brand noir-schtick. There’s something jarring around the gloriously macabre Addamses cavorting and bursting into song. On the other hand, musical theater is campy and over-the-top, and what’s more over-the-top than a family of death-obsessed misanthropes?

What’s for certain is that Asheville Community Theatre‘s talented cast sings, dances, shambles, lurches, tangos, sneers, skulks, trills and thrills the hell out its production of The Addams Family.

The show (complete with an extended stage and live music) opens with a waking of the dead to the song, “When You’re an Addams.” The zombie ancestor chorus joins the family in impeccable choreography that includes the bunny hop, the twist and a line dance. It’s the first of many times that the musical recalls The Rocky Horror Picture Show — but trade transvestites for the undead and with a storyline appropriate for kids. (See audience guidelines here.). 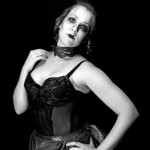 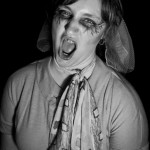 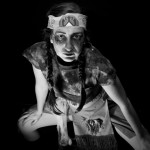 The musical parts ways from other Addams Family shows by placing formerly grim Wednesday Addams into a giddy romance with “normal” guy Lucas Beineke. The storyline centers around the meeting of the Addams and Beineke families — an obvious recipe for disaster/high jinks. As Wednesday points out, “We’re who we are, and they’re from Ohio.”

One of many surprises is that the pro-romance faction is led by Uncle Fester. Drew Emanuele, in that role, is a charming balance of kookiness, sweetness and vintage Fester. His character is probably the closest to that of the iconic TV show. But Addams purists should know that the unorthodox storyline lends itself to plenty of dark humor, and the new characters hold their own. Lucas, performed by David Fine, is an especially good signer and earnest foil to Wednesday’s (Mary Chamberlain Harlan) angst.

Even Lucas’s straight-laced parents (Mike Yow and Karen Covington) loosen up enough to reveal that there’s no such thing as normal and they might just fit in with the quirky Addamses after all.

The show is long — about 2 1/2 hours, with an intermission — but the action is non-stop. Any energy lost to the few slower numbers is quickly regained with the riotous antics of the ancestor chorus, Pugsly’s (Henry Casson) hilariously malicious affection for his sister, repeat appearances by a trio of trick-or-treaters, and some excellent choreography and dance solos. Mark Jones, as Lurch, wows with a few scene stealing moments. No spoilers, but trust that his character arc is a slow build for a good reason.

2 thoughts on “Theater review: “The Addams Family” at ACT”