Press release from the Friends of DuPont Forest:

“One day, many years from now, your children’s grandchildren will walk the trails of DuPont Forest. They will stop at the base of High Falls and gaze at the sheets of water cascading down. They will hike the sloping sides of Bridal Veil and watch dragonflies dart out over the warm rocks. They will likely never know that, years ago, because of your efforts and our voice, they won the right to stand there. But you and I will always know, and the legacy of DuPont Forest will live on forever.” — Governor Hunt in a letter to Mr. Woody Keen

Friends of the Falls argued fiercely that we were constitutionally bound to protect the waterfalls in DuPont. It wasn’t easy. Remember – this was before social media and the Internet was still pretty new. They began writing letters to newspapers, speaking out in news articles, getting the word out via email, tv, any which way they could. It was one of the first times email had been used in North Carolina to spur widespread support for an environmental issue. They held public meetings in Cedar Mountain, Brevard, Hendersonville, Asheville and Travellers Rest. Woody Keen, a local trail builder and mountain biker, produced a 30 second tv ad that ran in Brevard, Asheville, Hendersonville, Charlotte, Winston Salem and Raleigh.

Their hard work paid off. On October 23, 2000 former North Carolina Governor, Jim Hunt invoked the state’s power of eminent domain to save the DuPont Forest waterfalls.

We are forever grateful for the Friends of the Falls and their commitment to save the Forest for future generations. 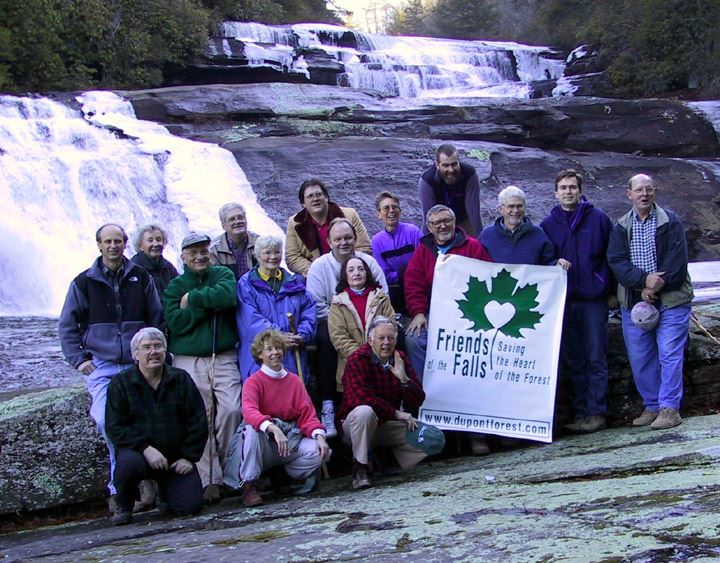