At noon on Wednesday, April 7, youth activists with Sunrise Movement organized dual “Good Jobs for All” rallies at Senator Burr’s Asheville office and Senator Tillis’ Raleigh office,  demanding they sign the Good Jobs pledge as part of a national day of action. The pledge calls for an investment in at least $10 trillion over the next decade to create 15 million good jobs, advocating for a $15 minimum wage and other labor and equity standards in the THRIVE Agenda, as well as union access through the PRO Act. Results from a new report were announced at the rallies, showing that enacting THRIVE would result in an average of 305,400 NC jobs each year. Organizers from Raise Up/Fight for $15, Indigeneous Environmental Network, and the NC Climate Justice Collective also joined. 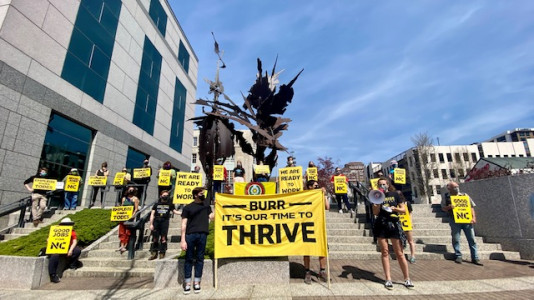 “I can tell you firsthand that we don’t just need a $15 minimum wage, we need a union, too. When low wage workers—especially Black and Brown workers—join forces in unions, it gives us political power and economic power. Our goal is for all these low wage jobs to become good union jobs, especially in the South,” said Eric Winston, Durham restaurant worker and member of NC Raise Up/Fight for $15 and a Union, speaking at the Raleigh rally. “Passing the PRO Act is key to removing barriers from building unions.”A new state-level report released today by the Political Economy Research Institute (PERI) showed that passing the THRIVE Act in full in 2021 would bring forth 305,400 jobs annually to North Carolina, reducing the average NC unemployment rate from 6.8% to 1.4%. Major investment areas include clean renewable energy and energy efficiency, infrastructure, agriculture and land restoration, and the care economy, public health, and postal service.” 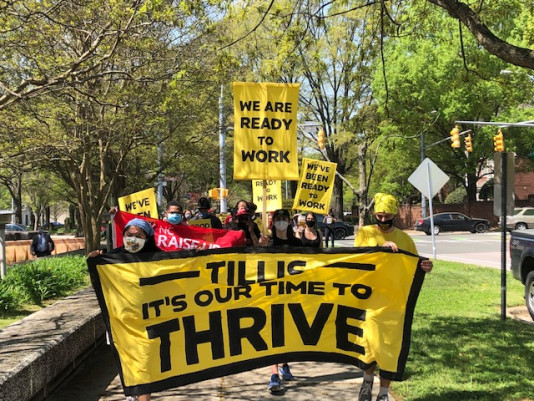 “From the Arctic to the Antarctic, it’s proven that we are stewards of the land,” said Mary Crowe, Cherokee tribe member and SE Regional Representative of Indigenous Environmental Network, speaking at the Asheville rally. “Our unique relationship to this land and the United States government aptly positions us to provide a decolonial roadmap, rooted in Indigenous knowledge, toward a truly regenerative future in which all of our communities can collectively thrive.”