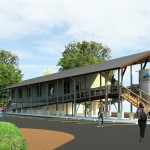 BREW AND VIEW: Catawba’s planned tasting room at 2 Fairview Road will allow guests to look down into the brewery while they enjoy a pint. Photo courtesy of Catawba Brewing Co. 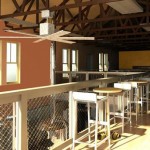 The first brewery opening of the year is anything but business as usual.

Highland Brewing Co. has come up with a way to pair nighttime, beer-drinking fun with a competitive cardio workout. In celebration of its 20th anniversary, the brewery is partnering with the Asheville Parks and Greenways Foundation and the city of Asheville to hold the Night Fight foot race event starting at 9 p.m. on Saturday, July 12.

Two different courses are planned,  both ending with a party at Highland Brewing on Old Charlotte Highway off Fairview Road. The Gaelic Gallop starts downtown on the corner of Ashton and Lexington, one block from the brewery’s original location — a distance of about 5.5 miles. Runners who want to get to their beer faster can choose the 3.3-mile Saint Terese’s Scamper, which starts in Biltmore Village. Headlamps and glow paraphernalia will be provided.

Early-bird registration is $35 for the long race and $25 for the short one. Proceeds from the event will benefit the Asheville Parks and Greenways Foundation.

Registration begins on Feb. 1 with the launch of the official race website: highlandbrewing.com/ashevillebeerrace

Sierra Nevada will be the biggest brewery to open in Western North Carolina this year. Twin Leaf will be the first brand-new brewery for Asheville, but its opening is still a few weeks away. So, with a grand opening planned for Feb. 12 (and possible soft-opening events even sooner), Catawba Brewing’s Asheville location will be the first new WNC brewery to kick off in 2014. Well, sort of.

“This was not our original plan,” says Billy Pyatt, one of the Catawba owners. “We ran into permit problems that will change what we’re doing at 2 Fairview Road. We’re not going to be able to remodel the existing building. … We’re going to have start from scratch.”

For Pyatt and the rest of the Catawba team, the conundrum means the pilot brewery and tasting room concept seen in the above photo won’t open until May at the earliest. So the team is doing what Catawba has always done: making the best of it.

Asheville Growler opened a few months ago as the first dedicated growler fill station in the state. Since then,it’s kept the tap lines flowing — and you can also grab pints and flights in the shop. On Sunday, Feb. 16, the business offers something new: “Beer 101” with a built-in tasting.

The class will run from 4-6 p.m., cost $10, and the instructor is Anne-Fitten Glenn (a former freelance writer for Mountain Xpress and currently marketing communicatrix for Oskar Blues). Naturally, you have to be 21 or older to attend.

While a growler station might not be your first thought when it comes to a classroom, Glenn says, “Asheville Growler offers a variety of craft beer styles on draft from local, regional and national craft breweries, making it a perfect spot to teach Beer 101.” In addition to a guided tasting, the class will cover some brewing basics, beer and food pairing, beer history, and more.

Keep your eyes open for future Beer 101 and other classes on the Asheville Growler Facebook page.

While work at 2 Fairview Road gets underway, the Catawba team will open a temporary tasting room in an unlikely place: 63 Brook St. That’s right, it’s the building sort of across the street from 2 Fairview Road — at the moment, home only to Old School Subs & Deli.

“What it comes down to is that Morganton is full, and we needed a space to start staging our Asheville brewery,” says Shelton Steele, the operations manager in charge of Catawba’s Asheville location. “This spot is a place where we can not only offload some of the stuff from Morganton, but also start to have a presence in Asheville and build a little bit of buzz. We can literally look out the window and share our progress with our customers.”

As you might expect, 63 Brook St. is coming together under some unique restrictions. Everything the Catawba folks buy or build will either have to be moved within months or abandoned when the time comes. “The good thing is we’re also renovating our Morganton brewery this summer,” says Pyatt. “That gave us some flexibility to buy some equipment we need here.” On the other hand, the temporary status will translate to an unusual serving arrangement. Since Catawba will not replumb the whole building, it will be serving 11 beers out of the trailers normally used for events.

Looking ahead to the real thing

This make-do approach will go out the window when the brewery/tasting room combo opens at 2 Fairview Road — which could be as early as May.

The upstairs will primarily be an indoor space where up to 70 taproom customers can hit the bar, but the design allows them to visit the brewery at the same time: A cutaway section of the floor will expose the brewery underneath. “We want it to be a place where you can drink great beer and watch what Kevin [Sondey] and his guys do,” says Pyatt.

Sondey is the new head brewer for Catawba’s Morganton and Asheville locations. With experience at large breweries like Stoudt’s and Highland, he’s a good fit for the company’s production side. And Sondey is clearly excited to get creative at the Asheville brewery. “I love traditional English ales and German lagers, so expect those out of the Asheville brewery. … But I’ve also brewed in the Pacific Northwest. You’ll see a new double IPA from Catawba when the temporary space opens.”

Catawba has yet to release hours, but Pyatt says something along the lines of 4-10 p.m. most days, with expanded hours on Friday and Saturday, is likely. Food trucks will be a part of both the temporary tasting room and the brewery.