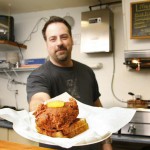 Wingin’ it: At the original Rocky’s location in Arden, Rocky Lindsley cooked and served all of the food himself. Photos by Jonathan Welch 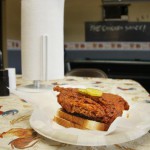 Hot damn! Careful. Rocky’s chicken is not playing around.

Rocky Lindsley's addiction is your addiction, Asheville. After taking an all-too-long hiatus, the fried-chicken meister is bringing back his popular Rocky's Hot Chicken Shack, and with it, the recipe for what is considered to be the most sought-after chicken in town.

While on tour as a professional drummer in '94, Lindsley became hooked on a certain sinus-searing brand of fried chicken from a Nashville hole-in-the-wall called Prince's. Once back home in Asheville, Lindsley tried to recreate the eye-watering fowl, to great success. Eventually, he opened Rocky’s Hot Chicken Shack in an aesthetically challenged building beside Highway 25 in Arden, serving the mercilessly hot bird to all who dared to venture in.

The Shack quickly achieved a solid underground following. Though Lindsley's brand of fried chicken was available plain, it was the ghost-chili-enhanced hotter-than-hot that made true believers out of the brave. The restaurant's sweating devotees seemed to issue a silent challenge to newbie diners: only grandmas order the plain chicken. But the spiciest bird, that was for toughmen who wanted to prove their mettle … and conceivably hallucinate from pain. The sheer deliciousness of the chicken, combined with both the bravado that it took to stomach that spice and the ensuing addiction — that's what earned Rocky's Chicken Shack a culinary cult following. But, as is is the case all too often, the popularity of any good thing can often bring it trouble. Following a string of articles revealing the hidden gem and an ensuing ground swell of success, the Shack abruptly closed. Talk about playing hard to get.

But to Lindsley, it was rather simple. He was tired, his wife was sick of it, and his landlord was thinking about charging him more. "I was working there five nights a week, playing music four nights a week and it was literally kind of killing me," says Lindsley. "My wife was also letting me know that it didn't matter how good it was doing, it ain't worth it if I'm a zombie." When the landlord upped the rent, Lindsley took it as a sign and flew the coop.

What he failed to grasp, evidently, was exactly how popular Rocky’s had become. "I was constantly running into people who were so upset, and it was very flattering," Lindsley says. "I was sort of surprised at the reaction." A few chicken-addicted potential investors even approached him about reopening the Shack. It’s easy to imagine them trembling from withdrawal and clutching fistfuls of cash.

Finally, Lindsley's 12-year-old daughter made him Google himself. Admittedly not much of a computer guy, Rocky was a bit shocked when he discovered just how deeply the public's devotion to his food ran, especially after finding scores of positive reviews and a Facebook page devoted to bringing his chicken back. "It blew me away. That was sort of a catalyst for me to partner up with these investors and get back into it."

After a number of trial runs, Lindsley says he’s ready to get back in the game of spicy chicken. "I made myself a test run and kicked my own ass in my own kitchen, so I've still got it," he says.

Lindsley reports that the Shack will reopen in mid-spring, though he won’t reveal the exact location. "It looks like it's a done deal, but there are some hoops we've got to jump through before it's settled, so I don't want to jinx anything by giving it away," he says. He divulges that West Asheville, his old 'hood, will be the site of the Rocky’s revival. "It's kind of cool to be back in my stomping grounds," he says.

Fortunately, very little of Lindsley’s successful formula will change, save the addition of a few side dishes. "We're going to keep the chicken exactly the same way — simple, to the point and hot enough to melt glass." Lindsley adds that plain (but still really good) fried chicken is available as before for those that don't really go for a full face-melter at lunch. "If [Rocky’s] was going to change, and [the investors] were going to try to take it to Vegas and make it something that it's not, I wouldn't be interested in doing it,” he says. “And because the investors got why it worked in the first place, they want to keep it soulful and they want to keep it honest and keep it simple," he says.

Rocky's, Lindsley assures Xpress, will stay rough around the edges, offering counter service and no wait staff. "Just come in, place your order, sit down. Pretty much the same joint. If you're going to have the word 'shack' in your title, you need to keep it that way." Rocky's Chicken Palace, after all, just doesn't have the same ring to it. "No," agrees Lindsley. "That doesn't exactly scream soul food to me."

To what does Lindsley attribute the near-cult following success of his chicken?

He tries many times to explain it and falters. "I'm almost glad I don't know how to answer that," he says. "It's almost part of the folklore of it in a way. I'm amazed at how well it did." He partially attributes his success to consistency — that is, the hot wings will be just as mouth-numbingly hot each time.

Then, Rocky takes one more stab at what makes his chicken so good, and nails it. "When somebody makes something the right way, it doesn't matter if it's fries or boiled peanuts or hot dogs, you can tell. When somebody really gives a shit about what they're doing and they really put their heart into it, you can really taste it."