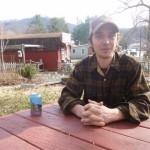 ROOTING DOWN: Grow-Down Kitchen owner John Braden, or “Johnny B,” named his venture in the spirit of embracing a slower, more creative way of life. Photo by Mary Pembleton 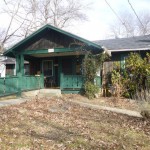 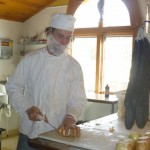 The Grow Down Kitchen is located in an unassuming building nestled on a side street in Black Mountain, directly across from the post office. As I navigate the street-side parallel parking, I am greeted by a gang of six or seven enthusiastic young men. Friendly introductions are made as we enter the commercial kitchen these entrepreneurs share: a light-flooded space reminiscent of a cozy and modern mountain cabin, with clean lines, a stone fireplace and a stereo system.

According to owner John Braden, known around town as “Johnny B.,” the name Grow Down refers to a moving backward, a slowing down, toward a localvore way of life where canning and creativity reign. And the Grow Down houses no shortage of rousing local flavor. Its N.C. Department of Agriculture-certified kitchen produces the likes of Green River Pickles, Fire on the Mountain hot sauce, So Fine Chocolates, Highland Gourmet’s decadent vinegars and Charley King’s jerk sauces.

When I ask Joshua Reeves of So Fine Chocolates what drew him to his craft, he replies, “My stomach.” Reeves’ French macaroons are the kind of good that make you want to jump up and scream, “That is amazing!” when the little tasties hit your tongue. Unexpected combinations of fresh and ambitious flavors like fig, ginger, balsamic and lime leaf scintillate. “I’ve been a sober alcoholic for 11 years of my life,” he says.  “I’ve learned to take pleasure in the simple things.”

Charles King of Charley King’s jerk sauces describes, in his island accent, his childhood in the Jamaican countryside. He grew up, he says, “very poor and was the youngest of eight kids.” A picky eater from a young age, he says he learned to bring home wild birds and pick peppers and spices from the garden to season the meat to his liking.

“People would come into the kitchen while I was cooking when I was very young, maybe 10 or 11, and be amazed that it smelled so good, and they would taste it and be blown away. They told me, ‘You will be a chef. A top chef,’” says King.

His jerk sauces gained local fame when he operated a food truck that was often parked at Pisgah Brewery. He now focuses solely on his line of sauces, which are available at local groceries throughout Asheville. He can be found in Grow Down’s kitchen once a week bottling sauces and developing a line of salad dressings.

Keenan Kulp, 23, of Fire on the Mountain hot sauces begins chopping hickory and cherry wood-smoked apples for his Sweet Fire blend. I pull on a wicked-stylish hair net at his request as he describes how his business evolved from a partnership with vendors at WNC Farmers Market, where he salvaged usable produce destined for the trash to put in his belly-warming recipe.

Kulp, who grew up canning and preserving on a Madison County farm, hopes to eventually create a large-scale nonprofit cannery to benefit local farmers and divert what would otherwise become food waste into a marketable product.

Braden explains that the Grow Down offers a more affordable option for food artisans who do not need the marketing and business development aspects provided by Blue Ridge Food Ventures. In a straightforward process, users reserve the kitchen on an as-needed basis, and the building is theirs for that time. Braden invites people who are passionate and serious about their craft, intending for the kitchen to be a launching pad for their success in the food industry.

As for his hopes for Grow Down’s future, Braden says he envisions lively community dinners with kids underfoot in the outdoor space behind the building, hosting food education classes, and a full kitchen schedule where he can see “good small businesses thrive.”