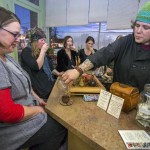 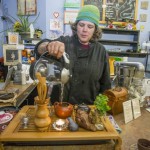 In a culture that has become increasingly focused on the “me,” tea enthusiast Sumitra D’Aragon hopes to bring the focus back to the “we.”

In November, D’Aragon opened the small Panther Moon Tea Bar in the back of the West Village Market in West Asheville. In a culture of bustling, fast-paced lifestyles, Panther Moon is meant to slow people down, sip by sip. “It’s a gathering place where people can come even if they don’t know each other,” she says in her soft, steady voice. “They can sip tea, get to know each other and relax. … It’s slow tea, not fast coffee.”

D’Aragon is fairly new to Asheville. She grew up in Seattle, where her family owned a wholesale produce company. She opened an Italian fine-dining restaurant in her 20s, then worked as a sommelier, a personal chef, a cheesemonger and later opened a shop in California that sold natural medicinal items, crystals and books and served as a community space. This track finally led her to traditional tea culture.

“I had to bring my spiritual path, my medicine path and my food path together in some way,” she says. “My mission is to promote peace, harmony and friendship through tea culture.” D’Aragon has been saving up for this tea shop for 10 years, importing different teas from China little by little over time. Two years ago, though she had never visited the area, she felt that Asheville was calling to her. She sold everything, loaded up her car and, bringing along her dog, drove cross-country, finally settling in the mountains of North Carolina with this little tea shop in mind.

Before opening Panther Moon, D’Aragon started out pouring tea at the Farmacy Juice and Tonic Bar in the back of the West Village Market once every few weeks. She practices the traditional gong fu (or “skill” in Cantonese) tea-pouring style, using small teapots and cups. After six months, D’Aragon and juice bar owners Carlysle and Judith Murphy decided to make tea a more regular feature in the space. “I just one day opened up,” D’Aragon says.

Panther Moon is subtle and peaceful, just like D’Aragon herself. It is a small space, nestled in the back of the natural foods grocery store and is only open three days a week, from Sunday to Tuesday, on the days when the juice bar is closed. D’Aragon likes the arrangement, she says. “I’m so happy to be part of that family there at the West Village Market.  Everyone’s so wonderful,” she says. “I love the idea of sharing a space within a space. It’s in alignment with the tea bar [because] what I want to promote is community.”

Tea is the world’s most widely consumed beverage next to water. Tea culture, which has thrived in the Far East for thousands of years, is just now beginning to take hold in the United States. D’Aragon hopes that tea will continue to grow and gain popularity in the West, and not just because it’s healthy. “[Tea] opens your heart to your environment,” she says. “It opens you up to the nature around you. It reminds me about my intention to live a simpler life, a kinder life, a slower life.”

And finally, tea promotes a sense of community. “The tea is more about ‘we,’” D’Aragon says. She hopes that Panther Moon Tea Bar will bring this sense of community to the West Village Market, to Asheville, and beyond. “The world needs more tea. I’ve been for a long time thinking we all need to do something that helps, and this is a way I can try and help, one tiny cup at a time.”