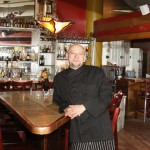 So long, Frog: Vijay Shastri says that, with the Frog closed, he’s going away for only a little while … but he’ll be back. Photos by Jonathan Welch 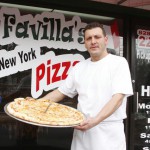 The Flying Frog, an Asheville institution open since 1996, had its last night of business on Sunday, Jan 16. Both the upstairs bar and the restaurant, located on the corner of Haywood Street and Battery Park Avenue, are shuttered for good.

"The decision to close came about based upon the fact that we're a higher-end, white-tablecloth restaurant," says Vijay Shastri, chef and part-owner, with his family, of the establishment. "It's a very difficult prospect in this economy, and that's what it boils down to. We looked at everything clearly before we made that decision."

Shastri says that he worked to lower prices and offer cheaper options at the Flying Frog, but changing the upscale image of such a mainstay proved difficult. "You get to a point where you're branded so heavily, that at a certain point everyone knows you and considers you to be very expensive," he says. "It's virtually impossible after all of these years to break that stigma."

Initially, there was some discussion of keeping the Frog Bar open, and closing just the downstairs restaurant. Shastri and his family, however, came to the decision that it was time to step out of the way of the other Asheville business owners trying to divide up a rather small pie in a rough winter. "This is a tough time," he says. "Since we're going away anyway, we wanted to get out of their way and let them do what they can."

Shastri says that Asheville's economic landscape has changed since his family became involved in restaurant ownership in the ‘80s (his parents, Jay and Cathie, had Café Bombay downtown then, and his family also owned the iconic Windmill European Grill). "High-end spending, from both tourists and locals, is virtually nonexistent in Asheville right now, even for the last couple of years," he says. "I can equate huge amounts of reduction here to the loss of frivolous spending."

Though Shastri appears to be in very good spirits, he says that the end of an era makes him sadly nostalgic. "I'm very sad about it. The Frog was my first grown-up venture. In the case of the Frog, there's so many good memories." However, says Shastri, he intends to stay positive. "I honestly choose not to think of this as the end of something but the start of something else much better. I would hate to end my long tenure in the Frog with something negative," he says.

Shastri says that he does not know what will replace the Flying Frog in the vacant space, which is part of the Haywood Park Complex, owned by the FIRC group. Staff of the Haywood Park Hotel said that they did not know of any plans, and to their knowledge, the hotel management has not solidified a replacement for the room service that the Frog once provided.

For his part, Shastri indicates that he's not retiring from the restaurant business for good — just for now. "By no means is this the end. Right now, this is the best decision to make in order for me to take the next step forward."

So there will be definitely be another phase, Xpress asks? "Asheville can't get rid of me that quickly," says Shastri. He's looking to spend more time with his family, including his young daughter. "Let's just say that this is not the last that everyone's going to be seeing of me," says Shastri. "And next time I'll be leaner and stronger."

Does that mean that he's going with a more casual theme? No, says Shastri. "I've done a lot of soul-searching, and the reality is that I am a white-tablecloth operator. More than likely, I will look to go to a smaller, more intimate white-tablecloth restaurant."

Shastri says that he intends to shutter the Frog on a positive note, with a thank you to Asheville for the many good years. "If it wasn't for the people in this town, I could have never gotten this far. This town is the reason that I've done so well. We had a great run. I would never change anything, honestly."

In other restaurant news, Steak & Wine has closed, taking with it Sadie's Seafood Pub and Steak & Wine's martini bar, Satchel's.

Sadie's was an offshoot of Steak & Wine that opened in 2009, offering a casual seafood pub environment. Many wondered whether it was a good idea to open half a block away from the Lobster Trap, a Hall of Famer in the “Best Seafood” category in Xpress’ annual poll.

“We really feel like we’re offering a completely different product,” S & W’s events director at the time, Leslie Rogers, said of the restaurant’s decision to open the eatery.

Steak & Wine, however, seemed poised to go the distance, offering the only steakhouse of its kind in downtown Asheville.

Steven Moberg purchased and renovated the S&W building in 2007, filed for bankruptcy on Friday, Jan. 14, according to court documents.

On a brighter note

Via e-mail, Elizabeth Sims of the Asheville Independant Restaurant Association acknowledged that the news of restaurants closing is sad. In order to help stimulate the restaurant economy, she says, AIR is "trying to bring a lot of value to the table (pun intended) to help folks feel good about eating out."

"We hope folks will visit our website and consider purchasing a passport and supporting our independent restaurant community, especially during this traditionally slower season," she says.

The passport includes deals from Tingles Cafe, Bouchon, the Laughing Seed, City Bakery and more. To get yours, visit airasheville.org.

Good news for people that live outside of the delivery range of non-chain pizza restaurants. Favilla's New York Pizza just opened at 1093 Patton Ave. in unit A, offering delivery within a 10-mile radius.

Andrew Favilla, who owns the New York-style pizzeria with his brother Vinny, is Brooklyn through and through. "I think I brought a taste of New York here with me," he says. "I can't get rid of the accent no matter how hard I try, so I might as well."

Does Favilla have plenty of experience making pizza, Xpress asks? "Oh my God, yeah," he says. He describes standing on a milk crate at eight years old, making pizza in his uncle's corner restaurant. "I was one of those pesky kids that would never leave," he laughs. "I was always there serving, making pizzas. It actually brought more business because it was really good pizza, and nobody could believe a little guy like me was making it, standing on a milk crate to reach the oven."

The restaurant offers delivery, take-out and catering only. And the single slices are the size of your head, perfect for folding and stuffing in your face on the go.