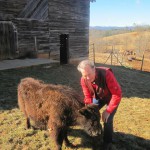 HOME ON THE RANGE: Dr. Frank King with a juvenile yak on his farm. Photo by Mark-Ellis Bennett 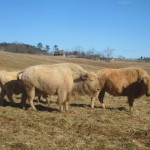 Imagine hiking along your favorite mountain trail and encountering a herd of bison. It could have happened 300 years ago when buffalo were indigenous to Western North Carolina. A sign on the Blue Ridge Parkway reads, “View Bull Creek Valley — The last buffalo seen in this locality was killed nearby in 1799 by Joseph Rice, an early settler.” Bison once roamed America from the Atlantic to the Pacific and from Maine to Florida.

Dr. Frank King, owner of Carolina Bison in West Asheville, explains that European buffalo crossed the Bering Straits into North America during the ice age. Those that remained in the Northwest Territories evolved into the wood buffalo (Bison bison athabascae), while others migrating south evolved into the plains bison. The two subspecies of the American bison gradually developed anatomic differences, adapting to their respective environments.

King recognized what the Native Americans knew from the beginning: the great nutritional value of buffalo meat. According to him, approximately 60 million buffalo roamed the North American plains when the first pioneers settled the frontier. Excessive hunting and later wholesale recreational slaughter drove the buffalo nearly to extinction, leaving the gene pool short and shallow. Since King founded Carolina Bison in 1985, King has acquired both wood and plains buffalo.

To make: Preheat oven to 275 F. Pour two tablespoons olive oil into roasting pan. On the range, using high heat, brown all sides of the roast. In a food processor combine water, vinegar and garlic, and process until garlic is finely chopped. Add salt, saffron, red and black pepper. Add remaining olive oil and cilantro leaves, and process until leaves are coarsely chopped, and mixture is an homogenous emulsion. Stir in lemon zest. Pour half of the sauce/marinade over the meat, cover and cook for three hours or until done. Pour the remainder of the sauce/marinade over meat before serving.

Options: Locally grown potatoes and carrots can be added to the pan along with the meat before cooking. Celery and onions can also be used, but should be added halfway through the cooking time.

More recently, Carolina Bison purchased a herd of 25 European wood bison, also called wisents. There are only about 50 in North America. King intends to cross the wood and plains buffalo cross-breeds with the wisents this summer to restore genetic diversity to the population on his farm. “In the spring of 2015 we’ll have the first cross-bred animals that will bring the bloodlines of all three subspecies together as one.” King also soon expects to acquire a herd of pure black buffalo from North Dakota.

“There was a herd of bison in the Crow Indian Reservation down in a ravine where the only way they got the bison out of there was in butchered portions,” says King.  “They finally got a logging helicopter with large nets, tranquilized some of the select young breeding stock and brought them out. That was one of the rare bison genetics we acquired many years ago. We’ve always been looking.”

Unlike beef cattle, buffalo require neither hormones nor antibiotics to raise, and because they are naturally leaner, their meat requires less cooking time. While beef bovine have longevity of 10-12 years, bison live 40-45 years. “We see that Native Americans that lived off the bison in rough plains conditions commonly lived to be over a hundred years of age,” King says. “How ironic: White man wipes out bison and then cardiovascular disease wipes out white man. Now bison come back sacrificially to help white man. Estimates according to whose history book you read would say the bison population in America was brought down to as few as 200 to at most 2,000 animals.”

Counting calves and animals being harvested for meat, Carolina Bison has anywhere form 300 to more than 600 head. King says that including his ranch and animals being cared for by partners, he has more bison than can be found anywhere else in the eastern United States. When last weighed his largest buffalo bull was 3,000 pounds. Since it is now too large to be weighed at the farm, King says he knows it has grown and he has reason to believe it may be the largest in the world. He also says he has what is, as far as he knows, the largest buffalo cow in the world, weighing in at more than 1,500 pounds. “A good strong, healthy, bison cow would normally weigh 1,000 to 1,100 pounds,” he said.

Carolina Bison also has a herd of 15 extremely rare white buffalo, not albinos. “The white buffalo has always been sacred, and when you’re with them you feel their presence. There’s a sense of peace and awe just being among them that words cannot express,” says King. “It must be experienced.”

King also has bactrian (two-humped) camels from Central Asia and dromedary (one-humped) camels native to the Middle East and the Horn of Africa. He is investigating the medicinal qualities of their milk. “There are global studies that show its consumption has helped people with autism, hepatitis and certain cancers,” he says.  “They are the most adaptive animals imaginable. It’s fascinating how they can thrive for long periods of time without water and with only very small amounts of food.”

“We started a nonprofit called the Wild Food Foundation a few years ago. It’s about studying how wild foods carry genetic properties that benefit anyone who consumes them. In our research we found the bison, being wild animals thought to have survived the ice age carry something genetically that is very pure and purposeful to support humans. People that get back to the roots of nature return to an environment where their genetic codes enjoy optimal health.”