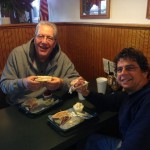 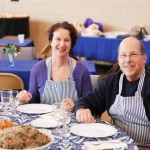 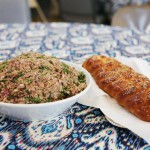 “If you didn’t know it was tongue, you’d think it was delicious,” Asheville resident Chuck Fink says of his favorite Jewish winter comfort food.

But does tongue really qualify as comfort food? “The thing about the Jews is, comfort food varies based on region,” explains Marty Gillen, chairman of the HardLox Jewish Food and Heritage Festival. “The Ashkenazi Jews immigrated from Eastern Europe, and the Sephardic Jews from Spain and the Mediterranean.”

Bruce Brown of Congregation Beth Israel, a self-taught chef who started out working with his grandmother’s recipes, agrees. “Different regions call different things comfort food. We come from all over.” Gillen, whose ancestors were largely Hungarian, says: “Jewish winter comfort food is typically something cooked in a pot overnight. My grandmother made the best stuffed cabbage with gravy and mashed potatoes.”

To make: Heat oven to 350 F. Cook noodles and drain. Mix in butter and cheeses and place in an 8-inch-by-10-inch buttered casserole dish. In a bowl, beat the eggs well, add sugar, vanilla and milk and beat for one minute. Pour over the noodles and bake for 50-60 minutes. Top with cinnamon and sugar, if desired.

To make: Heat oven to 500 F. Place unseasoned brisket in a covered roaster and bake for 45 minutes to sear in the juices. Remove from oven and pour off the fat. Decrease oven heat to 350 F. Add the cut-up vegetables and 3/4 cup water to roasting pan and season heavily with salt, pepper and paprika. Add a few bay leaves and cloves as desired. Cover and place back in a 350-degree oven for at least three hours, adding a cup of water after the first hour or as needed. Baste occasionally and cook until the meat tests tender. (Bruce Brown: “Sometimes, my brisket can cook 4 hours or more until it tests tender. Don’t be in a hurry.”) Let sit for 20 minutes before slicing, or cover and cool in the refrigerator overnight. It slices much better and evenly when cold. To serve, bring the brisket to room temperature and reheat. Serves six to eight people.

Options: According to Brown, you can strain the gravy though a food mill or put in a food processor and pulse a few times to make a nice sauce. To store the meat, cover it with a bit of gravy then freeze. Freeze the remaining gravy separately.

To make: Mix all ingredients in a blender or food processor until smooth. Using a deep-fry or candy thermometer, heat oil to 360-375 F on stovetop. Form latke mixture into compact patties using about three tablespoons of mixture per latke. Fry latkes in oil until brown and crisp on both sides — about two-three minutes per side. Susskind recommends starting with one “test latke” to get the oil temperature just right before proceeding with the others. Yields 12.

(Bruce Brown: My preference is to use whole milk and regular cheeses above. However, light versions can be substituted to reduce calories.)

To make: Preheat over to 350 F. If using the raisins or cranberries, place a cup of either in a bowl of very hot water for 15 minutes to plump them up. In a large bowl, mix all the ingredients together except the noodles. Fold in the noodles. Pour into a 9-inch-by-13-inch inch buttered casserole dish. Bake for 1½ hours. Serves 10-12. Kugel freezes well.

(Bruce Brown: This kugel is often called lokshen kugel and is most commonly served with the Sabbath dinner.  It is great as a side dish with meat or chicken in place of potato. Leftovers are fantastic when actually served in the chicken soup.)

To make: Preheat oven to 375 F. Cook noodles in salted water according to package directions. Drain and rinse well. Do not overcook. Return the noodles to the cooking pot.  Heat oil in a 9-inch-by-13-inch glass baking dish in the preheated oven for five minutes. Add hot oil, eggs, chicken soup, salt and pepper to the noodles. Mix well. Pour back into the baking dish. Bake for 1 hour until golden brown. Serves 10 to 12.
Kugel freezes well.

To make: Cut out and discard hard core of cabbage.  Put cabbage in a large pot. Pour boiling water over it; let stand until leaves are flexible and can easily be removed from the head.  Cut off some of the hard stem of each leaf, thinning it, so it will bend. Season the meat with salt and pepper; add egg, grated onion, apple,  sugar and rice.  Roll or fold approximately ½ cup of the meat mixture in each leaf.  Fasten with a toothpick.  Spoon a little sauce mixture on the bottom of a Dutch oven or large pot.  Place cabbage rolls folded sides down in the pot. Add the rest of the ingredients.  Cover and simmer on the stovetop for about an hour.  Add additional sugar and vinegar if needed to adjust seasoning.

To make: Cook noodles and drain. Mix in butter and cheeses and place in a buttered 8-inch-by-10-inch casserole. In a bowl, beat the eggs well, then add the sugar, vanilla and milk and beat for a minute. Pour over the noodles, then bake at 350 F for 50-60 minutes. Top with cinnamon and sugar if desired.

(The following recipe is from the Chabad House recipe book Tastes of Jewish Asheville.)

But for Fink, a retired business consultant and budding actor, and his pal Randy Robins, a retired teacher and standup comic, it’s definitely tongue. And according to Fink, Greenfield’s Bagels & Deli in Greenville, S.C., is the closest place to get it. “Randy and I used to drive 2-1/2 hours to Charlotte,” he recalls, “but one Monday we got there only to find the deli closed.” That’s when the duo decided it was time to find a closer source.

“There are no Jewish restaurants here in [Asheville] that serve Jewish food,” notes Gillen. “The kids of the people that owned them in the ’30s, ’40s and ’50s didn’t want to run a restaurant, so they faded out.”

According to Wikipedia, until the 1830s, the most populous Jewish community in North America was in Charleston, S.C. Eventually this community spread out to neighboring towns and cities. Jan Schochet, historian and native of Asheville, still remembers the original Schandler’s Deli, which opened in the 1920s between the First Baptist Church and David Millard Junior High School. Schochet and fellow historian Sharon Fahrer created the exhibit “The Family Store: A History of the Jewish Businesses of Downtown Asheville, 1890-1990” for UNC-Asheville. Schandler’s, which became the Pickle Barrel in 1966 and lasted into the 1980s, is the last Jewish restaurant locals remember, says Schochet.

But who needs a restaurant when Jewish comfort food is served up every Saturday after services at Congregation Beth Israel? On one recent Saturday, Chef Brown prepared sweet and sour vegetarian meatballs and a potato cheese soup. “Kosher meat is expensive, and besides, so many people are eating healthier now,” he says.

“Tongue isn’t very healthy,” says Fink. “It’s about 70 percent fat.” And when fellow tongue connoisseur and driving companion Steve Rubin passed away a year ago, Fink remembers thinking, “Who else would be stupid enough to drive 2-1/2 hours for tongue? I immediately thought of Randy.” In response, Robins deadpans, “When Chuck first suggested it, I was flattered. Then I thought, ‘Do I want to replace a dead guy?’”

Although Fink’s favorite combination is tongue with mustard and pickles, this time both men noshed on tongue sandwiches with Russian dressing, coleslaw and Swiss cheese — on Jewish rye bread, of course.

With no local restaurants to turn to, home cooks must fill the gap, relying on family recipes handed down for generations.

In 2010, The Chabad House of Asheville compiled a book of recipes titled Tastes of Jewish Asheville. Administrative Assistant Holly Ammon describes the book as a labor of love, “a way of coming together as Jewish women to share the love for cooking. All the recipes are kosher, and they're all written by women from Asheville.” According to Ammon it’s the only volume of its kind in Western North Carolina, containing pictures of the women and selections from the Torah as well as recipes. “There's a real warmth to the book,” she says.

The HardLox Festival is a great place to sample Jewish fare, but you’ll have to wait until October. In the meantime, Gillen recommends the Jewish Community Center’s dinner club, where everyone brings a dish based on a theme. Coincidentally, January’s theme was “favorite comfort foods,” and the dinner was held at the home of Amy and Paul Silverman. Suggested dishes included stews, mac and cheese, meatloaf and mashed potatoes, soups, banana pudding, gingerbread and bread pudding. Marti Biller and her husband, Julian, are regular attendees. This time they contributed a beef-based sweet and sour cabbage soup.

And even if you can’t make it to Saturday lunch at Congregation Beth Israel, you can still sample Brown’s food. He runs Sweet Peas Catering with business partner Lauren Mattysse, the chair of Beth Israel’s Kitchen Committee. Together they cater bar mitzvahs, private parties, weddings and just about any occasion. For even more recipes like the ones he’s shared here and online, check out the Cook’s Column in Ha Shofar, the synagogue’s monthly newsletter.

As for Fink and Robins, whether it’s January or June, they still make the drive to put some tongue on their tongues. “Greenfield’s is about an hour and 15 minutes each way,” Robins reports, adding, “That’s about the limit for how long we can put up with each other.”

The Family Store: A History of Jewish Businesses in Downtown Asheville, 1880-1990 is available in book form at the front desk of Pack Memorial Library, or at history-at-hand.com.

The Tastes of Jewish Asheville cookbook is available at chabadasheville.org or at Malaprop’s.

To learn more about the JCC’s dinner club, contact Community Life and Events Director Rochelle Reich at 253-0701 ext. 111 or rochelle@jcc-asheville.org.

The 2014 HardLox Festival is slated for Sunday, Oct. 19; for details, visit hardloxjewishfestival.org.

Greenfield’s Bagels & Deli can be reached at greenfieldsbagelsanddeli.com or 864-987-0064.

One thought on “Serving up comfort”