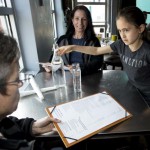 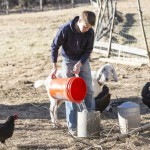 NOT JUST CHICKEN FEED: Joshua Kirstein, 13, operates his own chicken CSA, an idea he came up with on his own. Photo by Alicia Funderburk 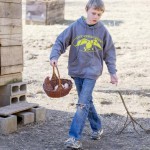 HOME WORK: Harrison Kirstein, 11, has his own business raising and selling turkeys on his family’s farm in Fairview. Photo by Alicia Funderburk

Each Sunday, Ella Triber readies herself for another shift of waiting tables at The Junction. Notepad in hand, she approaches her customers, takes orders and delivers piping hot plates of pretzel French toast and sweet potato hash.

Meanwhile, miles away at Adelbert Farm, Joshua Kirstein is tending to his chickens and calculating how many trades he will have to sell in his farm’s community supported agriculture program to break even with the cost of the chicks he ordered this spring. As Andy Harrill, at Imladris Farm, collects eggs from his chickens for a farmers market, a similar mathematical equation turns in his head.

Baker Petra Starr is likely at home, planning her next confectionary creation and dreaming of opening her own bake shop in downtown Asheville.

None of this would be particularly noteworthy — the region is full of foodies and entrepreneurs — except for the fact that Ella Triber is 8 years old. (And yes, she makes great tips.) Joshua and Andy are 13 and 12, respectively, and Petra has just entered double digits.

These kids may share an entrepreneurial spirit, but perhaps more importantly, their parents are in the food industry. And when your family runs a restaurant or a farm, their parents say it’s almost impossible, and not particularly desirable, to try to separate the family from the business.

Tanya and Charles Triber, owners of The Junction, a restaurant in the River Arts District, were surprised when their shy oldest daughter expressed interest in waiting tables. “Ella was absolutely the child who would hide behind my legs, especially out in public,” says Tanya. “But to see her now, interacting with strangers at tables and being able to talk to them and take their orders and be comfortable and confident — in a situation that causes some adults stress — it’s really cool, and it’s been a really good growing experience for her in terms of her confidence level.” The feedback from customers, the Tribers say, has been overwhelmingly positive.

And what does Ella have to say about her once-a-week serving gig? Well, helping out the family is certainly a draw, but the tips don’t hurt either. “I do like it because I get to make a little bit of extra money each week, and I like it because I have a job,” she says, adding, “I get to meet a lot of new people.”

Customers say that seeing Ella wait tables reminds them of their travels in Europe, where kids working in the family business is much more commonplace, says Charles. “For some reason, for the most part, it’s not as an American thing to do,” Charles adds. “I don’t know if it’s more about trying to protect children until they get older — you don’t want to expose them to society, etc., but she’s exposed to a lot here. … We don’t believe that it’s necessarily going to benefit our children to be sheltered.”

And while it’s true that Ella was always a shy kid, her parents say that in other ways it makes sense that she would want to get involved. “I do think there’s a sort of natural interest in food that she’s sort of inherited just by being in this family,” says Tanya, adding that Charles was a server for decades before opening The Junction. “It’s kind of in her blood.”

The foodie bug may have already bitten Ella’s 3-year-old sister, Shiloh. “[Ella] will talk with her friends about what hypothetical dream restaurants they’ll own, what kind of positions they’ll all have,” says Tanya. “Our little one’s comment at some point, probably about a year ago, was ‘I wanna be a kitchen guy.’”

Kimberly and Joe Kirstein, former public school teachers and owners of Adelbert Farm in Fairview, know how a love for food can easily infiltrate a family. The couple started Adelbert Farm to teach their three boys, Joshua, Harrison and Thomas, about living sustainably. The farm also offers camps and classes for kids in the community.

Joshua operates a chicken CSA, an idea he came up with on his own. “We used to be vegetarian, and so Mom always said that if we wanted to eat meat, it had to be local and organic and stuff,” he says. “And I was like, you know, I should just raise some. It worked out from the first year.” Meanwhile, the younger boys tend to the turkeys and ducks. Seven-year -old Thomas was excited to discover his first duck egg of the season, while 11-year-old Harrison reports his turkeys are doing “pretty good, but a bunch of them got eaten.”

Fowl aside, Kimberly says the boys are involved with everything that goes on at the farm. “I think they will all three tell you,” says Kimberly, “it’s really hard work sometimes, and sometimes it’s really not fun, and sometimes you really don’t want to do it. … Then we sit down to dinner, and it’s all this stuff either from our farm or from our friends at the market, and it’s so good. Not only is it good food, but you’re so invested in it.”

Andy, at Imladris Farm in Fairview, also knows what it’s like to be part of a family food operation. The business is a seventh-generation family farm owned by husband-and-wife team Walter and Wendy Harrill. The family grows and harvests berries for jams and jellies and raises meat rabbits. Andy takes care of his 30 free-range hens.

“He was the one that triggered it,” says Walter of his only child. “We came up with the idea as a family for it to be eggs, but at 6, he was the one that announced that he wanted to farm. … We had just finished reading Barbara Kingsolver’s Animal, Vegetable, Miracle, and she had done the same thing with her daughter, so that was kind of a nice model.”

Andy’s responsibilities include protecting the hens from predators — which Andy says is his biggest challenge — and managing egg sales at the North Asheville Tailgate Market. Andy says his favorite part of the year is picking season, when the family picks blueberries, raspberries and blackberries for Wendy’s jams. “My rule is put one in the bucket, eat two,” says Andy.

Plentiful and delicious food is a benefit kids of farm and restaurant owners enjoy that should probably be underscored. Rosetta Star, owner of Rosetta’s Kitchen, says her kids eat their fill at home and at the restaurant, which has undoubtedly had an effect on the way they relate to food and food culture. “My children eat everything; they’re very flexible and comfortable with spicy food, foreign food, sushi … [they] have very adult palates, which surprises some people, but I think that’s normal, and this pasta-and-nugget lifestyle is pretty bizarre,” she says.

Rosetta has four biological children, one child who lives with them, and “a lot of other kids that spend time a lot of time at our house.” All the kids are comfortable at the restaurant, which Rosetta compares to a “second living room.”

Ten-year-old Petra Starr is the first to follow in her mother’s culinary footsteps. She has applied to be on cooking shows, makes her own cakes and is eager to sell her wares at her own bake shop someday. “Me and my sister and my two friends want to do it,” says Petra. “And we started naming places where we might want to open it. … And then we were thinking about giant cakes that we might make — big, bright colors and stuff.”

For Rosetta and for all the parents who allow and encourage their kids to be a part of their business, including their children just makes more sense than leaving them out. “For [my kids], being with me at work is part of their life,” says Rosetta. “When I’ve traveled, [I’ve noticed] it’s very normal in lots of cultures to have your children at work and underfoot. …

One thought on “Very young professionals”