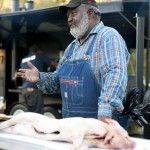 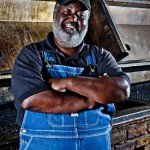 Go big or go home: “Unless they know how to get out there and cook a whole hog, they are not true pitmasters,” says Ed Mitchell. Photo courtesy of Electrocities.

To Ed "the Pitmaster" Mitchell, the barbecue debates are meaningless. While the rest of the country squabbles over the merits of flavor injections and whether mustard or vinegar-based sauce is best, Mitchell remains a purist.

"I've seen all kinds of little gimmicks," he says. "I'm not a stickler for injections, shooting some sort of flavor or juice or something in the meat to get a different flavor. I don't think that you have to do that to do barbecue."

Mitchell hails from Wilson, N.C., where barbecue means only one thing: the whole hog and nothing but, rendered crisp yet succulent through the magic of wood-smoke and fire.

For the 65-year-old Mitchell, to barbecue also means to celebrate.

“It's good times, very happy moments," he says. "An occasion to recognize something special that had happened or someone had received some good news — anything that brings about a very harmonious and very happy time. It's always been that for me. I've never been involved in a barbecue where it wasn't about some purpose, some excitement.”

Mitchell opened his first barbecue restaurant in 1990 in his parents' grocery store, partially by accident. Shortly after his father's death, Mitchell's mother craved the comfort of smoked pork to remind her of better of times, so Mitchell procured a small pig and a bundle of wood and got to work. The smell of smoke and cooking pig drew customers to the failing store. What started out as lunch became a lucrative business, and eventually Mitchell's Groceries phased out the groceries, becoming Mitchell's Ribs, Bar-B-Que and Chicken.

The restaurant quickly expanded, and since then, Mitchell has helped open The Pit, a renowned barbecue restaurant in Raleigh. He's since left that post, but not before being challenged to a rib-off on the Food Network's Throwdown with Bobby Flay (Mitchell won that battle). He's also become a favorite subject of food writers, particularly those interested in the recording and preservation of Southern culture. Mitchell, a go-to source for all things barbecue, is considered one of the best authorities on the subject in the world.

Mitchell recently returned from the Melbourne Food and Wine Festival in Australia, where he espoused the virtues of the real, tried-and-true barbecue methods. “I was invited to teach a class on how to prepare the fires and how you position the animal over the fire in order to get the kind of results that we always got in the earlier days of roasting and cooking barbecue,” he says. In a land of Aussie "barbies," where just about anything cooked over flames outdoors passes for barbecue, Mitchell found himself explaining just what that loaded word really meant from the standpoint of a man with true Southern American roots.

“All around the country, perhaps around the world, there's different perceptions about barbecue," he explains. "The clarity that I brought to the table was that, when you're barbecuing, you're actually slow-roasting an animal for at least five to six to seven to eight hours, depending on the size of the animal.” Everything else, he says, is just grilling. “For most of us down here, especially in North Carolina, either in the eastern or western part of the state — it really doesn't matter — when you say ‘barbecue,’ everybody gets excited because they know what that is,” Mitchell says laughing. “That's the difference.”

The way it was

When Mitchell was a boy, barbecuing was an all-night affair. "My dad and my granddad never would what they called 'take a toddy' in front of the womenfolk — they would always go outside. So, that was sort of a social event for them to get outside, cook barbecue, sit around, tell stories and drink moonshine. It was just a good time."

And while the men raked the cinders and shot the breeze, the women prepared other items in the kitchen, sometimes retiring to bed long before the animal was was done.

“It was such a way of life, a lifestyle, that no one actually realized that it was a particular art that was being exemplified,” Mitchell says. As much as it was a way of life, it was also a rite of passage.

“It gave the men a chance to bond with their sons and grandsons," he says. "But the fixing of the sides and all, there was a harmonious time going on between, you know, the grandmother, the mom and the daughter, fixing and handing down recipes related to the sides. The collards, pickled beets, baked beans, the old-fashioned stew, potato salad, corn — all kinds of sides and fixings that go along with it to make it come out a very beautiful dish when the two merge together."

Mitchell pit-roasted his first pig at 14. Here's how he tells the story:

"So, what happened on one occasion is we were [barbecuing] and the men had a little too much of the moonshine. And, of course, once you put the hog on, there's not very much to do but wait, because it's a long process. The only thing you have to worry about is making sure that the fire doesn't go out, or that the drippings, when they fall down on those hot cinders, the grease don't blaze up into a flame. They were sitting around talking, singing, playing guitar, just having a good time, but they sort of dozed off.

Of course, I was too young to get involved in the drinking part, but the beauty of what happened is that I was itching and anxious to get my hands on an opportunity to push the coals and cinders up under that pig. So, long story short, I actually finished cooking the animal. About 4 a.m. that morning, everybody started coming around, waking up a little bit, and everyone realized that no one was watching the pig.

And so, the next thing I knew, they passed the jar of moonshine. I was always saying 'Give me a drink, let me taste it!' And they would always say, 'No, this is bad water. No, you can't have this.' But I got a chance to drink out of the jug. It was the strongest thing I ever had. It took my breath! But, after my first swig, he took it away and said, ‘Now you a man. You cooked this hog.' It was the happiest moment of my life when that happened."

On April 6, Mitchell, with Elliott Moss, will fire up his smokers for ticket holders of a sold-out Blind Pig supper club event in Asheville.

Moss, best known locally as a chef at the Admiral in West Asheville, grew up smoking whole pigs with his father, a Florence, S.C. welder. "Barbecue's been a pretty big part of my life for as long as I can remember," he says. "I'm pretty excited about cooking with Ed, I can't lie. I'm pretty honored to have that opportunity, for sure."

Moss is intrigued by Mitchell's methods, he says. "He starts his ovens hot and just leaves it on closed and lets the fire die down," Moss says. "That's definitely something I can learn from. I guess that gets a nice sear going and starts getting that fat melting down a lot quicker."

Indeed, according to Mitchell, fat is crucial for proper-tasting barbecue. "You got to have the marble to get the flavor," he says.

"We've got Hickory Nut Gap hogs, so they'll be pretty fatty pigs, so that shouldn't be a problem," says Moss. "750 pounds of pig I guess we're going to be cooking."

Those pigs, Berkshire hogs, should suit Mitchell, a major proponent of heritage breeds. "Whether it’s a Duroc or Hampshire or Berkshire, any full-bred pig always gives you good results. I'm always trying to replicate the good flavor and taste that I came up with as a boy. And when you get a full-bred animal, raised in a natural setting, the aroma of the meat cooking sends you into a tizzy. You can always tell when it's not a full-bred animal, because he doesn't give off that aroma cooking."

Mitchell makes a point of supporting small farmers, and has done so for over a decade, winning the approval of Michael Pollan (The Omnivore’s Dilemma) and other supporters of sustainable animal farming. "Now people all over the world are doing it in small pockets, even Australia. They're raising the [heritage hogs] and finding a market, and the best market for that type of animal would be barbecue. In the commercialized way, they break the animal down and sell primal parts. But I want the whole thing, because I want to turn the whole thing into barbecue, from the rooter to the tooter!"

Though heritage pigs were the norm in Mitchell's father's and grandfather's time (when they were simply known as "pigs") that's no longer the case with the meteoric rise of factory farming.

"I tell you something else, young lady," Mitchell says, "it’s coming back though, because people are more conscious about what it is that they eat and they want to know where this stuff is sourced from. It's just got so crazy now. The gatekeepers, you know, the FDA, are supposedly looking out for us and all that kind of stuff, but, you know, you just can't rely on that. You've just got to put some things in perspective for your own self."