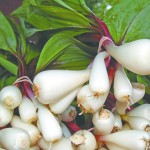 Tis the season: With the rise in popularity of Southern foods, ramps are having their moment in the sun. Photo courtesy of ASAP 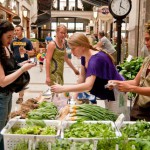 For the first time, ramps, the region’s most beloved early-spring green, are April’s featured food in ASAP’s Get Local initiative. Ramps and other local forest products are now becoming more and more available, but it hasn’t always been that way.

“Not long ago, you had to go to the more rural communities to find ramps,” says John Stehling, who owns Appalachian Grown partner restaurant Early Girl Eatery with his wife, Julie. “Now, most of the tailgate markets, co-ops and some grocery stores have them. And, in the past several years, they’ve begun showing up more and more in well-known restaurants.”

That’s because chefs are beginning to see ramps as true culinary treasures, something those in our area — especially those lucky enough to have them growing in their own backyard — have long known.

Method:
Sauté celery, peppers, and ramps with garlic until tender. Season vegetables and mix in remaining ingredients. Cook in a greased baking pan at 450 for 45 minutes or until done.

“Ramps taste like a very pungent, earthy mix of onion and garlic. That may not sound that exciting, but to chefs it is.” says John. “They can be used as a substitute for leeks, green onions, chives and even garlic. They can be cooked in a wide variety of ways, and you can cook with the entire plant.”

At Early Girl, John and his team use ramps in almost everything: quiches, soups, salads, as a garnish and in cornbread stuffing (recipe below). They sauté them, fry them, bake them — even pickle them.

That doesn’t stop John from having a favorite preparation, though. “I think they’re best paired with wild mushrooms and goat-feta cheese over a protein, or freshly picked and cooked over an open fire in a cast-iron skillet with a big chunk of bacon and a few potatoes.”

Expect to see and enjoy ramps’ versatility at “In Celebration of Ramps,” a dinner benefit for ASAP hosted by Early Girl in celebration of Get Local ramp month. Early Girl will prepare original recipes of two culinary titans: James Beard Award-winning chefs Andrea Reusing of the Lantern in Chapel Hill and Robert Stehling (John’s brother) of the Hominy Grill in Charleston, S.C.

While both chefs’ restaurants highlight the hardworking farmers and thriving local-food scenes of their respective towns, they have a deep reverence for the Asheville-area’s local-food movement — and of course, a deep love for our area’s ramps — a veggie not found in their neck of the woods (pun intended).

At the feast, to be held April 22 at 6:30 p.m., they’ll both be on hand to share these love stories and chat with diners. As for the recipes and evening’s menu, John will only give a few hints: local farm-raised sturgeon, aged country ham, foraged mushrooms and bamboo shoots. He does promise that the Hominy Grill’s world-famous chocolate pudding will definitely be served.

Tickets are $75, with proceeds supporting ASAP. They must be purchased in advance, as seating is limited, through ASAP’s website (http://www.asapconnections.org) or at Early Girl at 8 Wall St.

To find out more about the event, and read bios of the accomplished chefs, visit ASAP’s community website FromHere.org.

There are lots of ways to celebrate April’s featured food.

Purchase tickets now for Early Girl Eatery’s feast In Celebration of Ramps, April 22 at 6:30 p.m. Tickets can be purchased through ASAP’s website (http://www.asapconnections.org) or at Early Girl.

Of course, Early Girl isn’t the only local food-loving restaurant celebrating ramps. Just look for the Appalachian Grown partner and Get Local stickers on restaurant doors and windows. Many will be serving ramps over the next few weeks as farmers and distributors make deliveries.

Also look for local ramps at area groceries and tailgate markets. Outdoor farmers markets have begun for the season. Find the opening dates of your favorite with ASAP’s new online farmers market calendar at http://www.FromHere.org. And browse for markets as well as businesses selling ramps via ASAP’s online Local Food Guide (updated for 2012) at http://www.buyappalachian.org.

Don’t wait too long, though. Ramps have the shortest harvest season of any Get Local featured food: just two to three weeks!

For information about harvesting ramps sustainably and responsibly, visit http://smnpa.org.