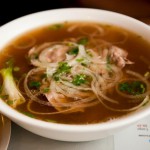 Soup’s on: Dark broth means extra flavor in the case of this bowl of Ph tái. Photos by Max Cooper 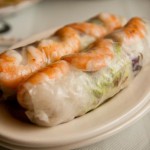 Pho 'R' Us in Arden has a good thing going, despite the enigma of its name. Is it a pun? And ode to ‘80s-era toy stores? The name reflects what the restaurant does almost exclusively (save for an egg roll or two) — and it does it quite well.

Pho 'R' Us has a tiny menu, a fairly spartan but comfortable interior and a delightful staff, and the pho is the real deal. Owner and chef Xe Nguyen is the brother of chef Tru Phan, who once helmed the kitchen at the short-lived Pho Fusion in the Downtown Market on French Broad Avenue. Chef Phan claims that the pho his brother makes may even be better than his own.

We prefer to stay out of any kind of sibling rivalry, but we can't help the way we feel about this pho and its deeply rich, satisfying and meaty broth. The beef version with eye of round is where it's at, with a heady flavor from long, slow simmering with stock components like charred onion and beef bones, giving it the right kind of funkiness.

Want much more than noodle soup and spring rolls? Tough luck, for now — but once you taste the pho, you'll be OK with the limitation. Vegetarian options, as well as chicken-based pho, are also available. Entree prices are $6.95 for a regular bowl of pho (still a good portion) and up to $8.45 for a large.