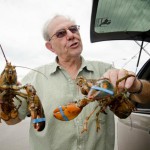 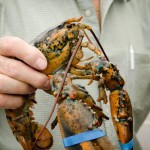 One Friday a month, Micheal Scharf waits in his car in the parking lot of Innsbruck Mall, ready to open his trunk for a select group of customers and show them the goods inside.

He's not selling anything illicit, nor is he pedlling rugs. He's the organizer of The Lobster Club, and he's undercutting the nearby Ingles by about $6 a pound.

Scharf, slightly hunched and wearing self-tinting glasses, brandishes two live lobsters as he speaks. “I guess you'd call me sort of an entrepreneur,” he says. “Multitasker, they call me.”

There’s no such thing as a local lobster, for a few reasons. The prominent lack of ocean in WNC is one of them. Also, lobsters become carnivorous in captivity, so they can’t be farm-raised.

Lobster lovers have some options for sourcing. When most people think about lobster, they’re thinking of American lobsters — also called Maine lobsters. Not all of these crustaceans are actually from Maine, since lobsters tend to move around and disregard international borders.

However, Seafood Watch suggests avoiding lobster from the Southern New England fishery since the lobster population is in decline in that area. Lobsters from the Gulf of Maine and Georges Bank fisheries are listed as “good alternatives.”

Spiny lobsters, which lack claws, come from the Bahamas, Florida, Baja California and Mexico. They also live in the waters off Brazil, but Seafood Watch suggests avoiding spiny lobsters from that region due to overfishing and other suspect practices. Otherwise, the organization lists spiny lobster as the “best choice” of all the species, considered in terms of sustainability.

For more information about Seafood Watch, visit http://avl.mx/v1 or stop by The Market Place to pick up a pocket guide. (Chef William Dissen has been involved with the organization for several years.)

The Lobster Club is something of a crustacean-focused cooperative. To sign up, just get in touch with Scharf. There are no membership fees. On the last Monday and Tuesday of the month, place orders for pickup on Friday.

Right now, Scharf sells 1 1/4-pounders, although he has access to other weights if demand is high enough, he explains. As The Lobster Club grows, he could sell more products, including lobster tails.

The Lobster Club isn't Scharf's first foray into seafood, although it is the most stripped down. He owned a wholesale seafood business in Pomona, N.Y., in the '70s.

Many years later, when he moved to Asheville to retire, a lobster case in the grocery store brought him back to his time in seafood. “There had to be a market between what they're selling them for and what I could get them for, so I called my people,” he says.

In 2004, he launched Lobstermania, which served hotels and restaurants. But Scharf, being retired, soon realized he wanted out of the fast-paced restaurant game. “I really wanted to deal just with the individuals,” he says. “I'm not looking to make a living from this. I'm just doing it to keep busy.”

Thus, the Lobster Club. In June, Scharf delivered a couple of dozen live American lobsters to his customers for $12 a pound — about $6 or $7 lower than grocery store prices, Xpress confirmed.

The lobsters are captured in the Gulf of Maine and, farther north, in the Gulf of St. Lawrence. Scharf calls in his order and picks up the catch after it’s trucked south. Customers bring their own coolers and bags to transport the live lobsters from the pickup spot.

As for cooking, Scharf can provide recommendations, but he prefers simplicity. “If you want the true taste of lobster, just steam them,” he says “They're easy to steam.”

For more information about The Lobster Club, visit thelobsterclubwnc.com or call Scharf at 696-6555.

2 thoughts on “Lobster for less”