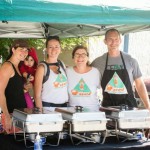 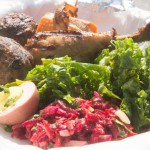 BACK TO BASICS: A paleolithic diet consists of in-season, locally raised, organic meats and vegetables. Photo by Carly Deyton

For many locals, healthy eating means thinking back before the age of processed, imported foods and scouting out only the freshest local, organic ingredients to transfer from farm or garden to plate. One might think the concept of minimally processed, local food runs rampant throughout this environmentally conscious town — it’s Asheville, right? But some area residents are finding it increasingly difficult to stick to their strict “paleolithic” diets in town.

This concept of only consuming local, organic food is exactly the idea behind the paleo diet, which stems from the belief that humans are healthiest when eating in-season food from their own geographical areas, just as the hunters and gatherers did during early human history.

“Basically who we are now genetically and who we were during the Paleolithic period — the differences are marginal,” says Josh Winnecour, who just opened up a new paleo-style food truck, Fuel, on Nov. 6, thanks to a successful Kickstarter campaign. “They certainly didn’t ship food in from other regions. I think our bodies are designed to eat what’s available. It’s the way our bodies are genetically designed to be fed.”

Of course, the term “paleo diet” doesn’t suggest that Ashevilleans should all regress back to cavemen, hunting all and any animals found scurrying about the Blue Ridge Mountains. It does, however, mean eating the simplest of ingredients straight from local farms — no bread, no sugar, no dairy and minimal or smart starches, though according to Winnecour, the specific restrictions do vary from person to person.

“Two years ago, I learned of the term and started researching, just cutting back on grain, added sugar and processed food. I saw a remarkable change in my fitness and health and weight. All of a sudden I had so much more energy in my athletic endeavors, and I didn’t get sick as often. It was definitely an eye-opening experience.”

Many paleo-friendly locals heard of the diet through their involvement with the three area branches of CrossFit, a fitness training program that, simply put, offers varied workouts that focus on strength and conditioning.

“CrossFit is intense,” says Joan Sprinkle, who has been on the paleo diet for about six months. “You have to fuel your body, and you do that with protein and healthy carbs. Paleo is a good way to maintain the energy needed to be successful in the workouts.”

Winnecour estimates there are 1,000 to 2,000 locals who currently consider their eating habits to be paleo, and many others who consider their diets organic, which he says is basically only one step below the paleo diet.

Though there are many area restaurants and grocers that supply the ingredients necessary to facilitate the paleo diet, many paleo dieters have yet to find a location that sports a 100 percent paleo-friendly menu — at least until now.

“There’s really not any [restaurants] here that are paleo-friendly,” Sprinkle said prior to Winnecour’s campaign reaching its required amount of $15,000. “There are lot of restaurants that sell organic food or all-natural, but they don’t put it together in a way that supports a strictly paleo diet.

“A lot of times when I was eating out,” says Sprinkle,”I’d have to get a salad with a chicken breast added to it, with no cheese or dairy-based dressings or sauces. It [would be] really nice to have the Fuel truck so I’ll have choices. I won’t have to worry about if it’s paleo.”

And Sprinkle’s wish has been granted. Winnecour’s food truck opened for business last week, parking for now at the three area CrossFit locations, with its schedule subject to change.

“We’re still working out the details on the schedule and trying to add staff to the team and keep production up and figure it all out,” Winnecour says, mentioning that Ashevilleans can “like” Fuel’s Facebook page to get daily updates on the truck’s location. “Essentially the real work of the business is starting, and we're really fortunate to have the resource of that Kickstarter to make it all work.

Sprinkle is currently in the middle of an eight-week “paleo challenge,” her second strict challenge since starting the diet. She says that while she usually sticks to the general paleo diet, she occasionally has “cheat days” or “cheat meals” because of how difficult it is to find meals at restaurants that are 100 percent diet-friendly (but not during the challenges).

In addition to Fuel, Sprinkle mentions Farm Burger (without the bun) and Posana Café’s kale salad (without cheese) as two places in town that carry options available for her diet, while Winnecour mentions Early Girl Eatery and Over Easy Café’s breakfast bowl as paleo-friendly options. Meanwhile, Sprinkle grocery shops at Greenlife, Earthfare and frequents the Western North Carolina Farmer’s Market for her locally grown and raised produce and meat.

YMCA Healthy Living Instructor Copland Rudolph says she visited Portland, Ore., last year and noticed the growing number of paleo-friendly restaurants and menu items in the area, whereas in Asheville, options are sparse. In town, she recommends the Buddha bowl from Tod’s Tasties with sausage substituted for tempeh, as well as the options mentioned by Sprinkle and Winnecour.

There are many other advantages Ashevilleans see in “going paleo” besides training for CrossFit. “Not only have I seen it improve people's health drastically, but it is a much, much better way of helping the planet,” says local farmer Ashley Sierra. “The thing about paleo is that it supports grass-fed animals and policies that allow for animals to be raised in a way that is moral. This not only helps the animal and the land in multiple ways, but it makes the food more nutritious, whether it be animal food or plant foods grown on the fertile soil.”

Daniel Ballard has just taken up the paleo lifestyle within the past two-and-a-half months. “Besides losing 25 pounds, to be completely honest, I don’t feel tired after I eat,” he says, explaining his weight loss is attributed to both the new diet and the CrossFit training. “I feel full, but I don’t feel tired. You don’t get that insulin crash after you eat a big meal, and you want to take a nap. Doing that in the middle of the day kills your productivity. You don’t have the energy to give it your all. But I’ve noticed since I started paleo, I feel fine. I feel great.”

Paleo dieters around town must remain crafty in order to keep up with the diet. The Paleo Asheville Facebook page currently boasts 303 “likes” and serves as a platform for discussion within the paleo-dieting community, as well as having been the contact point for a potluck the group hosted early last month.

Winnecour says now that his food truck is up and running, he hopes it will help popularize the diet which he and so many others in the community struggle to maintain in such an otherwise food-centric town. The response so far has been very positive.

“I think you can pick your way through some menus in town,” he says. “But it’s a huge effort for anyone who is paleo to eat. You’re constantly trying to figure out what the potential hazards are on the menu. It can be really challenging, and you feel like you’re interrogating the wait staff.

“I think [Fuel] will popularize or maybe normalize paleo eating a little bit more, and it will definitely be a go-to option for folks in terms of eating healthier and clean while not having to worry, ‘How manufactured is my food?’”