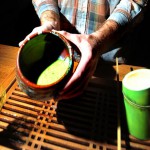 Health elixir: Matcha is very high in chlorophyll, giving it a green tint. 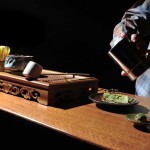 The setup: The tools of the matcha trade at Dobra Tea Room — and a duo of desserts, too. 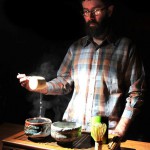 The tea alchemist: Andrew Snavely of Dobra makes a hot bowl of matcha.

In the West, we're likely to associate any kind of powdered food or beverage with inauthenticity. Powdered lemonade, powdered cheese sauce and powdered milk — they all smack of the artificial. Matcha, a dried, finely milled, shade-grown Japanese gyokuro green tea, busts the notion of powdered food as inferior alternative, and is emerging locally as part of the larger national trend. And no wonder: Matcha is super-tea; it's packed full of antioxidants, it boosts the body's metabolism and contains vitamin C, selenium, zinc and magnesium, among other vitamins and minerals.

"Matcha's amazing," says Andrew Snavely, the well-traveled tea aficionado who opened Dobra Tea Room on Lexington Avenue nearly a year ago. Since the entire leaf is consumed, Snavely says, it's especially healthful. Matcha boosts metabolism and burns calories, detoxifies the blood, enhances concentration, lowers blood sugar and more. "The reason that matcha is so nutritious is that you're drinking the leaf in its entirety. You're taking the plant in, so it's a little bit fuller, a little bit more concentrated," he says.

Because it's concentrated, it's also very caffeinated, says Snavely. "But it's very clarifying and very uplifting. It's not a jittery high — it's very mental, kind of like drinking a super-food. It's the super-food of tea — it's very high in chlorophyll."

The key to making a matcha latte that tastes like you bought it in a café or tea shop is to make the matcha first, then add the hot milk and foam.

Put 1 teaspoon of matcha powder into your favorite mug
Cream the matcha by adding 2 oz of hot water and whisking until smooth and creamy (special bamboo whisks are sold specifically for this purpose through Dobra or the Living Qi site)
Pour 5 oz steamed milk into your favorite matcha bowl or teacup (you can steam the milk using a steamer, or just bring it to near boiling)
Add the “creamed” matcha tea to the milk (you may need a milk frother for this step, or a small Aerolatte device)
Scoop foamy milk on top
Sprinkle with matcha powder or cocoa powder

Dobra offers a full-on matcha experience, serving everything from the traditional bowl of hot matcha to truffles made with the tea. The rich chocolates, made by the French Broad Chocolate Lounge, are filled with a creamy white chocolate-and-matcha ganache, dusted with a vibrant sprinkle of the green tea powder. The tea, with its slightly bitter herbal flavor, lends itself well to sweets. You may have already experienced the flavor of matcha without realizing it; most green tea ice cream gets its earthy savoriness and green color from matcha powder.

Snavely hopes to enlist the help of Asheville's Ultimate Ice Cream Company to create a matcha ice cream to add to his comprehensive selection of sweets, many of which mirror what one might find in an actual Japanese tea house. Snavely serves daifukumochi, for example, sweet glutinous rice cakes stuffed with adzuki bean paste, often served with the tea to temper some of its natural astringency.

He also offers a gluten-free matcha cheesecake made by Blue Door Bakery in Candler that has a subtle herbal tang. Dobra can whip up a hot matcha or "hot-cha" (basically a tea latte) or serve the tea in the classic style, frothed with hot water using a special bamboo whisk and served in a bowl. Matcha bubble tea is also available, made with organic tapioca pearls cooked fresh daily by the Dobra crew.

The bubble tea, a bright chlorophyll-green with sweet glutinous dark tapioca pearls submerged in the liquid, is more delicious than it is attractive. Nevertheless, it's already drawn a bit of a following, says Snavely, including some of Asheville's Asian population. That’s especially gratifying to the seasoned tea gatherer, who's spent much of his young career visiting world-renowned tea countries where the leaf is an integral part of the culture. Many of those places are concentrated in the Far East.

As a contrast, the streets are filled with vendors peddling soft-serve matcha cones and bubble tea. Green tea chocolate bars fill the shelves of the convenience stores, proving that matcha consumption can also be a lighthearted affair. "It's just everywhere," Snavely says.

Whisk 1-2 grams of in 4 oz hot water
Make sure matcha is whisked into a froth and no clumps remain
Squeeze the juice of 2-4 fresh lemons into a blender
Fill an 8 oz cup with ice and put into blender
Sweeten matcha with honey if desired (organic honey preferably)
Add matcha to blender
Blend lemon juice, ice and matcha together to desired consistency
Pour into a cup and serve

Matcha is starting to become more prevalent in this corner of the world, too. Bon Appetit magazine’s editor-in-chief, Adam Rapoport, named matcha one of the food trends to watch for 2011. The magazine’s October issue features a number of savory matcha recipes, including matcha- and pistachio-crusted halibut. Locally, Dobra offers wholesale matcha, as does another local online business, Living Qi. The website acts as a comprehensive guide for all things matcha. Living Qi was founded by James Whittle, an acupuncturist at the Blue Ridge Acupuncture Clinic who also imports organic matcha from Japan and is currently writing a book about the tea.

While studying for his graduate degree in Chinese medicine and working at a tea shop on the side, Whittle was invited to the house of a Japanese exchange student to take part in a tea ceremony. There, he was introduced to matcha for the first time. "It was pretty amazing. You feel matcha. It's a mood food," says Whittle. "It puts you into a state of alert relaxation."

Whittle says that the rise of the tea powder’s popularity is due to a convergence of trends, including a focus on the antioxidant capabilities of food, an awareness of green tea as medicinal herb, and a turning away from sugar-filled energy drinks. “People are wising up to the whole Red Bull high-caffeine energy drink phenomenon, and they want solutions to that,” says Whittle. “All of those forces are converging to place matcha strategically in the mix.”

Want to give matcha a try before you buy? Dobra Tea Room features “Matcha Mondays” from 10 a.m. until 1 p.m. every Monday. During that time, a bowl of matcha costs $3. Dobra is located at 78 N. Lexington Ave. For more information, visit http://www.dobrateanc.com.