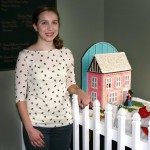 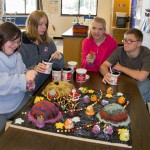 PUTTING IT TOGETHER: Annie Joyce’s special-education students at Reynolds High constructed their own entry for this year’s National Gingerbread House Competition. Their creation made it into the Top 10 in their category. Photo by Jenni Wiseman 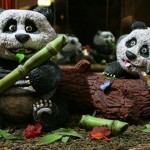 There’s something about the smell of gingerbread that transports me back to childhood, at home on winter break, baking walls and roof pieces in the oven with my mom and brother, the sweet aroma filling the kitchen as we mixed up batches of colored frosting in anticipation of building our edible creations. In homage to delicious memories old and new and in the sweet spirit of the season, The Omni Grove Park Inn has welcomed competitors from all over the country (and one from Canada) to the 21st annual National Gingerbread House Competition.

The contest began in 1992 as more of a fun display of local talent to share with the inn’s patrons than a competition. Over the years, however, it has evolved into a rigorous, competitive event that draws participants from far and wide to vie for awards in the adult, teen, youth and child contests. Still, the heart of the competition remains true to its roots, inspiring people to come together for a fun and creative project in celebration of the season. Hilary Thomas, guest activities and events coordinator for The Omni Grove Park Inn, helps the competitors every step of the way and gets to experience the community that arises around each year’s event.

“I’ve been communicating with all these competitors from start to finish, from the moment they turn in their entry form,” says Thomas. “To see them arrive — and they’re so excited — and to see the finished product … you don’t even know each other, but you greet each other with hugs because you’ve been communicating for months. That’s probably my favorite part, just getting to know the competitors and seeing that they’re in it for the right reasons.”

Every entry arrives with a unique story to tell beyond its crunchy walls and candied accouterments. Special-education teacher Annie Joyce from Reynolds High School, who teaches students with moderate to severe disabilities, entered this year’s competition with her class. “The inspiration behind deciding to do this project was an opportunity for my class to be represented in the community,” says Joyce. “I feel that this population often gets overlooked by society. By doing this project as a class, it gives us the opportunity to be a part of a nationally recognized competition. This is a priceless opportunity for each of them.”

Joyce’s class has participated in the competition for the past four years. Their entry this year — an outer-space-themed creation — placed in the Top 10 in the youth category. According to Joyce, participating in the competition is one of the kids’ favorite activities. “We all come up with an idea and then go on a shopping field trip to buy supplies,” she says.

For this year’s space-themed creation, Joyce says they used circle molds to make the planets and cake-pop molds to make the aliens and reindeer, then dipped the aliens and reindeer in melted chocolate. The students chose different eyes and candies for decorations. “The hardest part for us is working as a team and agreeing on each part,” she says. “The best part is seeing the finished product and knowing how much work everyone put into the house.”

Student Kristina Pressley says her favorite part was making the spaceship, while Tyler Ayers and Alexis Strosnider say they most enjoyed decorating the aliens and making the reindeer, respectively. “I liked it when we sprayed the planets with icing to make them different colors,” adds Beth Moseley.

Teenager Lilli McFerrin of Black Mountain has been a lifelong fan of building gingerbread houses and is a multiyear entrant to the National Gingerbread House Competition. This year she won third place in the teen category. “I have been making gingerbread houses for as long as I can remember,” says McFerrin, “But 2006 was the first year I entered the competition. … This was my eighth and final year to enter before I go to college. … I sometimes joke by saying that everything I ever needed to know, I learned from gingerbread. Most things I have learned through trial and error, and, over time, I've slowly developed a style and a familiarity with the materials and techniques that work best.”

McFerrin says making a gingerbread house is a long process, but it is also fun and rewarding. “There are, of course, ups and downs,” she says, “but my favorite part is watching as the 2D picture in my head slowly becomes a tangible, 3D object [that] other people can enjoy. For me, it is all about the joy of creating and the joy of seeing other people enjoying my work.”

Joy is the most consistent theme among staff and contestants, but there are also some nerve-wracking moments that arise as part of the process. Tracey Johnston-Crum, director of public relations and community outreach for the inn, says transporting the creations is one of the competitors’ biggest challenges.

“Travel [with] these gingerbread houses is not easy,” says Johnston-Crum. “They spend hours upon hours, months upon months constructing this … but getting it here is not always the easiest part, so you see a lot of heartbreak, too. … One wrong bump, and you could lose a house. … We have a great triage center that has royal icing and things like that to help people stick it back together if they can.”

McFerrin, whose winning piece had the film “Mary Poppins” as its theme, says the drive over from Black Mountain was very stressful. “We set it on a little cushion and that helped absorb some of the shock. The whole time, [Mary Poppins’] little umbrella was wobbling back and forth, and I was like, ‘Oh my gosh! This is terrible!’ … It was such a relief to get it here and on the table where it’s supposed to be.”

This year’s grand-prize winner, Kim Thalman, drove all the way from Wisconsin with her entry. “I transported the piece completely finished. We were lucky enough to get a rental van that had a well in the trunk that fit the board perfectly. The only support I used was a blanket underneath to help cushion [the piece and] soften the jostling. After that, I just crossed my fingers for no breakage, and away we went.”

The inn also offered a special prize for the contestant who traveled the greatest distance to compete. Gail Rice, who flew from her home in Pleasanton, Calif., and created her entry in Asheville, was the winner of that award this year.

“The people of Asheville are gracious and sweet,” Rice says. “Southern hospitality is as good as it gets in Asheville. I feel very honored to have won.”

Head on over and marvel at these heartfelt and often astonishingly well-made creations, and let the smell of gingerbread transport you to memories of snow days, crackling fires and cozy times with the ones you love.

The National Gingerbread House Competition had around 175 entries this year and 150 pieces that actually arrived on site. Anyone can enter, and all pieces are displayed. If you have the chance, take an hour out of your day between now and Jan. 2 and make your way over to The Omni Grove Park Inn to share in a little bit of the joy that each participant put into these projects.

Admission is $10 per car, no matter how many people you pack in, and 50 percent of all proceeds go to local charities.

Haley Steinhardt is a freelance writer for the Mountain Xpress. She also owns and operates Soul Tree Publications (soultreepublications.com), a publishing support business in West Asheville.
View all posts by Haley Steinhardt →