Last week, Urban Dharma, the Tibetan Buddhist Center on Page Street in downtown Asheville, celebrated its fifth anniversary with a week-long schedule of programs, including the construction of a special Vasudhārā sand mandala. In Tibetan Buddhism, Vasudhārā is the deity of abundance, openheartedness, generosity and magnanimity.

Throughout the week, the Asheville community was invited to watch the construction of the sand mandala by Khenpo Chophel, of the Three Rivers Tibetan Cultural Center in Pittsburgh, Lama Konchok Sonam of Drikung Meditation Center in Boston, Mass., and Dr. Hun Lye, the spiritual director of Urban Dharma. Construction of the sand mandala began on Saturday, Oct. 1, and ended with a dissolution ceremony on Saturday, Oct. 8. The event culminated with a ritual offering and release of the sand into the French Broad River. 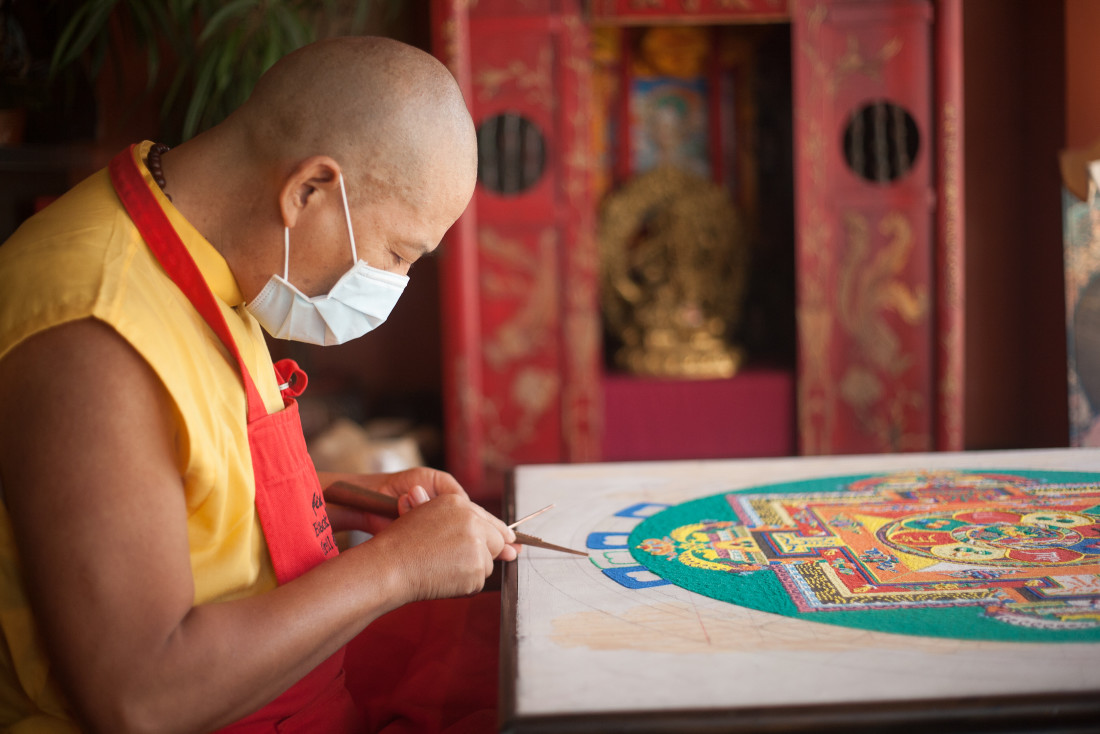 From Saturday, Oct. 1, to Thursday, Oct. 6, the lamas worked intricately on the sand mandala. Here, Lama Sonam returns to work after a lunch break. The lamas worked from 10 a.m.-noon and 2-5 p.m. each day. 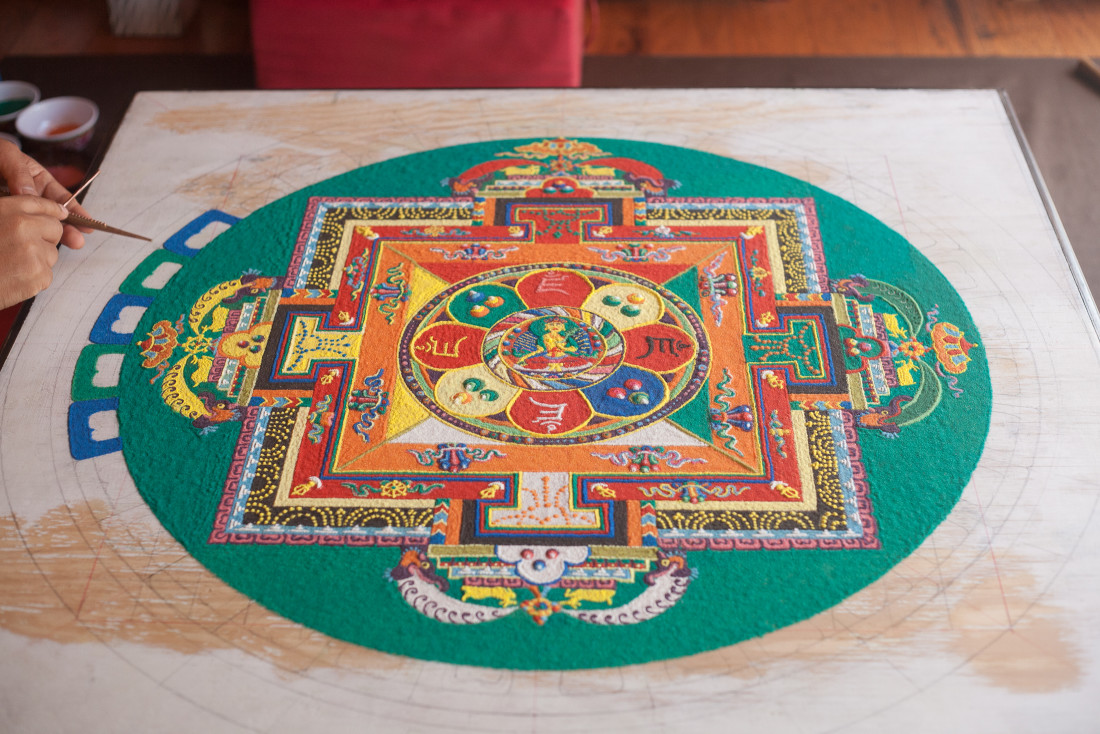 The Vasudhārā sand mandala featured “the Lady Vasudhārā sitting in the center,” says Hun Lye, “and emanating out in the four directions are the Lords of Abundance – White Jambhala riding on a dragon, Yellow Jambhala in the regal pose, six-armed Red Jambhala with Kurukulle in his heart and Black Jambhala with a wrathful gait.” 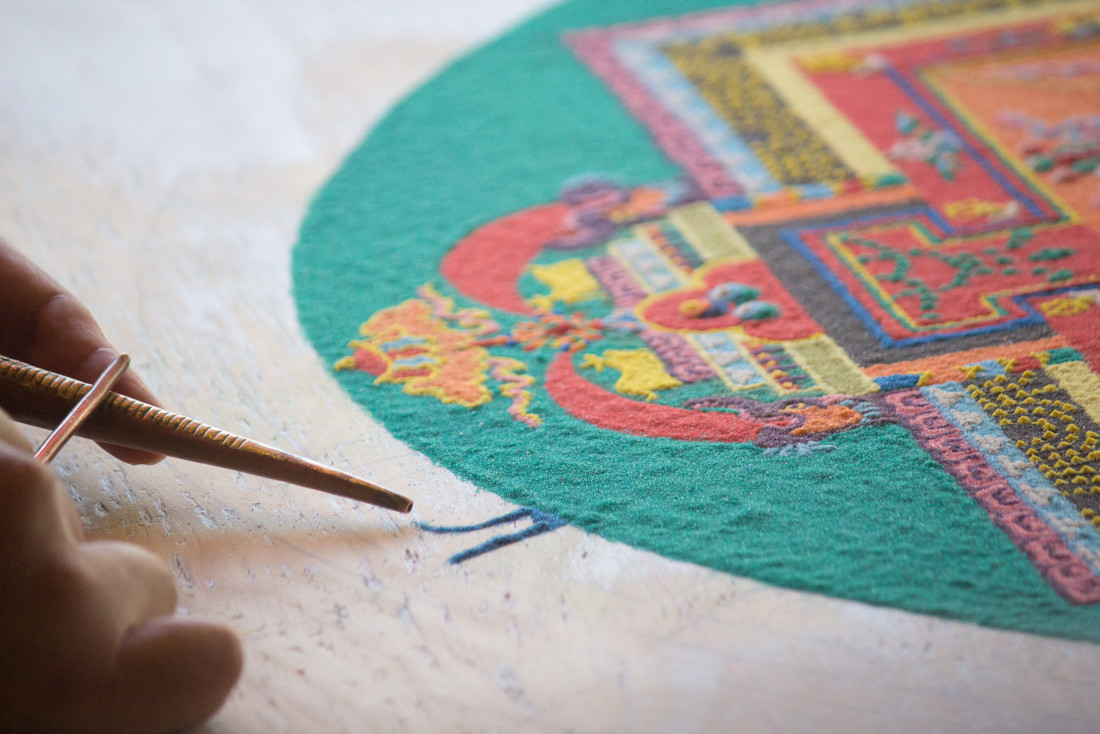 “The actual construction of the mandala is a lesson in devotion, concentration, grace and patience,” Hun Lye says. 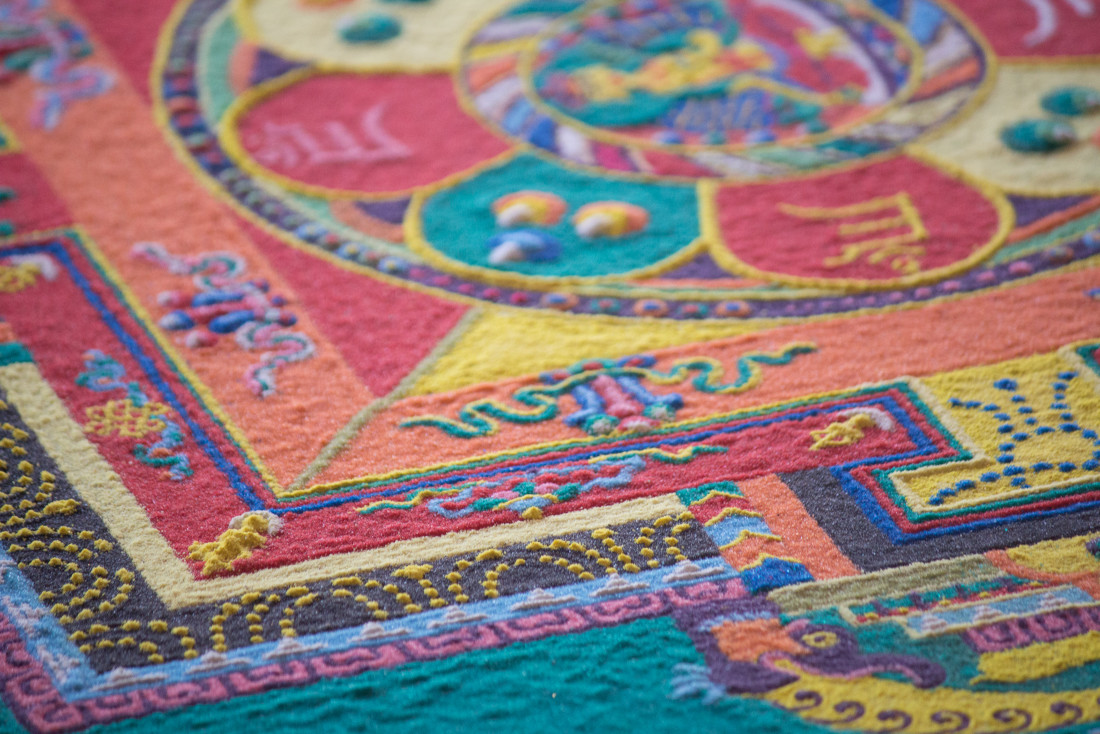 “While the overall structure of the mandala is pre-set, the colors and other elements of design were chosen by Khenpo Chopel,” says Hun Lye. 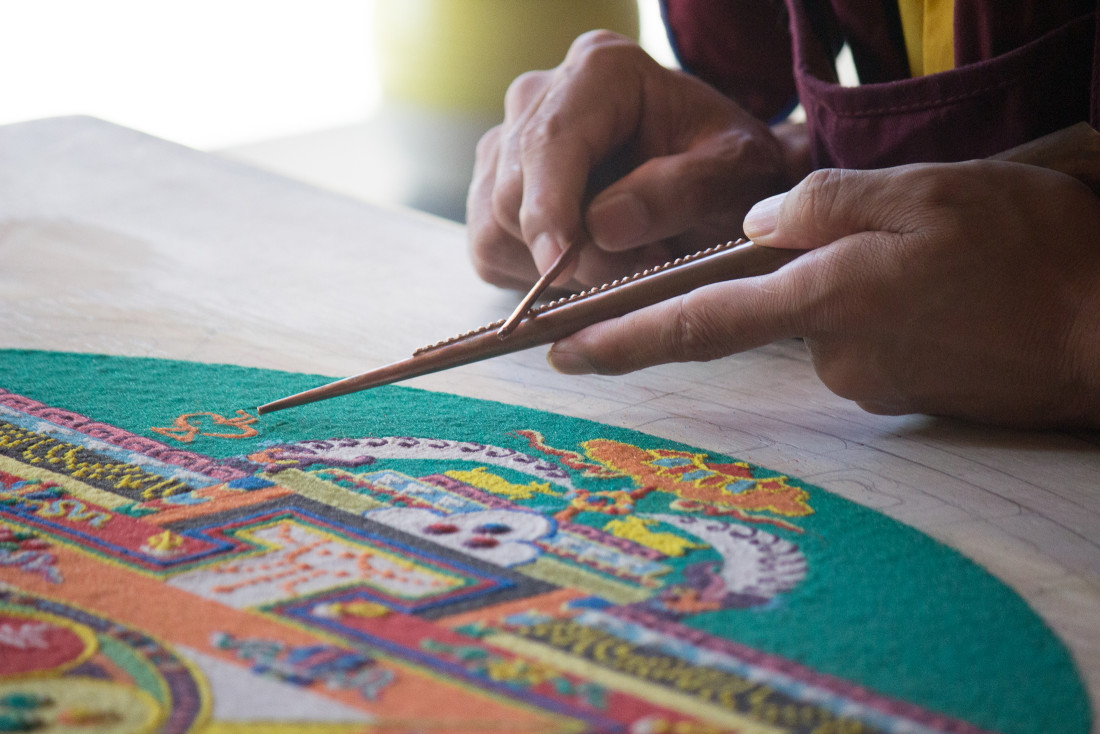 Using a traditional Tibetan tool called a chakpur, the lamas were able to disperse the sand in a controlled way. There were also specific tools to handle any mistakes. 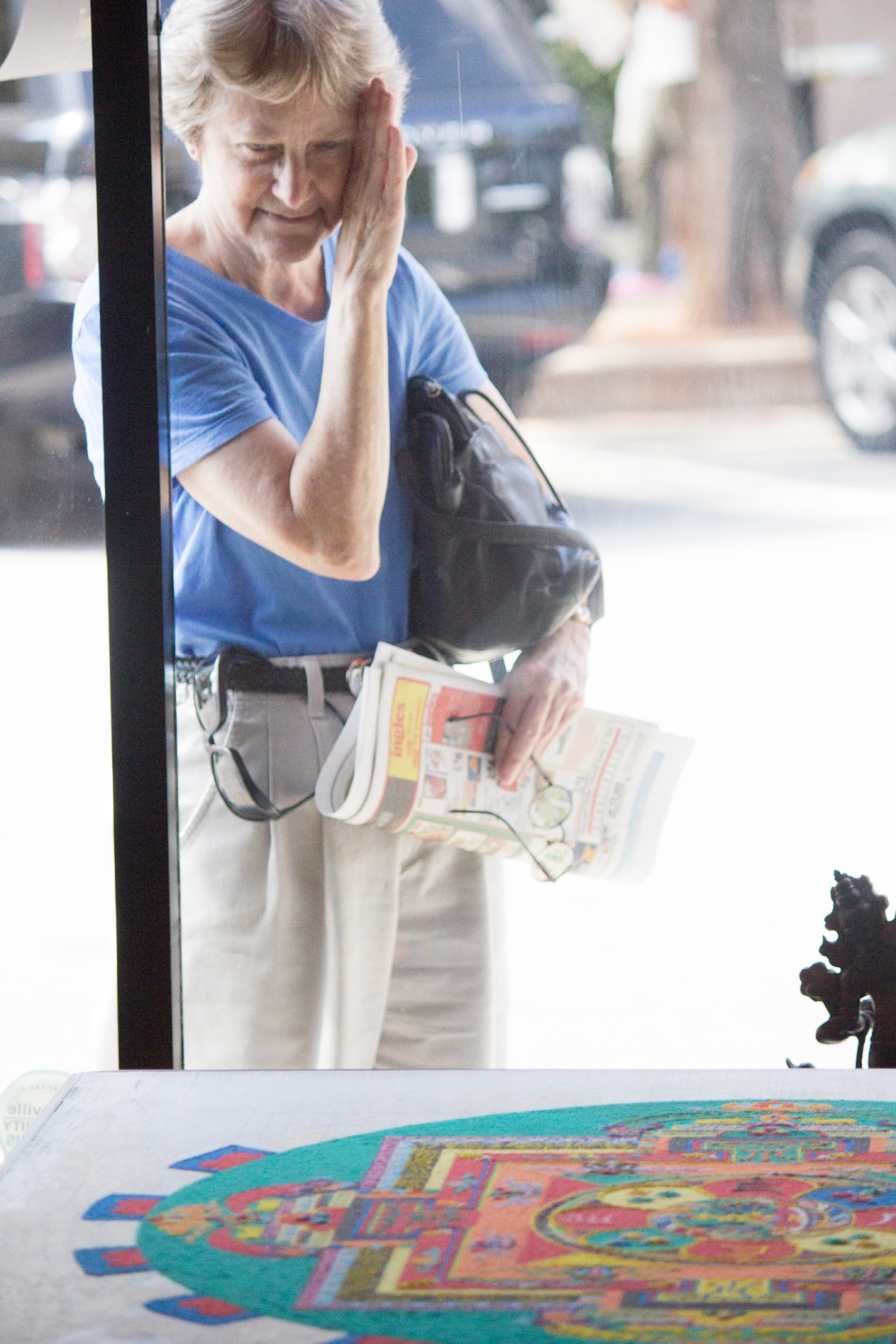 The entire process of creating the mandala happened in the window front of Urban Dharma’s center, so onlookers were able to take a peek streetside or come inside to learn more about the process. 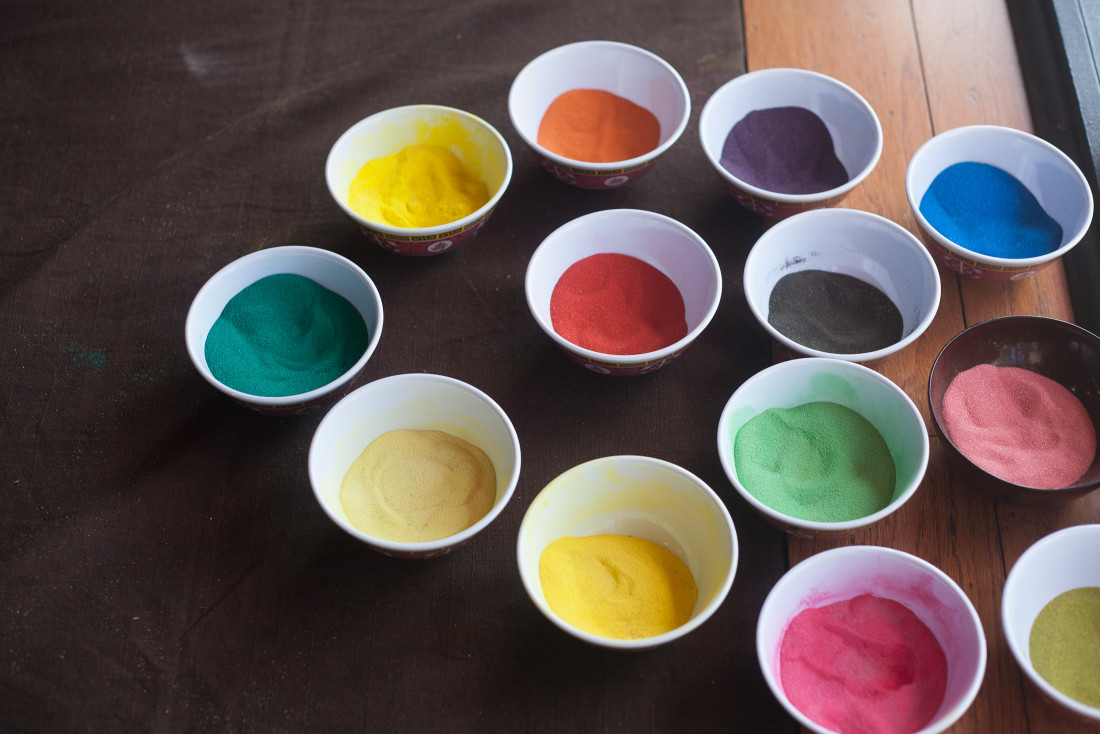 The bright palette of colors came together to make the mandala. 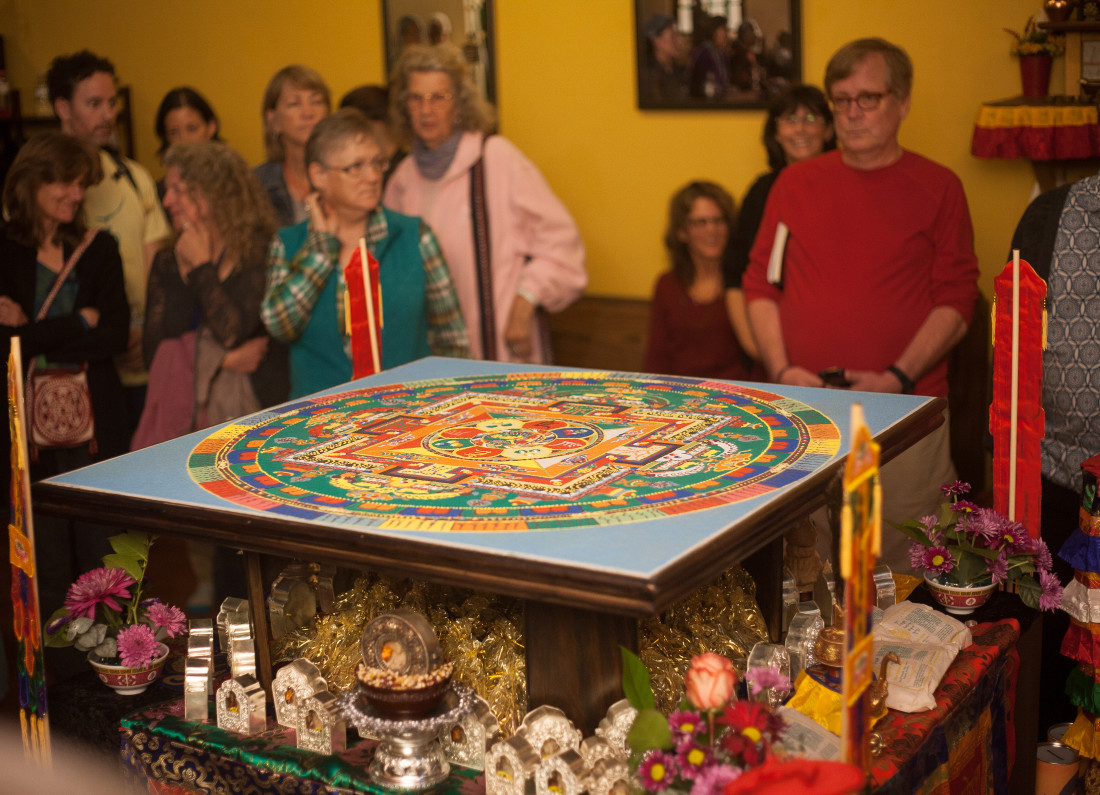 On Friday, Oct. 7 and Saturday, Oct. 8, the sand mandala was moved from the window to be displayed on a special shrine. 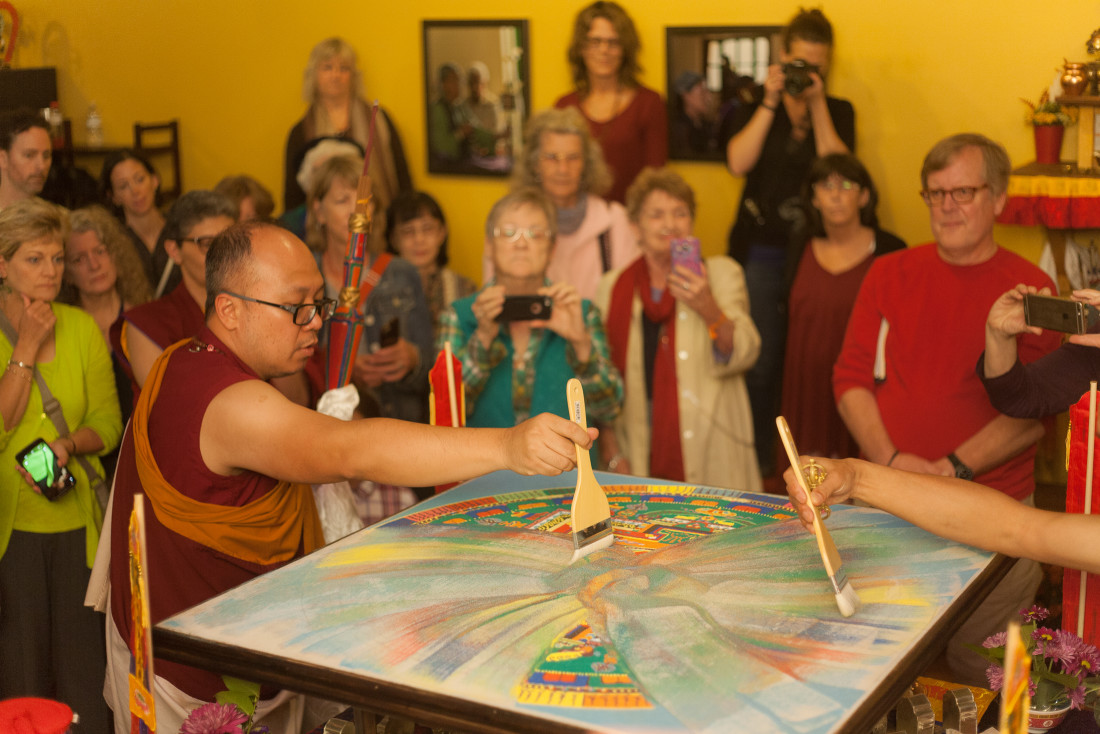 Hun Lye and Khenpo Chopel dissolved the mandala in artful brush strokes toward the center. 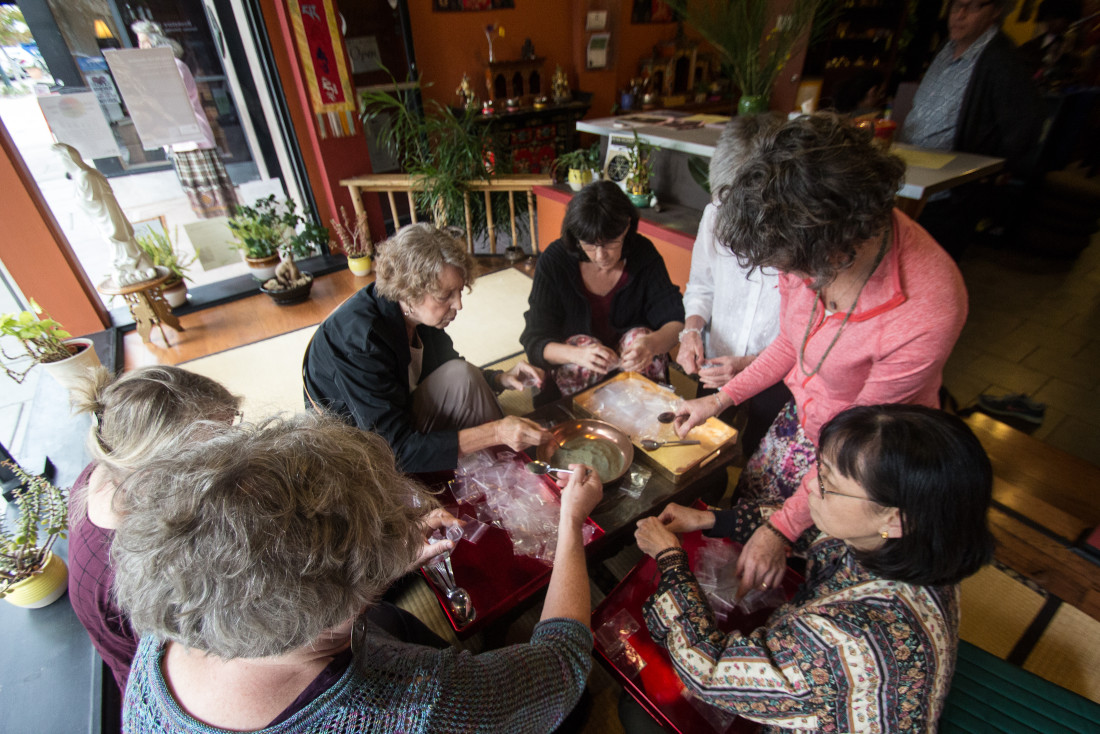 Female members of the Urban Dharma community quickly packed some of the sand into small bags to be given away to participants at the French Broad River. 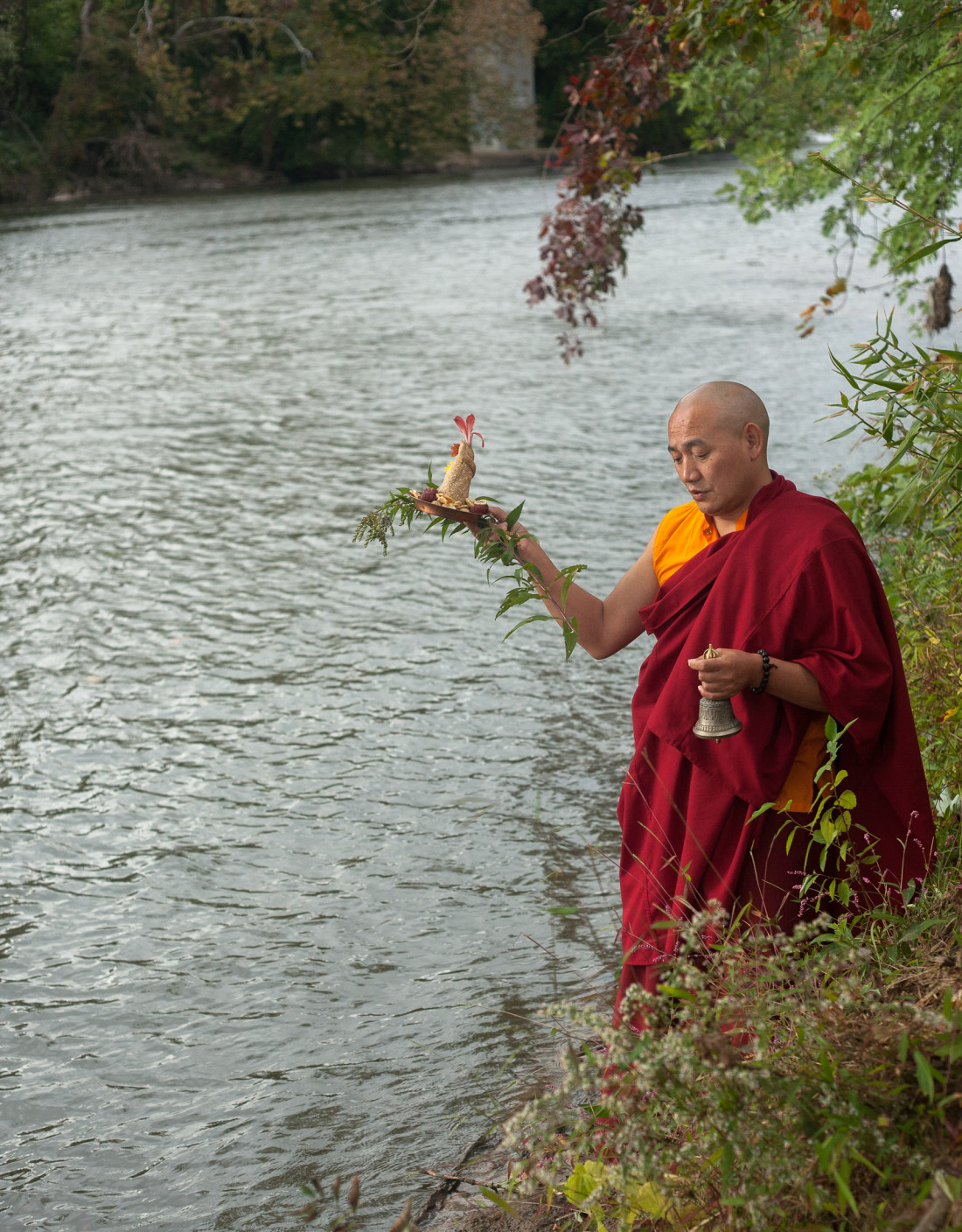 Around 4 p.m. Saturday, Oct. 8, the Urban Dharma community gathered beside the French Broad River and watched as Lama Dorji Norbu released a traditional offering into the river. 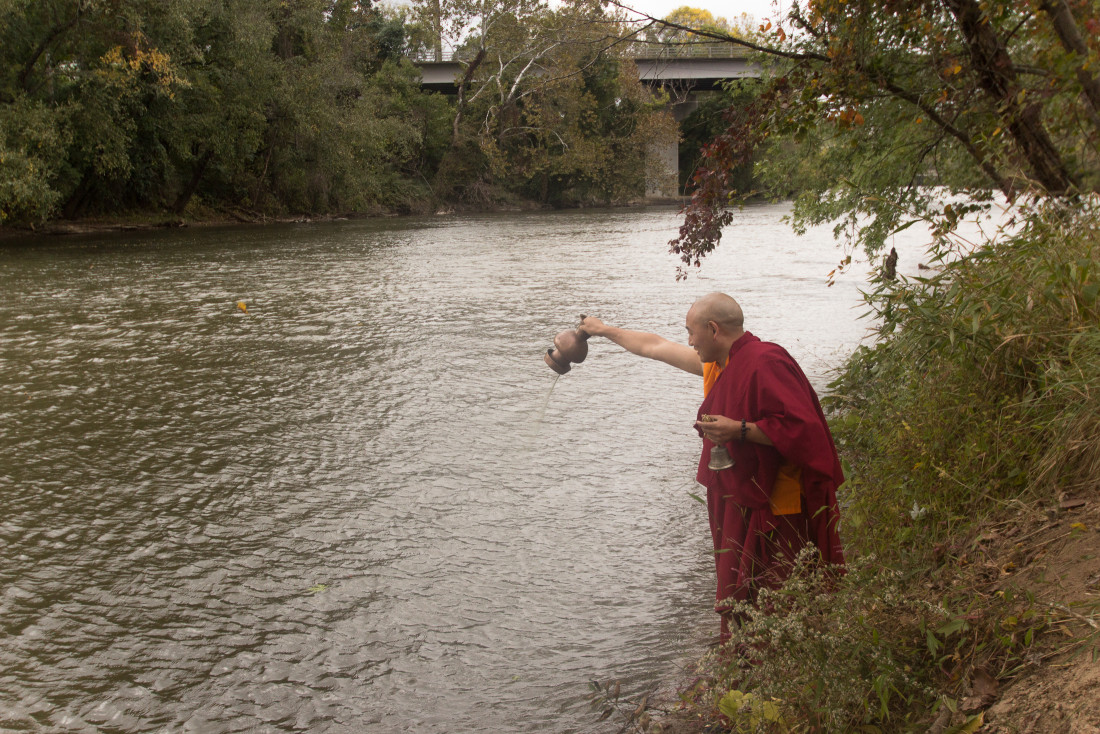 Hun Lye says the French Broad river was chosen as the place to release the sand because “the river will take the blessings into the ocean, thus distributing the blessings universally without any partiality or limits.” 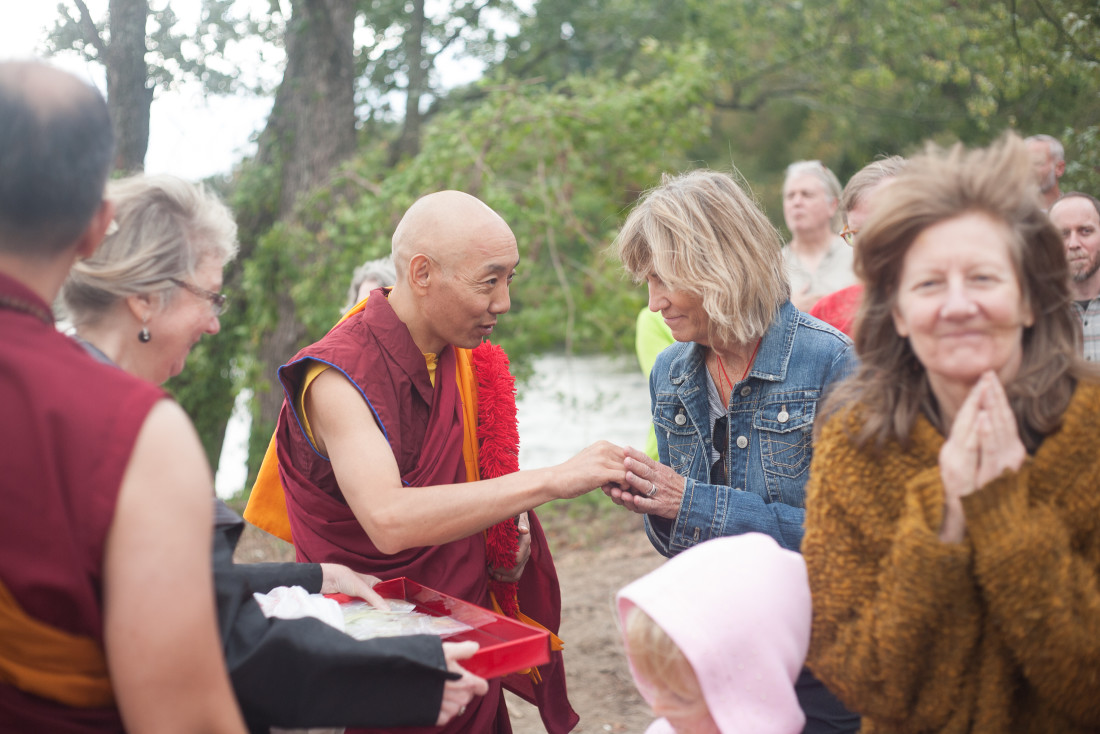 Khenpo Chopel and Hun Lye handed out small bags of sand to all who attended the dissolution. 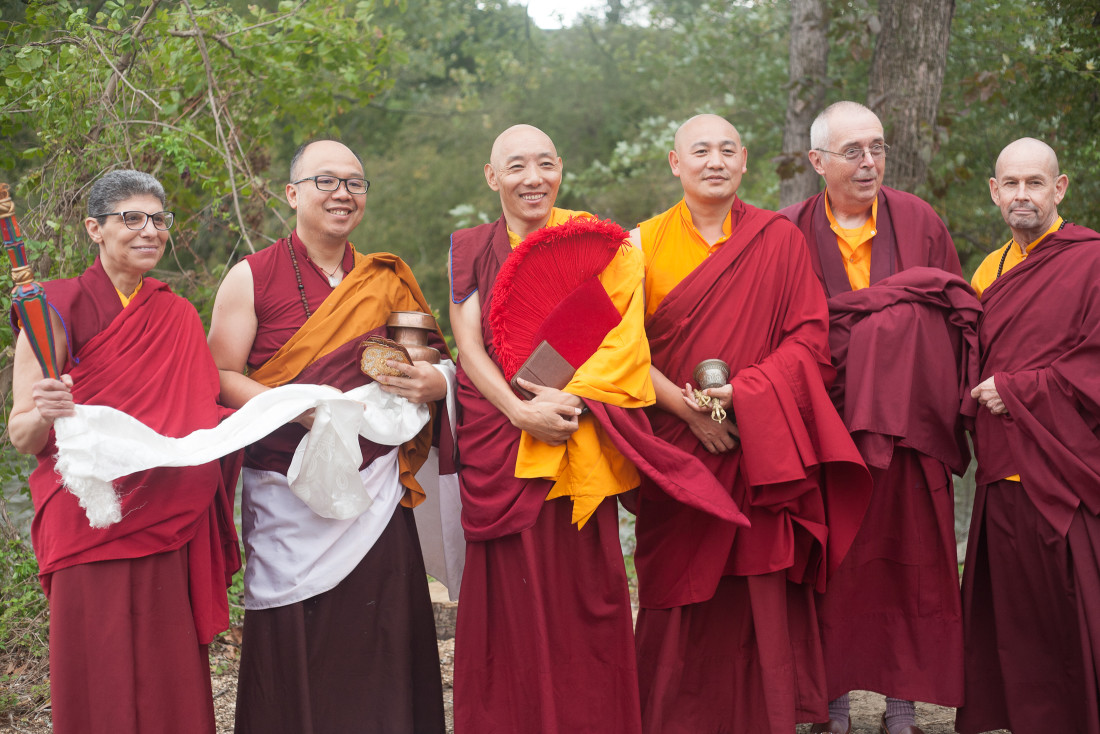 From left, Ani Tsultrim Lhamo, Hun Lye, Khenpo Chopel, Lama Dorji Norbu, Konchog Ngedön and Konchog Tsering gather for a group photo near the place the sand was released into the river.

Emily Nichols is a writer and photographer for the Mountain Xpress. She enjoys writing about wellness and spirituality in WNC.
View all posts by Emily Nichols →