It’s Tuesday night at the Bywater, a riverside bar in Asheville, and patrons sit in clusters under the stars. The largest group occupies one corner of the fenced-in compound next to an area marked off with orange ribbon. Suddenly, a man steps into this improvised ring and lights the grouped wicks at both ends of the staff he’s carrying. When the wicks burst into flame, he begins to spin the staff — around his hands, his arms, his shoulders and his waist — in a hypnotic series of patterns.

When the wicks burn out, he stops, earning a smattering of applause. Without bowing or otherwise acknowledging the end of his performance, he steps out of the ring. A young woman quietly takes his place, lights the wicks on her hoop and begins to spin.

This is the scene at the Bywater fire-spinning session. It’s one of several weekly gatherings in Asheville for people practicing a hybrid of exercise and meditation known as flow arts, the manipulation of props in order to trigger the mental state of flow.

Deven Eldreth, a flow artist from Asheville who organizes the Bywater gathering, explains: “When people talk about flow, they’re talking about that mind state where you’re doing something without thinking about doing it, having that mental release of not being focused on anything in particular and just moving your body.”

However, Paul Van Heden, who organizes a jam for hoopers at the Asheville YMCA on Thursday nights, stresses that flow artists are not dervishes. They don’t rely simply on repetitive movement to induce a meditative state. Instead, flow artists find themselves attracted to the practice because that mind state won’t come until “you’ve mastered your prop to the point where you can act without thinking,” he says.

Not all props involve playing with fire. “There’s a type of flow arts for everybody,” says Jennifer Jeter, who attends Van Heden’s Thursday hoop jam. Jeter’s preferred props include silks and fans. Other props used by flow artists include hoops, poi (balls at the end of strings), wands, staffs and most objects used by jugglers. As evidenced by the Bywater gathering, some flow artists do like to set their props on fire. The flow-arts community has developed rules for fire safety, but, as Van Heden puts it, “Getting set on fire improves focus.” 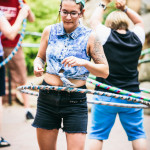 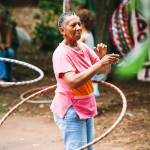 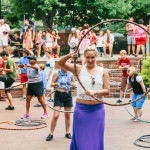 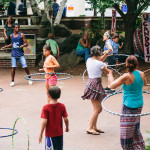 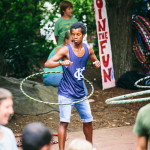 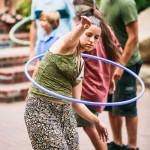 Talk to flow artists, and they will tout flow arts as exercise. “You’re not sitting down anymore — you’re moving,” says Melanie McNeil, who organizes a hoop gathering at Pritchard Park on Tuesday evenings. “It’s a low-impact cardiovascular workout,” says McNeil. And hooping and flow arts in general offer muscle strengthening and toning, “not just on the core, but on the arms and the legs,” she adds, depending on the routine.

Jeter, who discovered the YMCA hoop jam when she got bored with other exercise, concurs. Working with her fans, she says, “takes a surprising amount of arm strength. Five minutes of that isn’t bad, but try doing that for an hour.”

Still, flow artists wax most eloquent on the mental benefits of inducing flow. Tom Linton, whose dragon-staff routine led off a recent session at the Bywater, puts it this way: “You’re not worried about anything other than what’s going on in that moment. For me, it’s a huge stress reliever.” McNeil, a social worker who encourages her mental health clients to hoop, says that flow arts are “meditation in motion. You’re not worrying, you’re not sad, you’re not lonely, you’re just tuned in.”

As a meditative practice, flow arts are unusual because they provide an opportunity for performance as well. Fire spinners in particular work to create spectacular effects. “People love to watch it,” says Eldreth. “It’s nice to have that performance aspect.” In part, it’s the showmanship that has led to flow arts’ expanding appeal. “Some clubs have an LED-gets-in-free policy,” says Van Heden, since flow artists with LED-lit props offer clubgoers some spectacle and inspire a higher vibration among those dancing.

Paired with its mental and physical benefits, this social aspect of flow arts renders it unique. Most flow-arts gatherings attract dozens of people. McNeil has learned to bring “piles” of hoops with her when she does her routines in public because passers-by consider her performance as an invitation to hoop. “I can hoop alone,” says McNeil, “but hooping almost always generates a crowd.”

3 thoughts on “Meditation in motion: Local flow artists use props for mental and physical health”