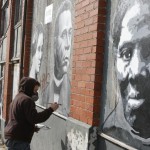 Painting the way: Members of the Asheville Mural Project installed portraits of historical African American figures last week at the corner of Eagle and Market Streets in downtown Asheville. Photos by Jonathan Welch 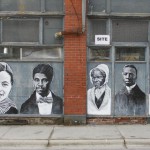 Days after a break was detected in the 36-inch diameter main line that runs from two treatment plants in Black Mountain, thousands of city and county residents still had murky, brown tap water. The leak and its subsequent repair caused "near-record problems with water service," reported the Asheville Citizen-Times. According to "Asheville Water Woes Persist," the discolored water caused some businesses to shut down and forced Mission Hospital to truck in thousands of gallons of drinking water from out of town.

City officials explained that the water's brown color was caused by sediment deposits that built up in the pipes over time and broke free when a valve broke. But officials seemed to offer contradictory statements throughout the week regarding the water's safety.

In the Citizen-Times article, City Water Resources Director Steve Shoaf was quoted as saying that the water wasn't dangerous. However, he also cautioned that "customers should avoid ingesting it until it is clear again."

And in the online post, "Do Not Use Discolored City Water for Cooking or Drinking," Xpress published a press release from the city that again urged residents to avoid consuming discolored water. It also advised not to wash clothing with the water "because it may cause stains."

In another health scare that garnered headlines, Xpress reported "Norovirus Confirmed at Local VA" According to the online post, the Charles George VA Medical Center in east Asheville issued a statement declaring that "the norovirus is extremely contagious so the VA Medical Center has been taking a number of precautions since the infection was first reported. …

"Patients who develop symptoms of vomiting or diarrhea are being placed in isolation immediately," it continued.

According to the Centers for Disease Control and Prevention, noroviruses are “a group of related, single-stranded RNA, non-enveloped viruses that cause acute gastroenteritis in humans.” At this writing, no confirmed cases had been reported outside of the facility.

In better news related to the veteran’s facility, the Citizen-Times published "VA in Asheville Increases Services for Women."

"With more women than ever in the military, the VA is trying to shed its male-centric attitude and make its medical centers more palatable for female veterans," reported the article. "In Asheville, the number of female veterans seeking medical care at the VA doubled in the past 15 years."

To deal with that growing demand, the hospital "added a full-time gynecologist and women veteran's program manager in recent years and plans to add a full-time primary care doctor."

Meanwhile, over in Haywood County, the Smoky Mountain News — which recently snatched up 14 awards from the North Carolina Press Association — reported on a little-known state budget issue that could have a multi-million-dollar impact on counties throughout Western North Carolina. In "Golden LEAF on the Chopping Block," the weekly paper detailed how a Republican proposal in the state Senate would "raid the coffers" of a grant fund that was set up 12 years ago to "help tobacco-dependent communities transition away from the ever-diminishing returns of the once-bumper crop."

Over the years, the Golden LEAF foundation has taken in $867 million in proceeds from a multi-state lawsuit against tobacco companies and doled out much of it as grants and scholarships to WNC organizations. The Republican proposal calls for using this year's allocation of funds to help balance the state's projected budget deficit of $2.4 billion, according to the article.

And in other crime news, the Citizen-Times reported "Deputies Raid Store Near Asheville on Gambling Charges."

"Sheriff's detectives on Tuesday raided a business on New Leicester Highway, seizing more than $3,700 in cash and five video terminals they said were used for illegal gambling," according to the article. "The raid is likely the first in North Carolina under a new law aimed at banning video ‘sweepstakes’ machines that took the place of video poker when the state made those games illegal."

The raid was spurred after an undercover deputy played $20 at Lucky's Sweepstakes on Monday and got a payout of $21. Owners of the business said they didn't think the machines were illegal.