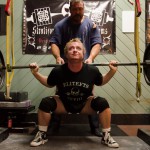 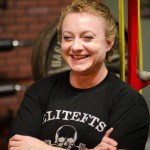 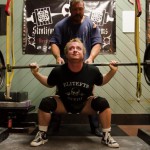 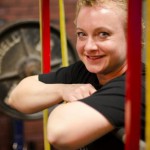 Powerlifter Jennifer Payne continued her workouts through her cancer diagnosis and treatment. Photos by Josh Vaughn

Jennifer Payne wraps her wrist tightly in elastic straps, her eyes focused straight ahead. Rock music crackles softly from a speaker set in plywood next to a bank of beat up lockers. The weight room, tucked away in the corner of the bottom floor of Biltmore Fitness, is all rubber mats, dust and tons of iron and steel. Payne lies back on the weight bench and slides underneath a bar that is labored with 175 pounds.

“You see that arch?” says fellow powerlifter Mark Ferris, noting the rainbowlike curve of Payne’s back. “That's a perfect arch. See how she rolls her shoulders back? Greatly reduces the odds of a shoulder injury. Takes some guys years to get that down.”

Payne’s spotter, Keith Mackey, chants encouragement as she positions her hands on the bar, her expression implacable. “All right,” says Mackey. “One. Two. Three.” He lifts the bar off and lets it settle on her arms. She pauses briefly and knocks out five repetitions as easily as if she were lifting a heavy broomstick.

As Payne moves into the final phase of the workout, Ferris gives me a tour of the gym. About a dozen powerlifters have been working out at Biltmore Fitness since 2009, he explains. There are 100-pound plate weights, resistance bands, and chains with links the size of small fists and heavy enough to stave a man’s head in. Dozens of weight bars sit adjacent to a medieval-looking squat rack. The squat rack has hinged hooks that hold up the weight bar so lifters don't have to reset themselves with weight that often exceeds half a ton. All the equipment is competition quality.

“We have pro meets here,” says Ferris. “People come from all over to compete.”

Payne, meanwhile, is working on her bench-press form, using wooden blocks of varying thickness to isolate specific portions of the lift. On her last set, the bar bears 230 pounds. She holds it steady and drops it 2 inches or so until the bar grazes the block, then she forces it back up.

“It’s just to help with that final push,” says Ferris. “If you can get the bar all the way down and up, but you can't finish that last bit, well, you’ve just failed the lift.”

Payne clangs the bar back onto its supports, grunts and sits up, her face flushed. Her hair is golden blond, cut short, as it was when it first started coming back after chemotherapy. It has been six months since the 41-year-old was declared cancer-free.

Payne has been lifting, in some form, since adolescence. “When I was a kid, I’d watch pro wrestling with my dad. My favorite was Nikita Koloff, and, you know,” she says, laughing, “I wanted my traps to look like his. So I started messing around with my dad’s weights.”

Payne says she liked training in weight rooms. “I tried out for sports, but I never got on the field. In the weight room, though, I always excelled. I started really hitting it after high school, doing mostly the bodybuilder stuff everyone does. Slowly but surely I got roped into powerlifting.” By her late 20s, she realized her “numbers were good enough” to compete.

Powerlifting competitions break down into weight class, age, lift class and lift types. The lift classes are centered on experience and expertise — Payne, for example, is classified as a “master” lifter, competing in the 40- to 44-year-old bracket. The lift types are bench press, squat and deadlift.

Payne participated in her first meet at age 27, in “full power” mode, meaning she competed in all three lifts. Each lift is judged strictly: Form must be correct, and the lift must be completed according to guidelines. Shuffling feet, moving certain parts of the body and incorrect posture are all are grounds for disqualification. Payne’s first meet was a smashing success. “Heck, it's still on the books somewhere,” she says. Payne kept competing and averages two meets a year. A few of those competitions are local; most take place in nearby states like Tennessee and South Carolina.

It was in October 2012 when she found the lump. Soon after, she was diagnosed with breast cancer. “I was lucky enough to catch it early,” says Payne. “The doctors came in and showed me the percentages, told me what we had to do, what was necessary. But I really just felt … cheated. I mean, I took good care of myself. I went to the gym. I was very active. I kept asking, you know, what more could I have done?”

Payne’s diagnosis began a battle that would consume three-quarters of the next year. She went through surgery that November, followed by six months of chemotherapy. Finally, after a two-week hiatus, she did a seven-week round of radiation. “I expected my hair to fall out, and it did,” she says. “I actually bought a couple of wigs, but I don’t think I wore them once. Just put a bandana on.”

At that juncture, Payne faced a choice. Her passion for lifting was taxing on the body and commanded a supreme physicality and high levels of intricate physiological training — exactly the kind of thing cancer treatment attacks. She had a choice to give up powerlifting, at least during treatment. The decision was a simple one: Keep lifting. In April 2013, the International Powerlifting Association (IPA), of which Payne is a member, was sponsoring the Rebel Powerlifting and Bench Press Championships in Greenville, S.C., right between the end of her chemotherapy regimen and the beginning of the radiation treatments.

For most of her career, Payne’s “totals” — the combined amount of weight a lifter pulls at a match for the three main lifts — exceeded 1,000 pounds. By the time the meet arrived in April, that number had significantly decreased. She didn’t stop.

Someone had the foresight to collect video of her lifts at this meet, which is still available on YouTube. In each clip, Payne’s head is swathed in a fierce red bandana. She powers through all three major lifts with an expert’s impeccable technique. By all appearances, it is not even much of a struggle. Payne finished the meet with an 810-pound total — a number that placed her not only at the top in the master lifting class, but overall for the entire women's division. In the process, she broke an IPA record in her class and age group. The record still stands.

“Oh, man,” recalls Ferris. “If you had seen that meet, if you'd been there. I can’t even describe it. She finished her lifts and got a standing ovation.”

“I had a woman come up to me at the meet,” Payne remembers. “She was crying, and she had all these pictures of her daughter, who was going through chemo. And this girl was in a bed, in all of them. She asked me how I was doing this. I just said, ‘You know, I can't let it take everything from me.’”

On March 28, Payne will be participating in Relentless, a powerlifting competition in Minnesota that raises money for Hopekids, which provides activities for children with debilitating illnesses that families would otherwise not be able to afford, often due to the burgeoning cost of medical treatments. “Sometimes it's just little things, like movie tickets,” Payne says. “When you’re going to treatments every other week … suddenly affording a movie is a lot more difficult.”

The meet is invitation-only, and each lifter must raise $500, which will be disseminated to the children. Payne was surprised and honored when Hopekids gave her a call. “I met Kathy [Johnson, who is one of the organizers] and her husband after she called me. She said she was aware of me as a powerlifter that worked through cancer, and she wondered if I was interested in competing in the meet. I was quite honored, but I almost didn’t go. I wasn’t close to 100 percent yet, though Kathy was clear that it didn’t matter.”

In the end, she decided that she “didn't want to miss out on an opportunity to be on such a platform. I mean, these are some of the best lifters in the country coming together to raise money for such a great cause.”

For a cancer survivor, the future is always uncertain — but that only spurs Payne forward. The ramifications from surgery and treatment are lifelong, but she always has one thing she can rely on: “The biggest thing [lifting has] done for me? Perseverance. Learning to persevere through obstacles.

“I mean, when you’re there — on the bench or at a meet — it doesn’t matter what your education level is, what car you showed up in or how you look. It's just you, on the platform, with the weight.”