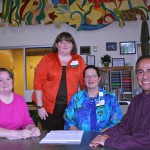 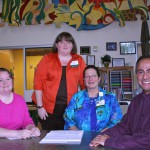 When he first learned that he would be a father, Ray Hemachandra had dreams of his child growing up to be like him. But soon after his birth, his son, Nicholas, was diagnosed with autism, and Hemachandra quickly realized that his expectations would have to shift.

“When you get a diagnosis, there’s a lot of learning to do then,” Hemachandra says. “Here you have a child who is different, and you have to learn about it fast enough, [because your child’s] life can’t be your process. You need to step up now.”

Roxann Colwell knows the challenges of raising a child with special needs firsthand. Colwell, who has a 30-year-old daughter with Down syndrome, created the Family Support Network of Western North Carolina 15 years ago as a parent-to-parent support and mentoring program for caregivers of children with special needs. The organization offers a community resource guide, hosts support groups for families and establishes support networks for parents whose children have received similar diagnoses. From July 2012 to July 2013 the Family Support Network served 901 families.

Everything, from education to finances to navigating puberty, poses additional challenges for parents of children with special needs, but Colwell says the necessary resources and services for parents are not as easily accessed or available. Furthermore, parenting a child with special needs involves a whole variety of players and services that would not otherwise be needed when raising a typically developing child. “It’s a very overwhelming and complicated system,” says Colwell, “the service system, the bureaucracy of working through financial help and resources. … In the whole journey of raising your child with special needs, you can wander out there a lot and not know where to go. The less wandering you have to do, the better.”

“When your child is first diagnosed, there are a lot of emotions on the spectrum of grief,” says Colwell. “They’re all normal, but you don’t know it at that point. We tend to think we’re the only ones this has ever happened to. That’s the irrational part of grieving.” Receiving a diagnosis can feel alienating, Colwell says, but the purpose of the Family Support Network is to reassure parents and caregivers that they are not alone. “The hope is that they would walk out of this office with information outside of the medical realm, that they would leave here with a sense that there is another community that they can choose to be a part of. … There’s nothing in the world like a parent who’s been down that same road saying, ‘I know how you feel.’”

The Family Support Network is based in and sponsored by Mission Children’s Hospital but offers Family Group Nights once a month in Buncombe, Henderson, Madison and Transylvania counties. During these meetings, family members and caregivers gather for emotional support and resource-sharing. The Family Group Nights “provide community, a sense of place,” says Hemachandra, who has been coming to the Group Nights with his son since 2007. “You’re less isolated and alienated. You see other people [raising their children with special needs], so you know you can do it.”

Grief is a normal feeling for any family who has just received a diagnosis that their child has special needs, according to Colwell. But for some, Hemachandra says, grief lingers for too long. “Some families are still crying,” he says. “Those children are being mourned over, but they’re right there. … You become a survivalist, but that’s not good enough for your child.” The Family Support Network and Family Group Nights, according to Hemachandra, allow families to “fast-track” the grieving process, helping to facilitate the transition from grief to acceptance. “You see children getting older and having value,” he says. “It’s something to celebrate.”

Leah Stroupe is a Family Support Network regular who has been involved with the program for the past seven years. Her stepson, Jacob, is 8 years old and has fetal alcohol spectrum disorder. Stroupe is a parent mentor at Family Group Nights. As a parent mentor, she greets families, facilitates the evening’s conversation and provides support to families who have received the same diagnosis as her child. “I want to help parents that are just getting the diagnosis and understanding their child who has FASD know that it’s not as bad as it seems,” Stroupe says.

In addition to Family Group Nights, the Family Support Network also offers educational resources for families, including a lending library, workshops and training. “Some people want to bury themselves in a book, and others want face time,” Colwell says. “It’s longitudinal support.”

When parents receive a diagnosis that their child has special needs, their dreams may have been interrupted, but Colwell believes that those dreams don’t need to end. “It’s not the child they expected, but they want to learn about them and grow with them,” Colwell says. “When you have a dream, you don’t immediately have another one ready to go. You need to rebuild those dreams. We want families to develop new dreams for their children with special needs.”

To learn more about the Family Support Network and its services, visit missionchildren.org.