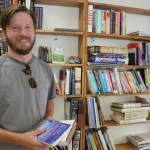 By the Book: CEO Brendan Sherar runs Biblio.com, an online marketplace specializing in rare and collectible books from independent bookstores around the world. “Even though so much of our business is, in fact, outside of North Carolina, we’re an Asheville company. The heart, the soul, the spirit and the dynamics of who we are and how do it are firmly rooted here in this community,” he says. Photo by Julia Ritchey 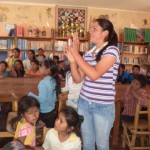 Biblioteca: A librarian gives a presentation at Biblioteca Villa Zamora in Morado K'asa, Bolivia. The library there was the first building Sherar and his nonprofit BiblioWorks helped construct. Photo courtesy of BiblioWorks

This is the last in a summer series on local tech and Internet firms based in Western North Carolina.

While wired readers load up their iPads, Kindles and Nooks with summer reading, one online marketplace is keeping the pages turning for hardcore bibliophiles. For 10 years, Asheville-based Biblio.com has connected collectors around the globe with used and rare books, growing to become, by some measures, one of the top-three online used-book sellers.

“One of the motivations for me to get into the book business, initially, was looking for some kind of noncorporate job, way to make a living, where there was a certain amount of independence,” says Biblio’s CEO Brendan Sherar.

In 2005, Brendan Sherar founded BiblioWorks, a nonprofit that builds libraries in Bolivia and promotes literacy in impoverished communities. The idea came from his sister, Megan Padilla, who was serving in Peace Corps in that country at the time.

When she asked community members what they really wanted in their town, they told her a library. Naturally, Padilla contacted her brother and asked if he’d be willing to help.

In the eight years since its inception, BiblioWorks has built 11 libraries in the South American country. Sherar and his daughter Sophia just returned from Bolivia after a two-week trip visiting some of those libraries in the towns of Morado K’asa, Tomina and Maragua.

For more information on the nonprofit’s work, go to biblioworks.org.

He started out owning an independent bookshop in Weaverville, running it with his wife for about three years in the late 1990s. But by 2000, e-commerce and Internet marketplaces were beginning to take shape, Sherar says. The couple closed the shop, as he continued to pursue the idea of distributing books online.

“We sold off the majority of the inventory, and we continued to sell books online … for a little bit,” explains Sherar. The first incarnation of Biblio was a meta-search engine, which allowed users to compare prices of books from different online markets but didn’t let them place the order directly. Sherar, with zero tech background, began developing Biblio concurrently as an online marketplace where independent bookstore owners and larger distributors could sell their stock.

Biblio takes a commission from each sale on the site, he explains, but it’s primarily focused in keeping money in the pockets of independent bookshops. Sherar adds that seeing Amazon buy out other online marketplaces in the early e-commerce days led him to want to create his own model. He says that Amazon “started making changes that were effectively not helpful to the online book community — really squeezing the booksellers.”

The present-day incarnation of Biblio officially launched in 2003. Sherar says the initial growth period was fast-paced. “There was a lot of room out there on the horizon, I guess, available for the picking. That was also during a pretty heady growth period for the Internet and e-commerce in particular,” he says.

Since then, the company has grown to include a catalogue of 85 million books from 5,000 booksellers worldwide. Biblio employs 11 people, who all work at the company’s headquarters on South Lexington Avenue in downtown Asheville. Although their sales are nowhere near book behemoth Amazon, Biblio has carved a niche market in rare, collectible and out-of-print books. Chief Operating Officer Allen Singleton says this specialization has given them an edge.

“We’re competing with the likes of Amazon, [which] outpaces us in sales by several orders of magnitude. But we’ve got a strong position in the hearts and minds of booksellers, because our business practices aren’t competing with them; we’re trying to get them in contact with customers,” says Singleton.

Sherar reports that the company grosses about $8 million in sales annually, with most of those profits going back into the pockets of the bookstores. Although experiencing steady growth for the majority of the decade, even during the Great Recession, Biblio stumbled in 2010 after making some changes to its site.

“We made a lot of changes at once,” explains Singleton. “We did an overall redesign of the site, did a refactoring of the search architecture, changed the URL structure. … We changed three or four very core things about the site, then we saw a drop-off from the search engines, not immediately, but a pretty steady drop-off from there.”

Like most Internet companies, Biblio relies on steady traffic from Google, whose highly secretive search algorithms make it hard to gauge what making a change might do to a company’s search rankings. “It is kind of a conundrum with Google. … In some ways that stifles innovation. You’re kind of afraid to make a big radical change because you don’t know how that will affect your business. Our approach with Google these days is benign neglect,” says Sherar.

Talking about the future of the company, Sherar is happy to forego the e-book craze and stick to selling bound hardcopies. Although he’s considered adding them, the majority of Biblio’s customers are seeking tangible and unique tomes.

“That’s a game we can’t win against a company like Amazon,” says Sherar. “As far as we’re concerned, they have unlimited resources. … I don’t see in e-books, which are just pure commodity, that there’s any way to be competitive. We have to be way more niche than that and focus on something that doesn’t lend itself to broader commercialization and commoditization.”

Of course, Sherar prefers the real deal, too, as evidenced by Biblio’s business cards, which double as retro-looking bookmarks. He also has a personal collection of books — nearly 5,000 — that he’s had a hard time parting with since closing the bookshop more than a decade ago.

Sherar says he loves hearing stories from customers who have found a book on Biblio that they’d spent ages trying to find.

“We get a constant flood of these stories about people who’ve been searching for this book since childhood and they’ve been so excited to find it,” he says. “That’s kind of cool for us to know that what we’re able to provide can touch people’s lives in a meaningful way.”

View all posts by Julia Ritchey →

One thought on “A cover story: Biblio”