Appalachian Mountain Brewery, French Broad Brewery, Highland Brewing, Innovation Brewing, New Belgium Brewing and Sierra Nevada Brewing were all recognized for having chosen to invest in solar power for their companies’ energy needs. Thomas Kimbis, vice president of the Solar Energy Industries Association was there to present the award to the Asheville Brewers Alliance members.

Kimbis noted that the demand for solar energy in North Carolina has been growing exponentially, and the state was No. 2 in the market in 2014, after California. “That’s an incredible jump in the market here,” says Kimbis. “We only give out a couple of these awards a year, and what we’re looking for is champions. We’re looking for those that have taken some part of the market and made it grow in a way that we didn’t expect.”

Kendra Penland, the new executive director of the Asheville Brewers Alliance, acknowledged the synergy between the two industries. “Craft brewing, especially here in Asheville and in Western North Carolina, just goes hand in hand with outdoor recreation and conservation. Water quality is a key factor for a brewery of any size, and it matters where you get your energy from.” By making the switch to solar, she added, these breweries have not only demonstrated leadership in their industry, but have also had a direct environmental impact on their communities.

To highlight a facet of this industry growth, Highland Brewing Co. President Leah Wong opened the meeting with some details regarding Highland’s decision to go solar and its determination to invest in sustainability. “My father, Oscar Wong, has built an organization where thinking sustainably is a part of our culture,” she said.

Highland Brewing is on the verge of finalizing a multifaceted, multimillion dollar expansion of its facility. The massive up-fit project, which began in 2012, will be realized in spring of 2016 with the opening of a new rooftop bar and event venue. A new state-of-the-art bottling line, which is twice as efficient as the company’s previous line, is already in production.

A solar collector array on the roof, which was completed last year, currently provides for all of the facility’s energy demands during peak times on sunny days and is saving the company about $3,500 per month in energy costs. “Solar and efficiency, in many ways, has been a part of our process,” said Wong in her closing comments to the group. “We took an unsightly and potentially unusable space, and it’s now an attraction and a production space for our company.”

“Solar energy is not a liberal idea or a conservative idea; it’s an idea that works,” stated McHenry. “We will have good news when it comes to solar energy coming out of the House of Representatives and the United States Senate this week, as the president is signing an important piece of legislation that expands tax credits for solar energy. This will make solar more widely available, and it means you can start the tax credit the moment you start laying out serious capital, not having to wait until you have got production. I’m honored to be here today to thank you and to enjoy the good cheer that happens here in Asheville.”

Kibbis presented the Solar Champion Award to Anne-Fitten Glenn, ABA board of directors member, and the attending members of ABA to loud applause. The trophy will rotate among the six breweries, staying at each for a few months so all winners can have the honor of displaying it in their taprooms. 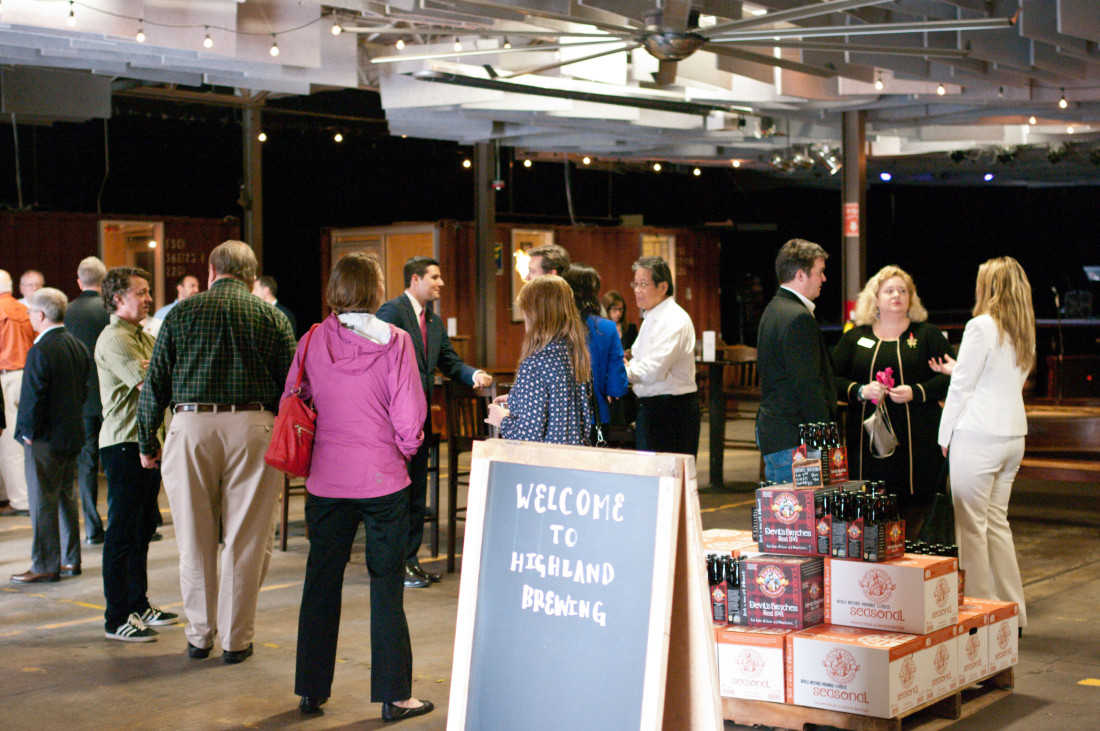 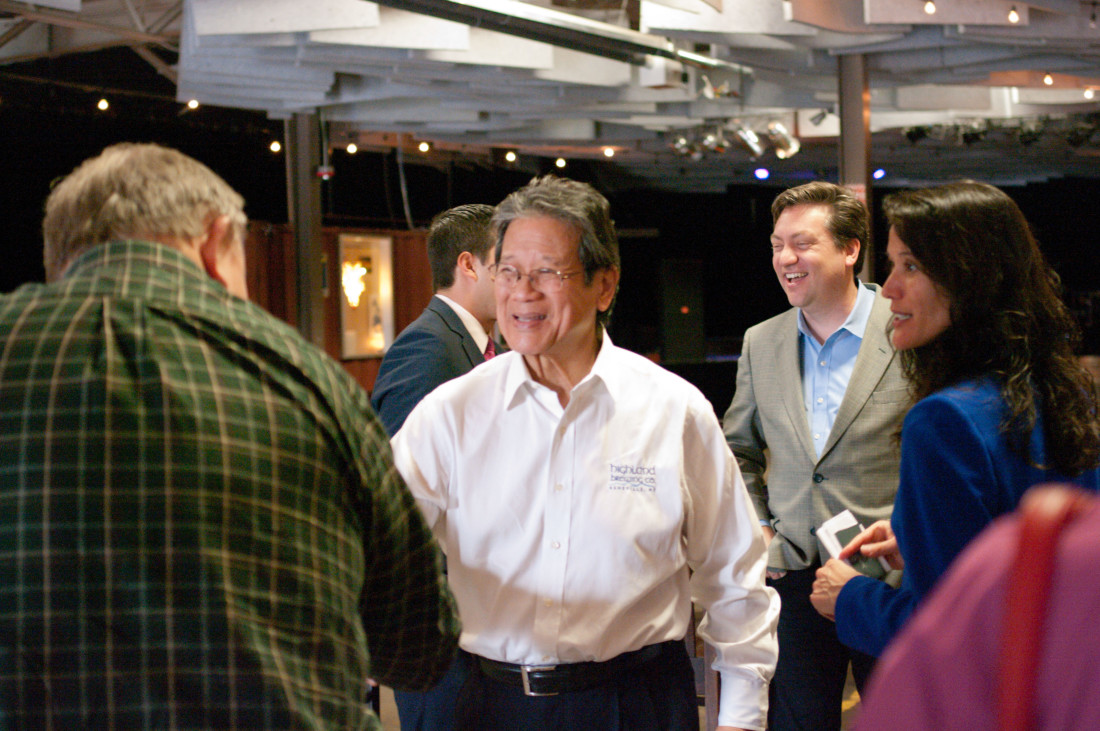 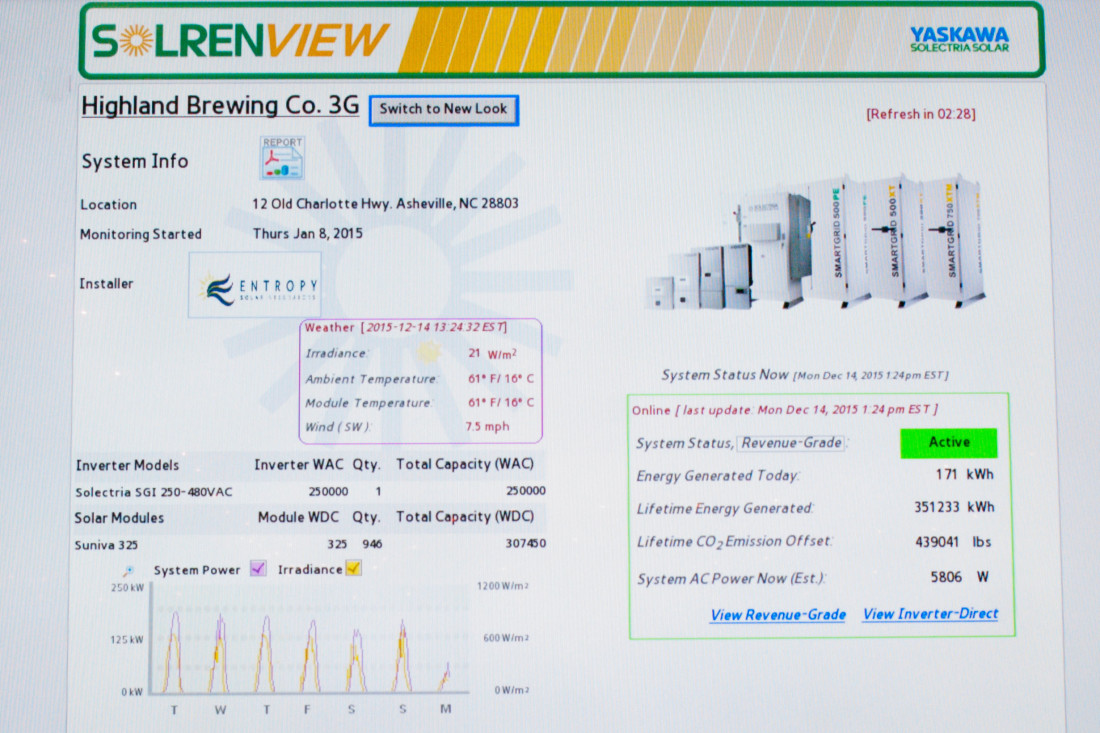 Real-time read out of solar energy production at Highland Brewing displayed on a monitor in the taproom during the event. 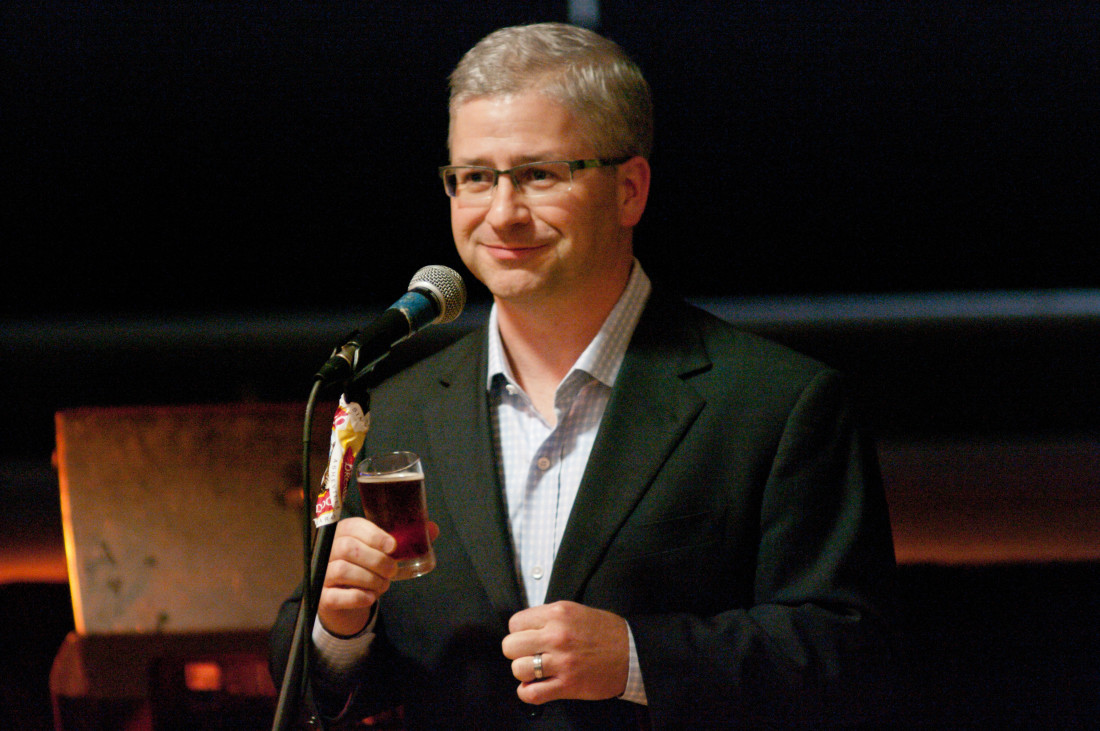 Rep. Patrick McHenry congratulates the ABA on the award and thanks the group for its leadership. 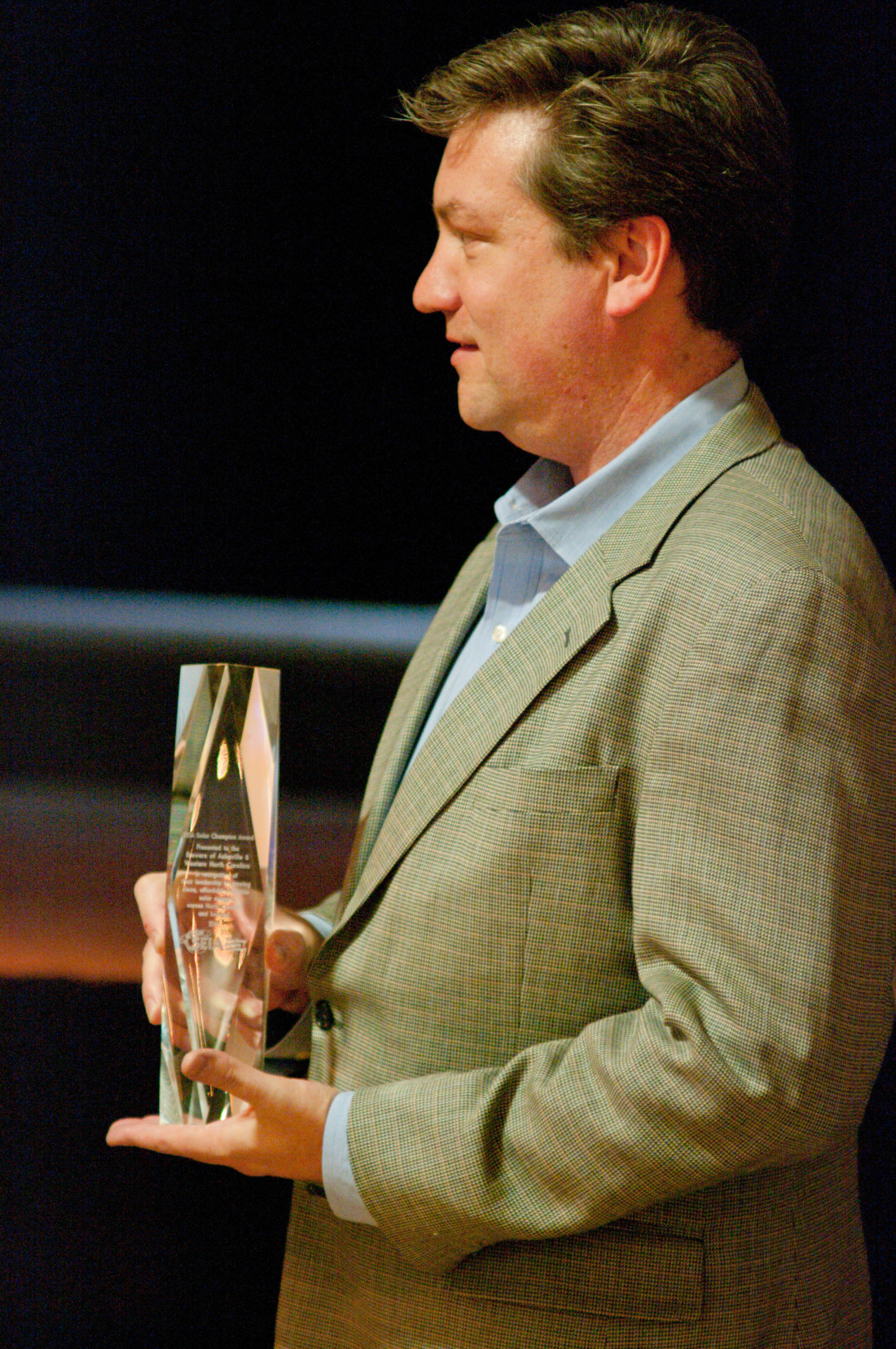 Thomas Kibbis of the SEIA with the Solar Champions Award. 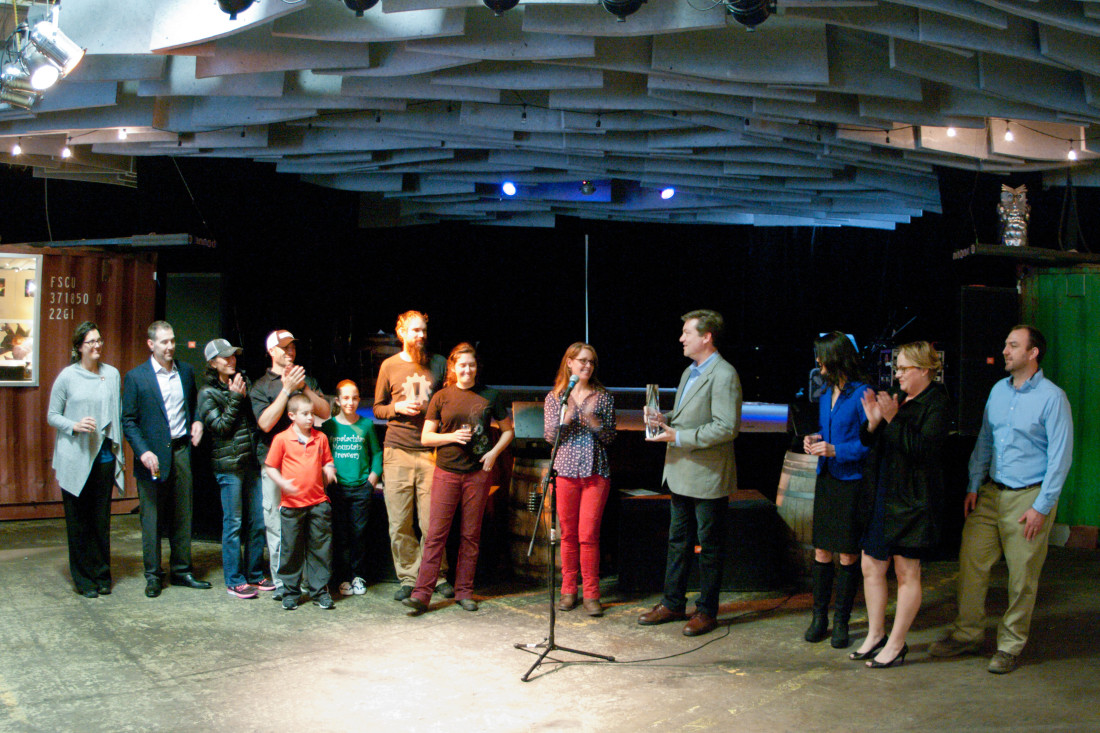 Anne-Fitten Glenn and members of the ABA accept the SEIA Solar Champion Award. 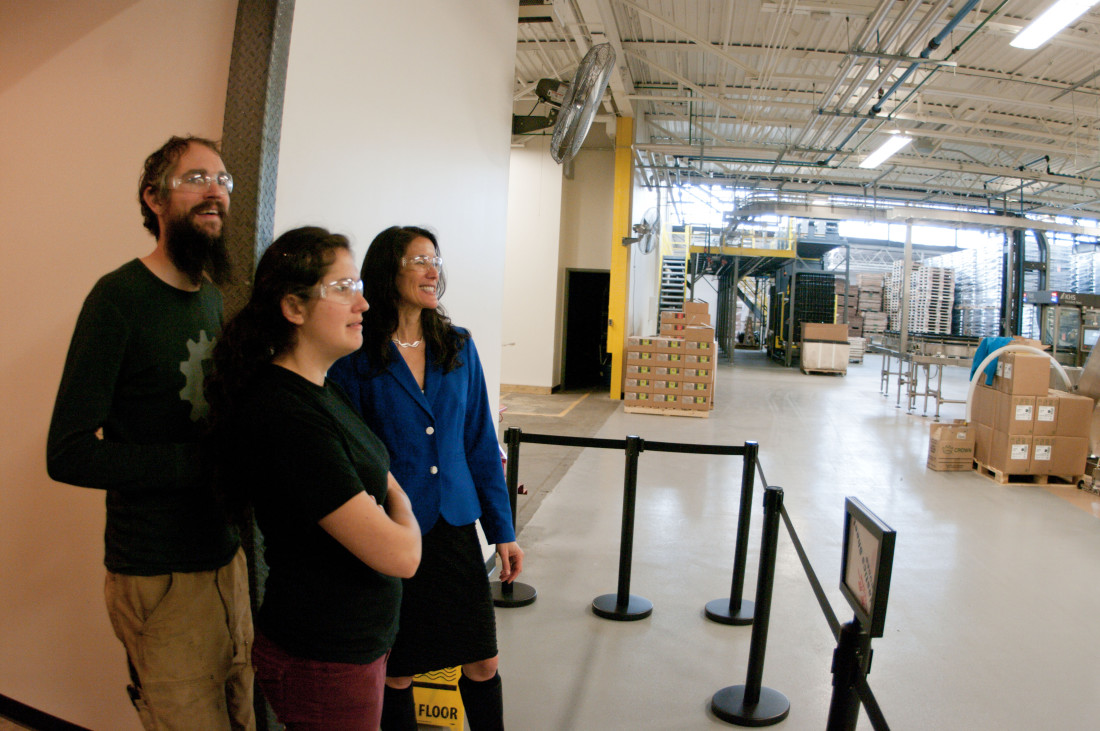 Leah Wong (right) leads a tour of the new bottling facility at Highland and chats with Chip Owen and Nicole Dexter of Innovation Brewing (left). 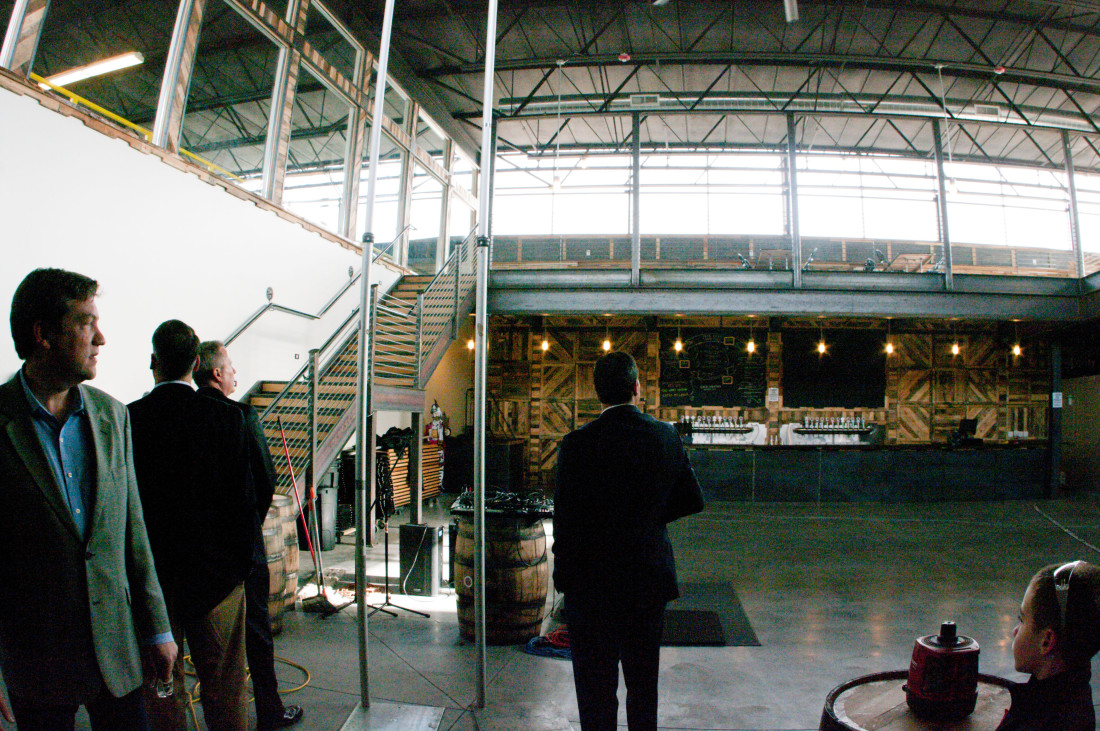 Sneak peek of the mezzanine and event venue Highlands will be opening in Spring 2016. 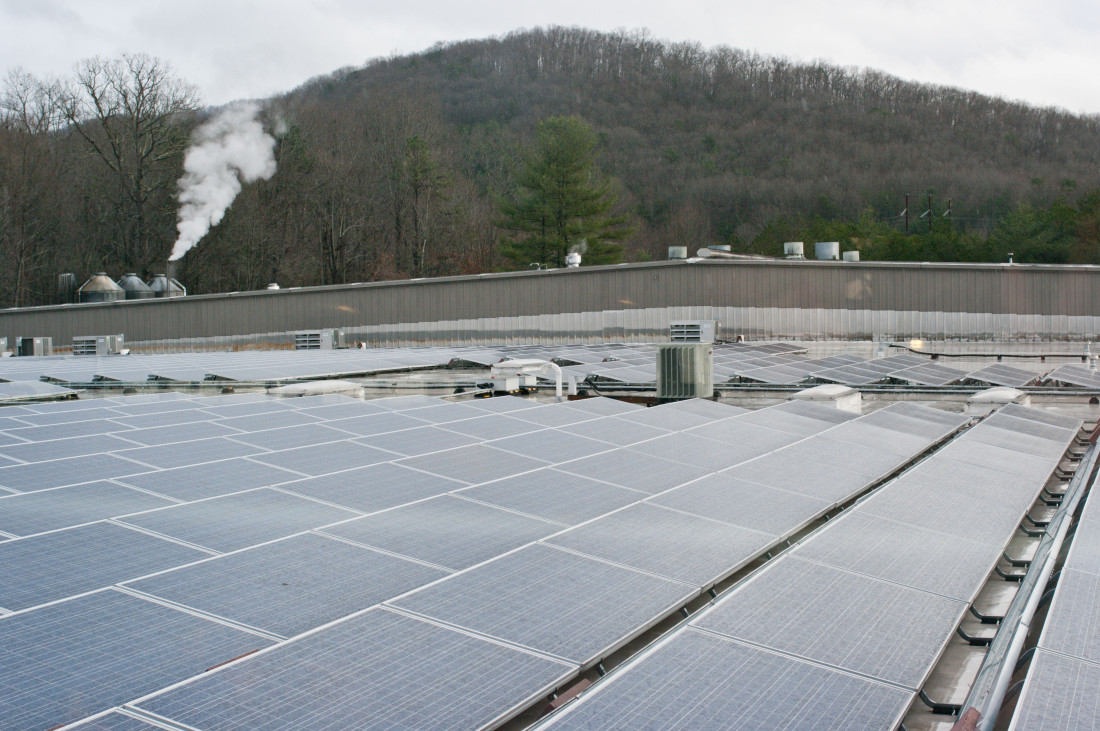 AIMING FOR THE SUN: A new array of solar collectors on the roof of the production facility at Highland Brewing Co. provides for all of the facility’s energy demands during peak times on sunny days and saves the company about $3,500 per month in energy costs. Highland was one of six local breweries recognized Monday with the Solar Champion Award for its leadership in implementing solar energy.