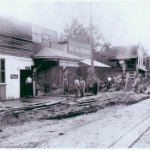 Workers move the streetcar track to the center of Haywood Road in 1914. photos courtesy of the North Carolina Collection, Pack Memorial Library, Asheville 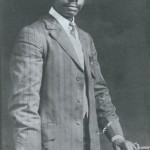 West Asheville has maintained an identity so distinctive that visitors frequently ask if it’s really part of Asheville. That’s not surprising, considering the area’s history (see timeline, “Notable Moments”). It actually was a separate town during two brief periods in the late 19th and early 20th centuries. And when West Asheville voted on consolidation with Asheville in 1917, residents were evenly divided: Merger supporters carried the day by a mere eight votes, the Asheville Citizen reported on June 10. In an editorial that same day, the newspaper’s editors emphasized growth, noting that West Asheville’s 6,000 residents brought Asheville’s population to 30,000.

More attention was given to the voting method, however: It was the first election in Western North Carolina to use a secret ballot.

Although West Asheville wasn’t defined as a place until the Post Office gave it that name in the late 1880s, human beings have lived in and around the area for about 10,000 years. The earliest known inhabitants were various American Indian cultures; the cherokee came later.

It wasn’t until the late 18th century that outsiders began having a significant impact. William Moore and his slaves built a fort near Hominy Creek in 1777. And the 1827 discovery of sulphur springs marked the beginning of Asheville’s reign as a tourist destination.

The pace of development stepped up considerably in 1885, when Edwin G. Carrier stopped off on his way to Florida from his home in Michigan. Buying 1,200 acres of land, he developed Haywood Road, built the Carrier Springs Hotel and constructed a racetrack along the French Broad to entertain guests.

Carrier’s West Asheville and Sulphur Springs Electric Railway began operation in 1891, crossing the river on Carrier’s Bridge along Amboy Road. Various trolleys ran along Haywood Road (which was built to accommodate them, the existing road being too steep a climb up from the river) until 1934. During that span, West Asheville developed as a community rather than simply being noted for its sulphur springs.

Nonetheless, in 1897, the town’s incorporation was repealed, for reasons that remain unclear. On March 13, 1913, however, West Asheville was re-incorporated.

By 1915, West Asheville’s 4,000 residents were served by 10 stores, a mission, a volunteer fire department, a bank and an asphalt boulevard 60 feet wide and more than a mile long. Faced with growing municipal debt and increasing pressure for expansion and various improvements, however, the mayors of both Asheville and West Asheville urged annexation.

Many years later, former Asheville Police Chief Charles W. Dermid, who grew up in West Asheville, told Citizen-Times reporter Henry Robinson that many improvements were in fact made, including paving streets and installing sidewalks. Following consolidation, West Asheville shared in the city’s boom period, which lasted until the Great Depression.

In the latter half of the 20th century, the emergence of Patton Avenue as the principal traffic corridor drew attention (and business) away from Haywood Road. But in the 1990s, younger people began moving into the neighborhoods off Haywood, taking advantage of lower home prices. They also started opening small businesses along what had traditionally been West Asheville’s main thoroughfare, sowing the seeds for today’s bustling community.

“West Asheville has had its boom cycles, then it has had times when it was not as successful,” notes librarian Karen Loughmiller, coordinator of the West Asheville History Project. “The older neighborhoods in West Asheville are still intact. We have developed a nice mix of younger folks and older folks; it’s a very walkable area.”

Asheville’s new Haywood Road Vision Plan, approved by City Council Feb. 25, points out that “In some ways the Patton Avenue ‘bypass’ construction saved Haywood Road from additional widening projects that were so common on many roads around Asheville and allowed the community to maintain its historic walkable character. Merrimon Avenue provides a good contrast to Haywood Road, since it is a local roadway that has been widened over time to four lanes. The resulting larger scale and faster driving speeds along Merrimon have made it difficult to redesign and return it to the pedestrian-friendly format so valued on Haywood Road.

“Because Haywood Road has retained more of its original scale, it has developed strong community support for strengthening its pedestrian-oriented, mixed-use character. It is along this historic roadway that the community now thrives.”

— Grady Cooper can be reached at gcooper@mountainx.com.

View all posts by Grady Cooper →

2 thoughts on “A shifting identity: West Asheville’s storied past”