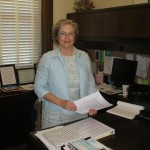 “Being second-guessed on what is good for this town by one or two people — our elected legislators here, and the others in Raleigh who don’t live here — is very frustrating.” — Barbara Volk, mayor of Hendersonville photos by Nelda Holder 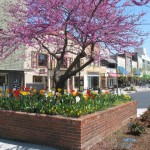 Updated charm: Hendersonville is just completing a three-year upgrade to Main Street, including structural repairs, more trees and landscaping, and the addition of street furniture.

The mayor of Hendersonville, just 29 miles down Interstate 26 from any-way-you-like-it Asheville, describes her city as a “sophisticated small town,” enjoying itself and its more leisurely pace while sharing a lot of the same regional amenities. And right now Barbara Volk is keenly aware that her town, population 13,277, is also sharing some of the same headaches that Asheville (population 84,458) is staring down: state legislation that proposes multiple cuts in funding sources and changes the structure of local control.

In 1989, Volk, a Democrat, was the first woman elected to the Hendersonville City Council in its 147-year history. She spent two decades on that job before winning election in 2009 as the town’s first female mayor. That means she’s witnessed a lot from an administrative perspective in the region, including much of what has led to the current Asheville water imbroglio. Volk discussed these topics recently in her tidy third-floor office of Hendersonville City Hall

What’s a municipality to do?

Volk is following municipal legislation in the 2013 North Carolina General Assembly “very closely,” she says, particularly since she serves on the N.C. League of Municipalities’ tax and finance legislative action committee. She gets regular emails about tax and finance, annexation, extraterritorial jurisdiction and other municipal bills that she characterizes as “really coming down hard on cities — restricting what we have been able to do for years.”

That’s particularly true financially. Legislation that would take away the rights of cities to issue privilege licenses or collect a share of franchise and excise taxes could strangle revenue and increase property taxes. Hendersonville, Volk says, stands to lose $1.2 million from such manipulation.

“We’re getting cut back and back and back,” says the mayor. “I feel very frustrated that we’re being told how we have to run our city. Even things like … architectural rules. We’re trying to keep the city looking good and that’s just one more thing that we’re not going to be able have any control over.” (The pending legislation does exempt historic districts; Hendersonville has seven.)

Philosophically, Volk argues, “We are the closest to the people. My home number is in the telephone directory. I answer my own phone here at City Hall. If people are concerned, they can come directly to those of us on City Council. Being second-guessed on what is good for this town by one or two people — our elected legislators here, and the others in Raleigh who don’t live here — is very frustrating.”

Municipalities are doing their best to let legislators know how they are being affected, Volk says, and she has found her particular legislators at least open to listening. “They may not agree with us, but I still think we have a good relationship with them. And occasionally they do respond to us too.”

Asked about regional communication between mayors and commission chairs, Volk says most of her discussions take place at Henderson County’s Local Government Committee on Cooperative Action (two representatives from the county and two from each municipality), or at Land-of-Sky Regional Council, a governmental planning organization that serves Buncombe, Henderson, Madison and Transylvania counties. “I have not sat down with the mayor of Asheville or other mayors outside of our own county, other than what we’ve discussed at Land-of-Sky,” Volk acknowledges.

While municipal decisions are playing out in Raleigh, Volk is also busy with the business affairs of a city just minutes from Asheville, but seemingly in another world.

“Yeah,” she says, laughing as she hears that description. “People here say that too.”

So how would she describe Hendersonville’s personality as a city?

“We’re really a very sophisticated small town, but we are still a small town. And that’s how people see us.” People love Main Street for that reason — it offers that small-town feeling, but with city-style amenities such as “great restaurants” and the Flat Rock Playhouse’s downtown venue, Volk says. Meanwhile, “the outdoorsy stuff obviously is not far away.”

The community itself is “very philanthropic,” with many more nonprofits than the average small town, Volk continues. “So we have a lot to offer. But we’re just a little bit calmer than Asheville. We have our festivals, but … folks here just say, ‘I do go up to Asheville, but it’s always nice to come home where it’s nice and quiet.’”

Staying out of the fray

That small-town oasis is set in a region that can generate its own problems without the state Legislature, although one of the stickiest has now taken on a new legislative identity in House Bill 488, sponsored by Henderson County Rep. Chuck McGrady and Buncombe County Reps. Tim Moffitt and Nathan Ramsey, Republicans. Harkening back to a long history of water issues in the region and a failed attempt at a regional water authority (1995-2002), the state bill commands the transfer of the Asheville water system to the Metropolitan Sewerage District of Buncombe County, creating a new water and sewerage district. Henderson County is slated for representation on the new board because of a small portion of the county utilizing MSD services. (HB 488 currently awaits House action on amended text approved in the Senate, before going to the governor for his anticipated signature.)

Hendersonville has managed to stay on the sidelines of the controversy because it maintains independent water and sewer systems tailored to the town’s specific geographical location and governing procedures, Volk explains. “Our policy for many years — and we see no reason to change it — is if a developer comes in and requests a water extension, it first has to be approved by the jurisdiction that it’s in [municipality or county],” she says. “We don’t want to be the ones determining where water and, consequently, growth are going to go. That’s just being a good neighbor.”

The town has plenty of water capacity, and has even been permitted to add to the plant if necessary. “But we don’t see a need for that,” Volk says. Hendersonville does maintain an interconnection with the city of Asheville that allows the two cities to run water in either direction if needed — something Hendersonville used while upgrading its plant. “If they need water, we can turn the pipe in one direction; and if we need water, we can turn the pipe in the other direction,” she explains.

As for sewerage, Hendersonville’s policy basically requires any territory asking for service to ask to be annexed into the city at the same time “For the most part, if you’re on sewer, you’re in the city limits,” explains Volk. There are lines outside the borders to some industries and to Flat Rock. “But we pretty much just handle what’s upstream from our wastewater treatment plant,” Volk says. “We’re not looking to expand … but there’s plenty of room for growth.”

Their self-containment was one of the reasons, the mayor explains, that their legislators have not tied them to the Asheville/Buncombe/Henderson entanglement over water and sewerage. “We’re just so far removed from everything that’s being discussed up there that there just didn’t seem to be any reason to do that.”

“Just standing back,” she says of the latest water-sewerage controversy, “I wish it hadn’t come to the point of the Legislature having to come in. I wish there had been some way that the various entities involved could have settled all the lingering issues.”

Why haven’t those issues ever been resolved?

“It’s kind of like the Middle East, you know — ‘Back in 1352.’ There’s just been so much baggage over the years. Asheville is very different from Henderson County, even more so than it is from Hendersonville. Different focus. Different interests. You would think with new personalities and new people involved it would change, but folks have long memories,” Volk says.

And it’s difficult, too, to think as a region, she muses. “We’re concerned for our local communities and it is hard to spread that out, even trying to spread our [city] vision out to Henderson County. We’re so concentrated on what we have to do that worrying about what the situation is in Madison County is just beyond us.”

Volk’s attention to politics is rooted, she explains, in one of her earliest experiences. When she and her then-newly graduated pediatrician husband Jim moved to Hendersonville for his first job in 1975, a neighbor told her if she was going to live there, she needed to know what was going on in town. Volk has heeded that advice ever since.

But the mayor takes time to enjoy the benefits as well. “One night my husband and I were eating at one of the restaurants that’s right near where the city has tables, [a new Main Street feature], and people were having a birthday party [at the tables]. They had a cake and were singing ‘Happy Birthday.’” It was confirmation, she indicated, of the spirit she enjoys in her city and the pride she takes in those recent Main Street renovations. “We want people to use it. Just come on down.”

— Nelda Holder can be reached at nfholder@gmail.com. Follow our Statehouse news at mountainx.com/ncmatters.