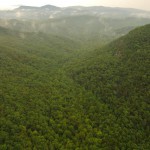 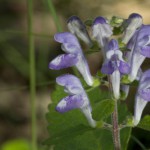 Pretty in purple: Box Creek Wilderness is home to some 88 rare species, including the Appalachian skullcap, a native wildflower that’s classified as endangered in North Carolina. 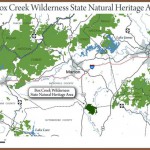 Every so often, wilderness gets a break. Consider the case of the Box Creek Wilderness, a 3,300-acre forest tract straddling the Rutherford/McDowell county line just east of Asheville.

Once slated to become a high-end residential development, the property was acquired late last year by a conservation-minded owner after the developer went bust. Local conservationists watched with bated breath as Tim Sweeney, the founder and CEO of Epic Games, took title to the parcel.

And on June 7, North Carolina's secretary of environment and natural resources signed an agreement with Sweeney allowing the property to be registered with the state’s Natural Heritage Program. Housed within the N.C. Department of Environment and Natural Resources, the agency administers a registry of significant natural areas.

Registering them can be the first step toward becoming a permanent nature reserve recognized by the state and future owners of the property. But there are no guarantees, and owners are free to remove their property from the list with 30 days’ notice.

The program has signed more than 300 registry agreements with corporations, conservation groups, and state and local governments. To date, however, it has inked just 30 voluntary agreements with private landowners in North Carolina. Still, the addition of the Box Creek Wilderness more than triples the private-landowner acreage in the registry in a single move, notes Natural Heritage Program staffer Scott Pohlman.

Local environmentalists say the new registry agreement enables the Box Creek Wilderness to continue its de facto role as a natural haven for a unique assemblage of rare species and communities that have found a home there since before the last ice age. The tract hosts some 88 rare species of plants and animals as well as at least 20 rare natural communities, according to a new census conducted by biologists with the Marshall-based Mountains-to-Sea Ecological.

There are also several archaeological sites on the property — some used by Native Americans, others by settlers of European descent — that have yet to be fully explored.

Meanwhile, new threats — including invasive species and ATV users — loom for this wild area, even as it’s added to the registry.

"This tract is a critical steppingstone in a wildlife corridor connecting the extensive state park and game lands in the South Mountains to the protected lands along the Blue Ridge," explains Susie Hamrick Jones, director of the Foothills Conservancy of North Carolina in Morganton.

"We've been trying to find a conservation solution for this tract for a long time," notes Jones. And with climate change driving plants and animals to seek pathways to new areas meeting their basic ecological needs, that goal becomes even more pressing, since the Box Creek Wilderness provides "quick-and-ready routes" to appropriate habitat.

"Private landowners are the front line of conservation now, because funds for public acquisition of land are at an all-time low in North Carolina," Jones reports. Public moneys such as the Clean Water Management Trust Fund — which supported an extraordinary period of land and water conservation in this state over the last 20 years — are nearly depleted. The ongoing economic slump and the current state Legislature’s priorities have created this situation, she says. Meanwhile, with land values at a historic low, opportunities to conserve significant tracts are abundant.

"This is a great time to continue North Carolina's leadership in investing in this state's special places and valuable waters," Jones declares. "These places drive our tourist industry and our agricultural industry. We're looking to the current leadership in the General Assembly to increase the funding for these trust funds as the economy improves."

The Box Creek Wilderness was formerly the Dysartsville Game Land, one of a number of large properties owned by regional timber companies. Leased to the state as public game lands, these areas were open for hiking and hunting by anyone holding a state-issued hunting license. For generations, such arrangements kept a lot of Western North Carolina acreage forested while enabling local folks to make low-impact use of these lands. In 2007, however, The ForestLand Group sold the property to a Charlotte-based developer who subsequently went broke, enabling Sweeney to aquire it in 2011.

Stewardship activities unfolding in Box Creek nowadays are geared toward preserving its natural communities — and many rare species — for the long term. A team of specialists from the Durham-based Unique Places has taken on a series of restoration projects on the property, including treating hemlock stands against the woolly adelgid, the imported pest that’s killed great numbers of these majestic trees across Western North Carolina.

The team has also planted blight-resistant chestnut trees from The American Chestnut Foundation in a bid to re-establish the once-dominant hardwood species here. In addition, a recently launched burning program seeks to restore fire-dependent natural communities, including the many rare plants associated with rock outcrops on the property's higher elevations along Rockey Face Mountain.

But perhaps most unusual: There are plans to remove and restore the few roads present on the tract. ATV users have worn tracks in places, and old logging roads have left their mark. It's like reverse engineering for conservation purposes, and it's generally undertaken only by the most seriously conservation-minded owners. "Nothing on this scale has ever been done in North Carolina by a private individual," Jones reports.

Stressing that the current owner prefers to keep a low profile, Jeff Fisher of Unique Places adds, "He's doing what we wish the state would do with their best conservation lands: He's doing what's in his heart."

But you don’t have to own a large parcel to follow Sweeney’s lead, Fisher asserts. "Good land management is something anyone with land can do. From deciding to only plant natives, to how you control water runoff on your property, to creating wildlife habitat — heck, there are things you can do with a lawnmower," he says with a chuckle. "You can decide whether you like privet — which our team is spending a lot of effort to remove from this natural area — or you can decide to avoid landscaping with invasive species” that escape and proliferate in natural areas across the Southeast.

Linda Pearsall, who directs the state agency’s Office of Conservation, Planning and Community Affairs, agrees. "It's always significant when a landowner makes this kind of conservation commitment," says Pearsall, whose office oversees the state's registry. "It demonstrates a real appreciation for North Carolina's natural beauty, its wildlife and significant places. It makes it part of the public conversation that doing conservation is valued."

— Contributing reporter Susan Andrew can be reached at sandrew@mountainx.com.