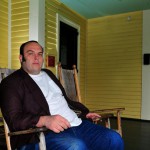 On the arson trail: WNC native James MacKenzie wants to find out who torched the Thomas Wolfe home in 1998. The early-20th-century author wrote “about a South we like to forget.” (photos by Bill Rhodes) 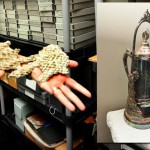 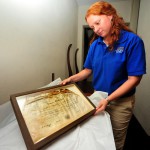 At your (melted) service: The original Thomas Wolfe tea-service melted into a silver blob; an anonymous donor provided a period piece similar to the one lost.

Asheville resident James MacKenzie is a man with a mission.

The 34-year-old Spruce Pine native has long been a big fan of author Thomas Wolfe, history and mysteries — so the unsolved 1998 arson at the Thomas Wolfe Memorial in Asheville seems a natural obsession for him.

A discussion with friends concerning unsolved local mysteries has sparked a year’s worth of detective work and assorted public-relations efforts aimed at eliciting new leads in the case or perhaps even getting a confession. Xpress caught up with MacKenzie recently; here are excerpts from that conversation.

“You want literary inspiration?” asks Christian Edwards, site manager for the Thomas Wolfe Memorial in downtown Asheville. “Technology of the early 20th century? Asheville's rise as a destination? We have all that and more,” she says of Wolfe’s childhood home on Spruce Street.

Restored after a devastating, still-unsolved arson fire during Bele Chere weekend 1998, the home contains more than 3,000 original artifacts from Wolfe’s life and times, about 85 percent of them original. The rest are replacements from period pieces: The home’s original silver tea service (a first-anniversary present from Wolfe's father to his mother) melted into a puddle in the fire; a replacement was donated during the reconstruction.

“Touring the memorial is important, because we are accessible on so many levels,” adds Edwards. “Very few historic house museums maintain anywhere near the number of original artifacts that we do.”

Mountain Xpress: Why the interest in a 14-year-old fire?
James MacKenzie: USA Today named Asheville a literary destination; we have to protect our literary heritage to keep that distinction. Burning an author’s home is a terrible affront, right up there with burning his books. Thomas Wolfe is probably one of the reasons Asheville’s on the map: During the 1920s and ’30s he was our most famous resident, even though many residents shunned him after his first book [Look Homeward, Angel, 1929] came out.

There were a few other things going on the year the house burned.
The summer of 1998 was a really interesting time. It was the height of the intrigue with then President Clinton and Monica Lewinsky. All the papers sported headlines like "Clinton in Crisis" and "Blue Dress Blues," while down at the bottom of the page, below the fold, was the Wolfe house arson. It was also the beginning of the Y2K fear-leading, and while of course we now know nothing happened, many of the articles on this looming disaster read like reality to people at the time. Planes falling out of the sky; banks unable to confirm accounts; stock market meltdown. Regionally, bomber/fugitive Eric Rudolph ran free while packs of federal agents conducted a massive manhunt for him all over the mountains. And of course, the arson happened the night before Bele Chere. So there were a lot of things pulling people's attention.

What draws you to Wolfe’s work?
He writes about a time period in the South that we don't talk a lot about — a South we like to forget. There are a lot of Southern stereotypes in his characters, obviously elementary-school dropouts. Wolfe was true to a fault on the racism of the time. Not what we think of as racism now: It was between Jews and Italians, Germans and Poles, Irish and Russians. You lived in your own little community: These were the people you worked with, lived around, bought things from, and certainly courted and married. Many find that disturbing now.

What do you find interesting about the historical Asheville?
In Wolfe's time, the River District was Asheville's thriving front door. The cotton mill was in full swing: It was where the jobs were in Asheville. The train station was a wonderful place, filled with strangers and goods, ideas and businessmen arriving from all points. Wolfe's first job, at age 10 to 12, was to handbill the arriving passengers for his mother's boarding house. The Old Kentucky Home had $1-a-day rates with two meals included. Many of the people he later wrote about were visitors staying at the house, everything from street preachers to circus performers, businessmen and even sex workers (although that was, of course, kept quiet at that time).

What do you think about the state of the Thomas Wolfe house now?
Restoring the house was quite a chore. Irreplaceable pieces were lost; other things could be repaired or replaced with period items. UNC and Harvard can send new diplomas to replace the burned ones, but they never passed through the hand of Thomas Wolfe; we lose that connection. In spite of the losses, if you walked into the house today and no one pointed out the fire damage, you might not even suspect it ever happened. That’s how good a job the state did. But there are places you can still see damage: smoke stains in old mirrors, tiles which don't quite match; small things. The state spent $2.4 million restoring the home; that money could have been used for other things. The arsonist took that money from me, from you, from us and has never even been identified.

What challenges does the house face for the future?
The home is having a lot of issues right now, partly due to state budget cuts, and frankly, Wolfe's star is fading a bit now. In his time, when you mentioned Hemingway or Fitzgerald, the next name would have been Wolfe. For some reason, those other writers’ fame continues, and Wolfe's has dimmed a bit. He died young, his work unfinished. His books haven’t translated well into screenplays. He wrote long: On edits, he added material. Hemingway and even Fitzgerald would be happy with Twitter; Wolfe not so much. A lot of things are aligned against the Thomas Wolfe home and his memory right now. If all I do is remind people that the home is there, get some readers back into Wolfe's work and interested in his home, well, that can't hurt.

If you have information about the Thomas Wolfe or other local arson cases, please call Crime Stoppers at 255—5050.