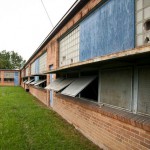 Up from the ashes: Once slated for destruction, the Reid Center is now the site of an ambitious renovation project overseen by the Asheville Housing Authority and involving an array of nonprofits. photos by Max Cooper 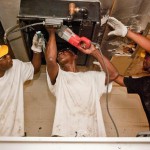 Going to work: Southside residents Antonio Swinton, Ernest Robbs Sr. and Markell Bryson are part of the demolition crew. A combination of training and contract requirements will ensure that locals are employed throughout the renovation project.

The current $4.3 million Reid Center renovation is the fruit of an ambitious alliance of local nonprofits and agencies. Once earmarked for demolition, the historic structure has played a major role in Asheville’s historically African-American Southside neighborhood since the 1920s, serving as a school for decades before becoming a community center.

Now, however, Asheville Green Opportunities, which provides job training for at-risk populations, believes it’s found a way to cut through this particular Gordian knot. Working with the U.S. Department of Housing and Urban Development, the Asheville Housing Authority, the Southside Community Advisory Board and the contractors actually doing the work, the nonprofit trains locals in the necessary construction skills and then requires the contractors to hire some of them.

“We're trying to tie community engagement, training and employment pieces all together,” Asheville GO co-founder Dan Leroy explains. “When we say to a contractor, 'You need to hire local people,' now they can't say, 'Oh, there's no one here who's qualified to do the work' — because we just trained them.”

Although the two-year renovation is still in its early stages, the idea seems to be working so far. Contractor D.H. Griffin, for example, hired eight Asheville GO trainees to remove asbestos. And when that work was completed, the company offered five of them permanent positions.

“Especially with something like asbestos removal, they were having to bring people in from Charlotte and put them up here, so it was actually very attractive to them to hire locally and not have to take on those additional expenses,” he reveals, adding, “It ultimately saved them money.”

Asheville GO aims to train 210 people, get technical certifications for 156 of them and find work for 100 on the Reid Center rehab — 55 of them unemployed Southside residents. (The remaining 45 would be GO trainees from other at-risk populations.) The renovated structure will also be energy-efficient, with an eye toward potential LEED certification.

Demolition worker Ernest Robbs Jr. says the project’s been a boon for the community.

“When I went out looking for a job, I got a door slammed in my face: It was just 'No, no, no,'” he recalls. “GO put me in a position to get work. A lot of people from the community need that. That's why things are so messed up here now: People are basically starving. There's no jobs, no help for them.”

GO's model, notes Robbs, is particularly beneficial to people who want to turn over a new leaf but can’t find a stable job because they have a criminal record. “A lot of guys from this community have baggage like that,” he says, “and GO is the only program willing to help them. It gives us a way to even the odds: I may have something on my background, but I've got this training, this certification, these references.”

Initially, there were concerns, admits LittleJohn. “We were worried contractors were going to balk at the requirement to hire local people. But we're finding that's not the case; it's just not a problem.”

Priscilla Ndiaye, who chairs the Southside Community Advisory Board, believes the program’s impact will extend beyond this specific project. “It's temporary, but you're equipping them to go out and be employed in permanent positions,” she points out.

And indeed, Asheville GO is already talking to potential employers ranging from Mountain Housing Opportunities to New Belgium Brewing about applying the same training/hiring model to other projects, LittleJohn reports.

“We'd like to see folks like the city, county and A-B Tech adopt similar policies,” says Leroy. “From our conversations with those players, there's a real desire to do this kind of work. They recognize they're doing projects in neighborhoods where there's high concentrations of unemployment. But it's very difficult for them, at times, to connect the dots between that work and the issues of poverty in the community.”

To Asheville GO, on the other hand, this new approach merely extends their existing focus on sustainability, Leroy explains.

“It's not enough to think about solar power and energy efficiency,” he maintains. “You also need to think about how people fit into that equation. Is it really sustainable to go and plop an $8 million LEED-certified building in a low-income neighborhood without talking to those folks and trying to open the door for them to get some opportunity?”

At the Aug. 8 groundbreaking, Robbs came out with the rest of the demolition crew — including his father, Ernest Robbs Sr., who attended school in the building years ago.

The younger Robbs, meanwhile, is looking to the future. “This is the type of program the community needs,” he asserts. “Without it, you'll have a lot more people going back through the same old cycle.”