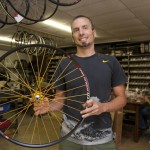 One spoke at a time: Jacob McGahey, operations manager at Industry Nine, shows off one of the company's locally manufactured bicycle wheels. photos by Jonathan Welch 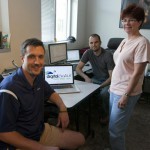 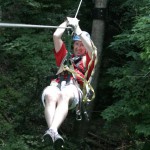 Trusting in your business model: Adventure America Zipline Canopy Tours CEO Jeff Greiner takes a ride on one of the company's routes.

Even in the midst of the Great Recession, some local businesses are doing quite well. What have they figured out that others haven’t? What can we learn from them? Here’s what three successful startups had to say about their own adventures on the road to economic viability.

It might seem perfectly natural that a cycling enthusiast raised in a machine shop would try to reinvent the wheel. What’s surprising is how successful Clint Spiegel has been. As co-founder of Industry Nine, a West Asheville bicycle components manufacturer, his designs for performance hubs and wheels have been enthusiastically embraced by many in the cycling community.

Spiegel designed the company’s signature mountain-bike hubs after Turnamics Inc., the contract manufacturing firm he co-owns with his father, Harvey Spiegel, had invested $250,000 in developing a similar hub for another manufacturer — only to have the project dropped.

“We went into initial production, but … we never really got the design exactly where we wanted it,” Clint explains.

The story could have ended there, but some years later, after taking up cycling himself, Spiegel got inspired. “During the riding, I started thinking of new ideas of how to do the hub, came up with some things, and we decided to launch Industry Nine,” he reveals. In 2004, they began selling Spiegel’s new designs: The hubs are made entirely in-house on equipment shared with Turnamics. In the wheel sets, only the bearings and rims are outsourced.

From the beginning, the company has seen steady growth, and today, Industry Nine’s nine full-time employees turn out about 170 completed wheel sets per month. “We grew over 30 percent last year,” Operations Manager Jacob McGahey reports. “Not quite as strong this year, but still strong.”

That growth has come despite the challenges of selling a premium item (with an equally premium price) in a difficult economy. “We’re certainly not selling a cheap product. Our road wheels start at $950 per pair, and the mountain wheels start at $1,085,” notes McGahey, adding, “There’s a lot of people who are willing to spend more money on their bicycles than their car.” The company mostly sells its products through independent bike shops, with dealers in 47 states and 22 countries.

Basing the business in Asheville gives Industry Nine a ready-made proving ground for new designs. “All our initial testing is done on the technical trails around here,” McGahey explains. “We’ve got mud and roots and rocks: Anything that you’re going to have anywhere else in the country, we have on the trails here.”

Convenience aside, Spiegel has a deeper reason for keeping Industry Nine in Asheville. “Particularly because of the recession, we have worked hard to keep manufacturing here, whereas in a lot of the bicycling industry, there’s probably been an acceleration of outsourcing to China,” he points out. “We just believe we need the jobs in this country.”

Well before the current zip-line explosion erupted, Jeff Greiner was already planning to make the high-flying activity the next big thing in Western North Carolina. Greiner, the CEO of Adventure America Zipline Canopy Tours, says he got the idea after trying a zip-line tour himself during a family vacation in the Caribbean five years ago.

The basic principle is simple. A cable is strung between two platforms, often in the trees. After strapping on a harness, participants standing on the higher platform clip onto the cable, step off — and gravity does the rest. The quick ride provides enough adrenaline to satisfy the adventurous yet is tame enough to accommodate others. According to Adventure America, the oldest person to ride one of the company’s zip lines was over 90.

Greiner knows a thing or two about the outdoor-adventure business. When he was 9, his parents started Wildwater Adventures, a WNC-based whitewater rafting company. That was 43 years ago, but the family connection gave Adventure America the perfect jumping-off point: The company installed its first zip lines near Wildwater’s Nantahala Gorge center three years ago, and the response was immediately positive. “Right from the beginning, people were coming just for the canopy tours,” Greiner recalls.

Adventure America soon added four more tours in WNC, South Carolina and Tennessee, each containing at least nine individual zip lines. On Aug. 31, the company plans to open what Greiner says will be the first urban zip-line experience in WNC, adjacent to the Crowne Plaza Resort in West Asheville.

During peak season (typically June to August, when school’s out), Adventure America has some 80 employees these days, including a full-time arborist. “All the trees we’re working with are being cared for,” says Greiner. “These trees are probably in better shape now and more cared for than before we came in.”

Asked to explain his company’s rapid growth when many tourism-dependent businesses are struggling, Greiner says the zip-line experience’s “newness and freshness has definitely been great for us in a time when things have been slow and fluctuating.”

He also feels Asheville’s strategic location and reputation as a tourist mecca help. “We have some of the most beautiful mountains, but we’re within a day’s drive for a very large population,” notes Greiner.

Randomly ask 10 people around town to name a business segment where Asheville has some catching up to do, and chances are someone will mention technology. Troy Tolle would like to change that, and DigitalChalk, the company he co-founded, is proof that there’s life in Asheville’s tech sector.

Launched in 2007, DigitalChalk provides an online training platform, based in cloud computing, that enables people to create and deliver continuing-education courses online. Once an account is set up, users simply upload all the content for their courses and use DigitalChalk’s proprietary software to create lessons, tests and even graduation certificates. Students even pay for their courses through DigitalChalk’s system, which deposits the money directly into instructors’ accounts.

Clients include businesses looking for new ways to train staff, consultants who sell their services to businesses, and schools looking to offer continuing-education courses online. DigitalChalk’s main selling points are flexibility and ease of access — thanks in large part to the fact that the company’s entire system, including software and every single customer’s lessons, is based in the cloud, housed in server space the company rents from Amazon.com.

In practical terms, that means a business model that only a few years ago would have involved producing and selling software on CDs or DVDs is now completely virtual. It also means that only three of the company’s 16 employees work at the office in Biltmore Park Town Square. The rest are home-based, scattered across the country.

The formula appears to be working: Students on six continents have taken courses using DigitalChalk’s training platform. “Last year was a huge year for us: We grew over 300 percent,” notes Tolle, adding, “We’re growing just as fast this year.”

Beyond his own company’s success, however, Tolle believes Asheville could become a mecca for tech startups. “There’s just some extreme talent here,” he says. “It’s just pulling those people out of the woodwork that’s hard.”

One thought on “Vision quest”