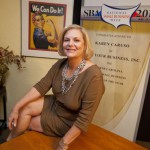 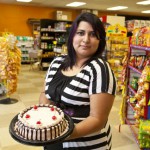 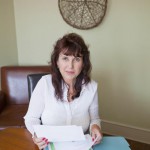 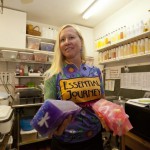 Kimberly Masters has always been the crafty type. As a business student at UNC-Greensboro, she made things in ceramics classes. Later, she moved on to fleece hats and headbands, which she made while working as a bicycle tour guide in Alaska.

It was a more recent trip to the doctor, though, that led her to create the business she runs today.

“I got into soap because I had sensitive skin. My doctor said, ‘Your soap is drying you out’,” Masters recounts. She decided to apply her business education to soap-making and started Essential Journeys in 2004.

And so far, it's been a good move. One reason for the company’s success may be Masters' more whimsical designs, such as a cucumber-melon-ginkgo soap with the outline of a gingko leaf encapsulated in the translucent bar. Then there’s her key-lime soap, made with a sailboat shape inside of it and a bit of the mast sticking out of the top.

Such whimsies set the Essential Journey's products apart from the ubiquitous monochromatic bars produced by others. “We try to do iconic images that bring back memories, and evoke a sense of time or place,” Masters says.

It seems to be working. The company has grown steadily since its inception, with its products sold in more than 200 locations across the United States. Masters still makes all the soaps — more than 50 varieties — in her West Asheville home. Recently, Essential Journeys contracted with a Western North Carolina manufacturer to produce lip balms, bath salts, lotions and soy candles.

In another sudsy twist, about 30 percent of the company’s orders come from other businesses looking to have a special soap made for them. Masters has made a modern-art-themed soap for the Philadelphia Museum of Art, and a garden-themed one for the North Carolina Arboretum.

“The main things with business are relationships, communication and building community," says Masters. She also attributes her success to Asheville’s welcoming climate toward women business owners and its focus on "local." "As a woman I think that’s one of the assets I have: I’m not just trying to spearhead something that doesn’t have a connection to anyone, and people want to support local businesses."

Maria Soto has entrepreneurialism in the blood. “My family, all of them have restaurants and stores, and beauty salons,” she asserts. So it’s not surprising that Soto would follow in those familial footsteps by partnering with her husband, Luis Prieto. In 2010, the couple opened Los Nenes Bakery, a Mexican-style bakery in West Asheville.

What is surprising, though, is how young the couple was when taking the small business plunge: Soto was just 21 and her husband was 22. “We’re the youngest on both sides of the family, so we call it ‘Los Nenes’ which means ‘the babies.’ We’re the babies of the business.”

After its first year of business, Los Nenes Bakery was doing well, so well that when the owner of the Hispanic grocery store next to their shop was looking to sell, Soto and Prieto bought the business. Now their baked goods are sold alongside other difficult-to-find Latin American foods.

What Los Nenes offers is a taste of home, although similar products might be found in mainstream groceries, Soto notes. "The cuts of meat, the fruit — everything is different. It tastes different,” she says.

Soto also notes that the evolution into a full-fledged grocery store has brought a synergy to the business, with customers from both businesses spilling over into each other. “Customers will come in for the bread, and then get eggs, milk, or whatever they need,” Soto says.

With that kind of success, Soto and her husband recently opened a second bakery and grocery in Swannanoa. “When we opened the [Swannonoa location] we thought it was going to be slow for the first month," she continues. "But it’s been almost the same as here. So it’s really, really good.”

For most folks, one business is more than enough. But small-business accountant, real estate agent, and women-in-business booster Cynthia Gaddy likes to wear more than one hat. “People ask me: ‘What do you do?’ or ‘What do you love the most?’" she says. "I love what I’m doing … I love educating the public on both issues more than I do anything else,” she adds.

So on top of her business projects, Gaddy chairs the community-relations committee for the Asheville Board of Realtors and teaches classes in small-business accounting for Mountain BizWorks.

An Asheville native, Gaddy started her career after getting an associate degree in 1982, but formal education was just the beginning. “I would just move from job to job until I learned everything about accounting. I worked as a staff accountant for a CPA. Then I got into taxes. I worked for [H & R] Block for four years, and I always did some accounting out of my house,” she reveals.

Gaddy eventually decided to turn those side jobs into a new company, Crystal Clear Business Works, in 1999. Since then she’s served as accountant to area businesses of all sizes, from small one-person businesses to large multi-million dollar firms.

Fifteen years ago her foray into real estate was born out of a passion for home ownership, she explains. "I got [my] license [to help] get working people into housing and to get women into housing.” she says. Gaddy sees both home and business ownership, particularly for women, as being a stepping stone toward independence. “Even [with] a career in the mainstream, [women] have to deal with sexual harassment [and] wage discrimination. If you have your own business, you have control over what you do,” she says.

For Gaddy, the message is that business ownership is its own goal, and the rewards come in the freedom to work however one chooses. “I can’t do 9-to-5 … I’m a mission-, project-based person, and I don’t want to waste my time piddling around or sending 35 emails around saying, ‘What do we need to do?’"

Says Gaddy, "Lets just do it.”

Despite her many years' experience in loss prevention and security, it wasn't until 1995 that Karen Caruso decided to run her own business in the field. While watching an episode of The Oprah Winfrey Show that discussed abusive childcare providers, she came up with the notion to create Mind Your Business, Inc. The move has paid off: She was recently named the 2011 North Carolina Small Business Person of the Year by the U.S. Small Business Administration.

In the beginning, Caruso was motivated by her desire to help parents make better decisions when selecting a childcare provider. “Watching Oprah Winfrey that day, and watching the mother who had a son nearly the same age as my daughter at the time — less than a year old, and her son was just murdered by their nanny — was just my life-defining moment,” says Caruso.

That epiphany led Caruso to make full use of her experience conducting background checks. Sensing a gap in the local market, she started Mind Your Business in the basement of her home in New Jersey with two employees and $2,500. There, she helped people protect their loved ones by running background checks on day-care providers and nanny agencies.

When the chance came to move to Western North Carolina, Caruso (who was raised in the state) took it. “I would really rather raise my family in the Southeast than the Northeast, so when we had the opportunity to move back, I was all for it,” she recalls.

That move brought Mind Your Business to its current home in Hendersonville.

Since then, the business has posted record profits in recent years, and it has expanded. Caruso's company now does drug and alcohol testing, pre-employment credit history checks, education and professional license verification, Social Security number tracing and reference checking for other companies' potential new hires.

Being a woman business owner in a field traditionally dominated by men has presented its own set of challenges, Caruso acknowledges. “Loss prevention and security is very much like the law enforcement industry. Just breaking into that circle has had its challenging times. I’ve lost contracts because of it. I’ve been called a pit bull in high-heels,” she says.

Despite those challenges, Mind Your Business has grown. Now the company, through various subcontractors, provides its services to companies in all 50 states and in countries throughout the world. Since being named N.C. Small Business Person of the Year, even more opportunities have arisen. The next step for the company, according to Caruso, is developing its government-contract business. “The federal government is the largest customer in the world … I’m not just limited to customers in my back yard,” she adds.

Though it wasn’t a problem for her, Caruso points out that finding startup capital can be a problem for women-owned businesses. “Most women, if you look at a woman and her history, it’s tied with a husband … and most of the assets are in the husband’s name or held jointly and you have to separate that out and have her stand alone, and that can be an issue.”

Caruso also notes the importance to new small businesses of using resources like SCORE, a nonprofit group partnered with the U.S. Small Business Administration. SCORE offers workshops and assistance to small businesses around the country and was particularly helpful to the early success of her business. “People, especially women, don’t realize they can walk in, schedule an interview, and talk to someone about their business idea. And it’s not ridiculous, and it’s not far-fetched. It can be anything that they want to do,” says Caruso.