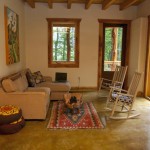 At home with nature: Ryan Lubbers’ home is one of the buildings to be featured in the Hickory Nut Forest eco-community during ECO’s Green Home Tour, set for Aug. 20. The house makes extensive use of wood harvested on the site, including the bark shingles, exposed beams, and the timber post seen through the door in the corner of the living room, above. Photo by Jonathan Welch 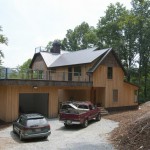 Finishing touches: Ryan Lubbers and his team took care to use every scrap of wood, including some large trees taken down on the site, to build his house in Hickory Nut Forest eco-community. This home and other community buildings will be on view during ECO’s Green Home Tour, coming August 20. Photo by Jonathan Welch 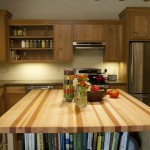 Where the hearth is: The community at Hickory Nut Forest is organized around a massive poplar, left. Lubbers’ home, at right, uses diverse wood species harvested on site, thanks to carpenter Nate Ballinger. Photo by Jonathan Welch

If the dog days of summer have left your home place looking a little tired, the Aug. 20 Green Home Tour just might provide some inspiration (see box, “The Grand Tour”).

Organized by the Environmental & Conservation Organization of Hendersonville, the annual event aims to show local homeowners how they can enjoy a comfortable, attractive living space while saving money on their monthly bills.

The self-guided tour, says Executive Director David Weintraub, will “showcase beautiful homes demonstrating that building green or renovating green doesn’t have to cost a lot and can save big-time in the long run.”

ECO’s self-guided Green Home Tour is scheduled for Saturday, Aug. 20 from 10 a.m. to 4 p.m. For tickets and more info, visit http://eco-wnc.org, or call ECO at (828) 692-0385. Tickets are also available at the visitors’ centers in Asheville and Hendersonville, and at Wild Birds Unlimited in Hendersonville.

Besides featuring a smaller carbon footprint, these structures work closely with nature — both by using green technology and by deliberately integrating elements of their surroundings, as the area’s early settlers did. “Local old-timers understood that huge homes on mountain ridges weren’t a practical solution,” he notes.

The tour comprises five homes, some new and some newly greened; three are in Hickory Nut Forest, a 200-acre eco-community in Gerton (near Chimney Rock Park). Also on view will be the Laughing Waters Community Center, built on the site of a 19th-century gristmill; like several of the homes here, the handsome structure was built mainly from wood harvested on-site. Plans call for tapping an adjacent mountain stream to supply all the electricity for the center.

In addition, workshops on sustainable living, green technology and permaculture offered as part of the tour will be presented here. The tour also includes the Hillandale Elementary School in East Flat Rock, one of the first LEED Gold-certified schools in Western North Carolina, according to the architects.

Lynn Pall and Doug Allen’s energy-efficient home includes a Trombe wall, builder Sam Koerber explains. From the outside, it just looks like a big, south-facing window. But a concrete “heat sink” absorbs solar energy by day and slowly releases it to the interior at night, thus helping warm the house during cool weather. A living roof will soon be installed on the adjoining garage to provide edibles and medicinal herbs year round.

Lubbers says he’s thrilled to be able to share his passion for the environment. “We don’t want to have a gated, locked-off place,” he explains. Visitors drop in frequently to use the miles of surrounding forest trails, he reports. “The people who’ve come out here are very respectful. We plan to continue that as long as we can.”