When we think of helping others in need in our community, it’s natural to picture direct, practical actions, such as providing food, building houses, donating warm coats or mentoring young people. As Mother Teresa famously said, “Help one person at a time and always start with the person nearest you.”

That notion was challenged, however, at the United Way of Asheville & Buncombe County’s 20th annual legislative briefing, held Dec. 8 on the UNC Asheville campus. Speakers argued for an increased focus on lobbying and advocacy to help shape policies affecting thousands who are in need.

Addressing a crowd of almost 150 nonprofit staff members, directors, volunteers and elected officials — including state Reps. Brian Turner and John Ager and Asheville City Council members Gordon Smith and Gwen Wisler — local philanthropist Jennie Eblen urged service providers to expand their focus beyond the direct services. “Do you have the awareness that your direct service will never likely be enough to fully address the complexity and the scale of the challenges in our community?” Eblen asked.

Direct services alone, she stressed, are only a part of nonprofits’ role: “If we look upstream — at the conditions and the policies that underlie the issues — that might be the solution.”

Advocacy, Eblen went on, can bridge the gap between the services nonprofits provide and the needs that far exceed nonprofits’ resources. “Not only can we do public policy advocacy, we should,” she urged.

Addressing those he called the “smart, intelligent and beautiful people who are part of this movement trying to make our community a better place, a more resilient place to be,” Greg Borom, director of advocacy for Children First/Communities in Schools, offered practical strategies for public policy advocacy.

“People in our sector tend to have a perception that nonprofits can’t lobby,” Borom said. That’s not true, he continued, but there are rules around what nonprofits must do to preserve their special status. “The big thing you need to remember is that those groups can never ever, never never ever, endorse or oppose political candidates or political parties,” he explained.

As values- and issues-oriented organizations, however, nonprofits can and should speak about issues in both election years and nonelection years, Borom said. He also urged nonprofits to support voter registration as well as other efforts to increase political participation among the communities nonprofits serve.

Nonprofits are required to file paperwork to disclose funds they spend on advocacy; Borom suggested that attendees consult the website of the N.C. Center for Nonprofits for more detailed information and guidance. He called that organization’s director of public policy and advocacy, David Heinen, a “real guru” on the subject of rules governing nonprofit advocacy spending and recommended that attendees use Heinen as a resource if they have specific questions on the topic.

Borom advised nonprofits to create a plan for devoting organizational resources to advocacy and for determining which issues to focus on. Having a plan helps nonprofits develop strong, unified and effective communications to policymakers and those who influence them. And it avoids the shock of seeing a staff member or volunteer “on the front page of the newspaper about some issue you didn’t know they’d be speaking about,” Borom said.

“Make it a team effort,” he concluded, “so that you can all embrace it and get behind it. Because when we do that as a nonprofit, we can have a powerful voice.”

Annaliese Dolph, registered lobbyist for the United Way of North Carolina, outlined the current legislative landscape in Raleigh for issues of concern to nonprofits.

As North Carolina’s economy continues to strengthen,  Dolph reported, “there’s a question of what we’re going to do with those increasing revenues.”

Philosophies differ between the two state legislative bodies: “The Senate has a very austere approach and would like to put a lot of money into savings while ratcheting down our spending, while the House is interested in starting to reinvest in some of the infrastructure, education and health programs,” said Dolph.

That tension will continue to influence the policymaking dynamic in Raleigh, Dolph predicted.

Ron Katz, director of the community fund for the United Way of Asheville & Buncombe County, said after the meeting that his organization encourages a “nonpartisan approach based on working cooperatively with elected officials.” Katz also pointed out that the meeting had been broadcast via video live streaming to allow partners across the region to access the briefing as it happened.

“The United Way is a strong believer in democracy. For the democratic process to work for everyone, people on all levels must participate. Our role is to support individuals and other organizations as they advocate for their issues and passions.” 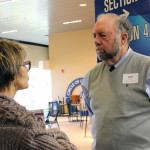 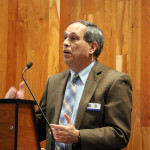 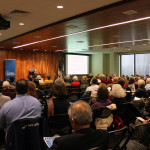 Greg Borom of Children First/Communities in Schools addresses the crowd 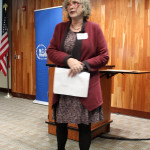 Jenny Eblen talks about the importance of nonprofit advocacy 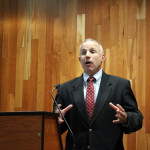 Ted Fitzgerald of the N.C. Board of Elections explains 2016 Voter ID requirements 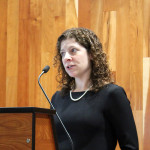