For years, people in Asheville have confronted three visions for city-owned property at Haywood Street and Page Avenue.

One is the area’s current jumble of cracked asphalt parking lots alongside a fenced pit.

Another, an image of a verdant park with mature trees, graces yard signs throughout the city.

Finally, park supporters can’t purge from memory the rendering of a tall corporate headquarters building from marketing materials assembled as part of a city effort to sell the property to a developer.

Now, after a year of meetings by a city-appointed volunteer committee to develop a community vision for the site, there’s something new to look at — though the visuals weren’t commissioned by the city and don’t represent any official plans. Rather, the 13 design concepts shown April 28 at the Center for Craft, Creativity and Design are the creations of architecture students at Clemson University.

“Now I think we finally get to see that it’s not an either/or question,” said Chris Joyell, speaking of the public discussion surrounding the area that frequently pitted supporters of a park against advocates for some form of development. Speaking at the exhibit, Joyell — who is executive director of the Asheville Design Center and served as facilitator for the community visioning process — expressed relief at moving to the next stage of planning for the site. Asheville City Council voted to issue a request for qualifications for professional design firms, though that process hasn’t yet begun.

While he had refrained from expressing his personal hopes for the process during the visioning effort, Joyell said, “I’ve always wanted to see Guastavino expressed in the landscape somehow.” Architect Rafael Guastavino designed the domed Basilica of St. Lawrence at the intersection of Haywood Street and Page Avenue. The structure, which is listed on the National Register of Historic Places, is believed to contain the largest free-standing vaulted ceiling of its kind in the country.

Now, in several of the students’ projects, Joyell sees evidence of Guastavino’s influence: One design includes a domed structure that could be used as a gathering space and for shade, while others repeat the basilica’s elliptical form or its distinctive herringbone tilework pattern in a variety of ways.

“No matter what, these students are going to show us that there are so many different ways that we can tap into this problem. And to limit ourselves to just one outcome, I think really robs us of the full potential of the site,” Joyell said.

But how can Ashevilleans who missed the one-afternoon show of the students’ work see the designs?

In addition to a website that will display images from the projects, Joyell said he hopes to arrange a longer exhibition of the students’ presentation materials, ideally on the Haywood Street site. But neither of those initiatives has been finalized, so design fans in Asheville will have to wait to see what shakes out.

Lauren Grzibowski of Michigan, a candidate for a master’s degree in architecture, presented a design called “Eskers.” An esker, she explained, is a landform of rounded hills created by receding glaciers. In her design, small mounds recall the mountains surrounding the site. Within some of the mounds are underground spaces with domed ceilings.

The undergraduate team of Colin Bland of South Carolina and John Owens of Maryland proposed “a platform construction that deals with the topography,” said Bland. As pedestrians move from Haywood Street toward the Grove Arcade, he said, “Suddenly you realize, ‘Oh, I am 20 feet in the air.'” But don’t worry: Circular openings in the platform are surrounded by railings, so “they’re safe,” said Bland.

A bold feature of Bland and Owens’ project is its suggestion to move Haywood Street to the general area of an existing alley that connects Haywood to Battery Park Avenue. That shift, they said, would make the area in front of the basilica “a higher-quality space.”

Of their process, Owens said, “We took data, along with what people in the community have to say and tried to come up with a design that meets both those things.” This was the first time in his architecture career, Bland said, “that I feel like I haven’t been designing in a vacuum.”

Another pair of undergraduates, Diego Bazzani (whose home is in Atlanta) and Eric Bell (who hails from South Carolina), sought to maximize the flexibility of the site in their project, “Textile.” Bazzani explained the duo had aimed to create “a time-based strategy for weekends and weekdays, where parts could be shut down, rerouted for the possibility of big farmers markets on Saturday mornings. If there’s ever a huge concert at the Civic Center, this could all become spill-out space. Weddings, you could take photos there, while still allowing cars to move through it.”

Jess Dancer, a master’s candidate from Cincinatti, said she was inspired by “all the little nooks and crannies of Asheville — like Wall Street.” In her project, she also considered “invisible links in the city and how the pedestrian can get through the city using routes that aren’t necessarily the main roads of travel.” Dancer proposed that pedestrians travel across the site in the east-west direction, with “points of pause” situated along the area’s north-south axis. 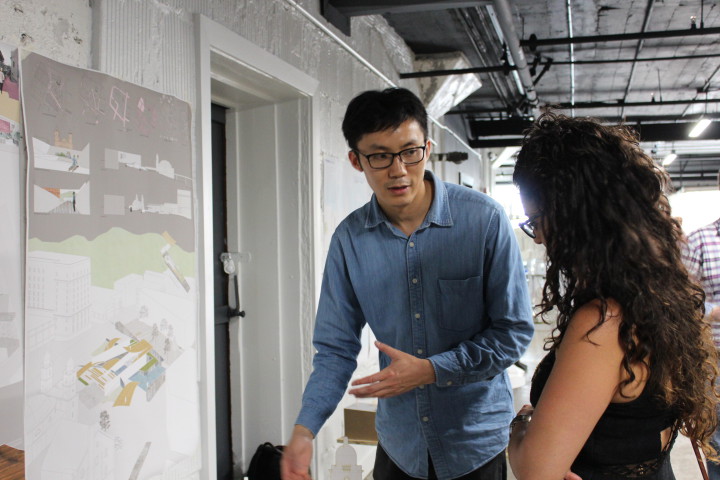 Master’s candidate Yage Chen presented “Fall in Asheville,” which proposes bridges and ramps to capitalize on the topography of the site. Photo by Virginia Daffron 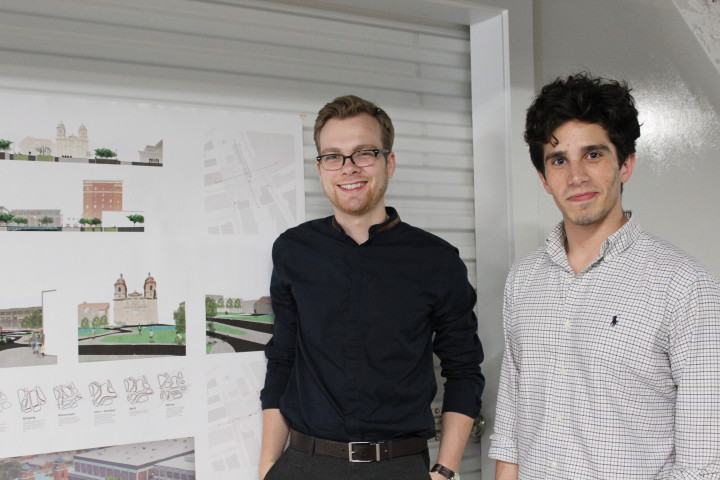 Eric Bell (left) and Diego Bazzani proposed a flexible design that would accommodate a wide range of uses and configurations. Photo by Virginia Daffron 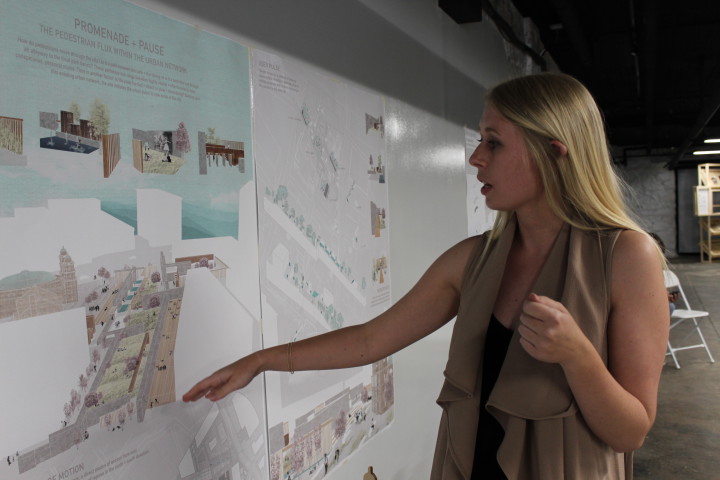 Jess Dancer explains how her project creates “nooks and crannies” while moving pedestrians through the city. Photo by Virginia Daffron 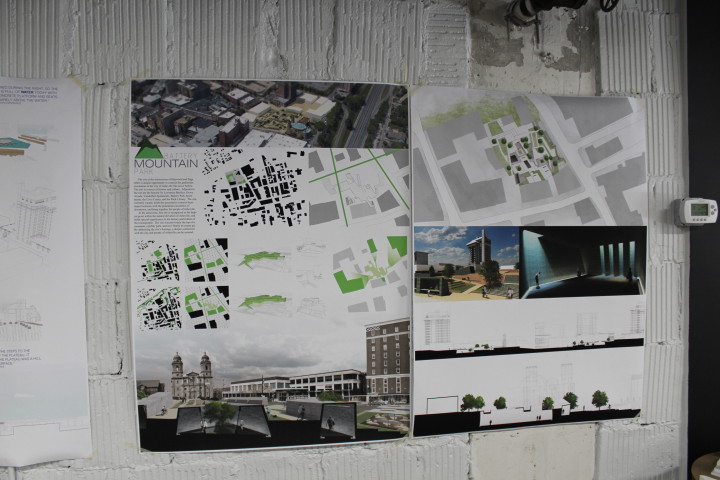 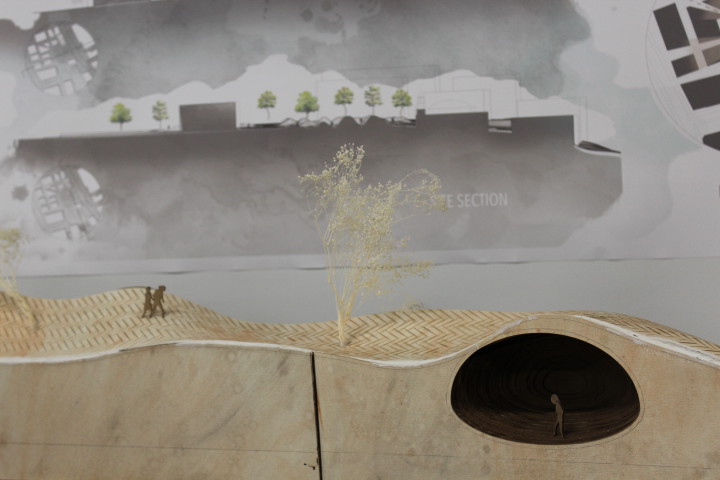 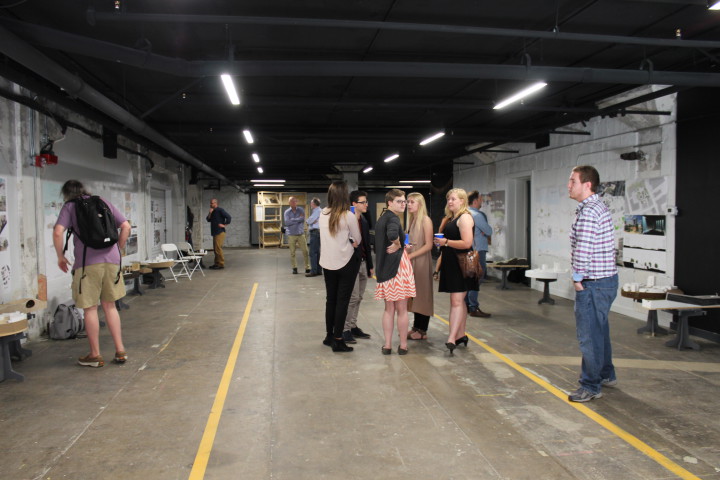 The exhibition was held in the basement of the Center for Craft, Creativity and Design. The gallery space is accessed from Carolina Avenue. Photo by Virginia Daffron 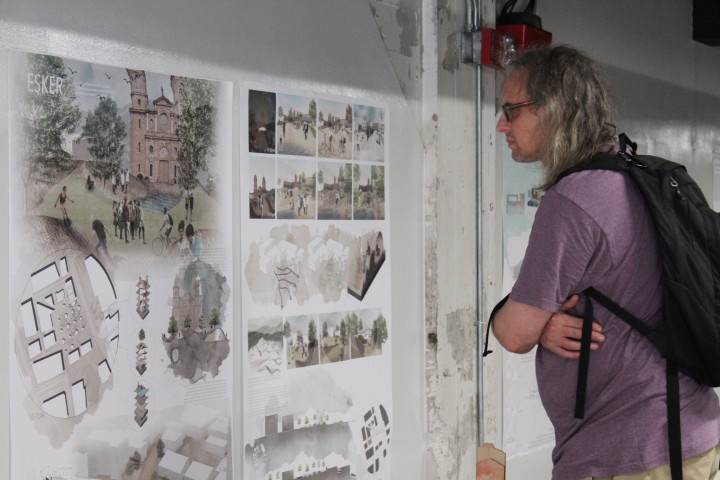 A handful of attendees studied the students’ designs. Photo by Virginia Daffron

Joyell says he’s excited about plans for temporary uses on a portion of the site. Where the building that housed Asheville Sister Cities once stood, the Design Center hopes to create a community garden. The installation will also include a water catchment system, which Joyell said may serve as a model for other projects planned through the city’s new Asheville Edibles initiative. That project, which will be run by the city’s Office of Sustainability, will allow residents to create community gardens on city-owned land. Many of the potential garden sites, Joyell explained, don’t have water lines. Thus, figuring out how to provide a water source will make the land much more usable for growing food.

“As we build things,” Joyell said, “we will share the plans with anyone in the public that wants them. We’ll also price them out, so if you’re interested in a seating structure that doubles as a raised bed, we can say, ‘Here’s the materials, here’s how to construct it, and here’s the cost.'”

Serving the needs of residents of the Battery Park and Vanderbilt apartments — who have long requested support for their interest in establishing and maintaining a community garden on the site — will be a nice change of pace after the arduous visioning process, Joyell said.