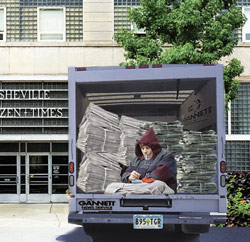 Asheville by Way of Greenville, Monday — There have long been whispers that the city of Greenville, S.C., quietly handles its homeless problem by providing the city’s most aggressive and problematic indigents with one-way bus tickets to Asheville.

Greenville city officials deny the allegations, pointing out Asheville’s $27 million advertising push on the benches of Greyhound bus stations. Either way, a short walk through downtown Asheville provides any skeptical naysayer with empirical evidence that, 1) Angry drifters are the spice of life, 2) Greenville has a magic pepper grinder full of angry drifters, and, 3) Asheville forgot to say “When.”

Now, Greenville officials are also denying that they are flooding Asheville with unwanted daily newspapers that no city in its right mind would willingly and knowingly accept.

“Look, we have our own lackluster-newspaper problem to deal with,” said Steven Brandt, who is responsible for finding homes each day for about 100,000 unwanted newspapers in Greenville.

Then what’s up with all the crappy papers arriving in Asheville daily from Greenville? As his defense, Brandt points out that he can’t even successfully distribute Greenville papers to Greenville, let alone Asheville.

“And one look at our delivery drivers bee-lining from the printing press to the recycling bins will tell you that our papers are all accounted for,” Brandt adds.

Asheville residents are not convinced.

“They’re everywhere, making promise after promise to get their acts together and never following through,” said one north Asheville homeowner about the bussed-in newspapers. “And just when you feel so sorry for it that you relent and agree to give it 50 cents, it hits you up for another quarter.” 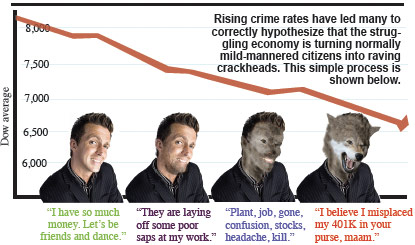 Many Asheville residents have applied to fill a vacant Asheville City Council seat. Applicants were asked to fill out a form, answer a questionare and provide references.

Below are questions that Asheville City Council members will ask after contacting applicants’ references:

1. It says here that [candidate] cleans the lobby and bathrooms. What other responsibilities did the candidate have that qualify him/her to make decisions for approximately 75,000 people?

2. In his/her capacity as a [psychologist/retiree/unemployed person/unemployed retired consult], did candidate show aptitude for making decisions for the entire city? I mean, on a scale of one-to-10. Whoa. How about on a scale of five-to-10?

3. Does the candidate get along well with other egomaniacs? Say, half a dozen?

4. Did the candidate’s work performance make you believe candidate would, if candidate was required, show up once a week to ham it up for television cameras?

5. What was the candidate’s reason for leaving the fifth grade, Mrs. Stevenson? Do you even remember the candidate? Why do you think the candidate listed you as a reference?

6. The candidate claims she has organized the entire community several times. Did she do this while on the clock at Bojangles, or while smoking joints by the dumpster during personal breaks?

8. What was the candidate’s reason for leaving the position? Oh, they lost in the primary? I see.

9. What was candidate’s starting and ending salary? No, I understand this is not a for-profit organization, but you still pay your employees. No? Oh, you’re a make-believe organization? What, in theory, would you pay if you did in fact exist outside of inaccurate job applications? OK, what’s the ruble-to-dollar exchange rate?

10. How long have you been a childhood friend of Terry Bellamy? Your entire childhood? I see. No, I remember you, honey, I’m just trying to be professional here. Of course you’re going to get picked, just play along for a minute.

Money-saving Strategies for the Citizen-Times:

• Copy Greenville’s local paper and replace every instance of “Greenville” with “Asheville.”

• Every other day print one-page paper with the headline “NOTHING HAPPENS!” and a picture of a puppy.

• Deliver more news on that new Intertube Highway we’ve been hearing about.

• Mandate from home office: “Get drunk. Buy a gun. Go out and make some news.”

• Clip out the best coupons before mailing Sunday paper.

• Rename Citizen-Times “Mountain Xpress.” Hire a bunch of hippies to run the place.

• Have Asheville citizens write their own news in a new section called “Screw It! You Write the Damn News.”

• Cautiously and non-judgmentally ask member of a stereotypically frugal ethnic group for tips.

• Have Clark Kent drop the bullshit already and just fly to story locations.