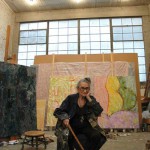 Alice Sebrell, program director at the Black Mountain College Museum & Arts Center, took this shot of Pat Passlof in her New York studio. Sebrell says Passlof liked the photo because “she saw it as a summation of her life and work at this stage, at the end stage. It put an image to that place for her.” Photo by Alice Sebrell 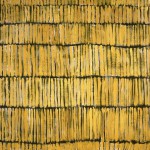 From a series on writers, “On the Road” is an abstract work that references the author Jack Kerouac.

Painter Pat Passlof had what’s known as an artistic temperament. Those who knew her called her honest and funny, but her "refreshingly non-PC humor" (according to Alice Sebrell, program director at the Black Mountain College Museum & Arts Center) could be barbed.

"She was definitely extraordinary," says local artist Connie Bostic, who (with Sebrell and Denise Drury, curatorial specialist of Western Carolina University's Fine Art Museum) curated Pat Passlof: Selections 1948-2011, two companion retrospectives of Passlof's work. “She was not an easy person. She had different ideas, but she was kind and very accepting.” And, "her students must have been the luckiest people in the world, because she wrote them detailed letters."

So strong were Passlof's opinions that even though she passed away in November, her touch is evident throughout the exhibits that open this week in Asheville and Cullowhee.

"She had pieces that she was adamant about," says Bostic of the selection process. Some work that Bostic, Sebrell and Drury admired had to be left behind in order to best represent Passlof's oeuvre, which spanned eight decades.

"Our main goal was to showcase what she had done over her whole career, starting with the very early pieces," says Bostic. The retrospective includes the two pieces that Passlof completed at Black Mountain College where she was a student during the summer of 1948.

In a way, that's where it all began. That experience retained its meaning for Passlof throughout her life, says Harris, "because that's where she met de Kooning."

Passlof was 20 when she came to North Carolina. A budding artist at the time, she'd just seen a Willem de Kooning exhibition which, according to Harris, "she felt changed her life."

Georgia-born Passlof (whose surname was originally Passloff, but she dropped an f early in her career) had moved to New York as a child, and was already studying art when she discovered de Kooning's work. She enrolled in a summer course at Black Mountain College hoping that someone there could put her in touch with the Dutch-born abstract expressionist. According to Harris, "As it turned out, he replaced Mark Toby as an instructor that summer." Following the session in North Carolina, Passlof's father paid for her to further study with de Kooning in New York.

Black Mountain College was a perfect storm of innovative instructors, inspiring natural surroundings and students driven by a society in flux. World War II had ushered in major changes, from the disillusionment brought on by the Holocaust to the shift of women entering the workforce and tasting independence. Industry was moving from the farm to the city, the push for Civil Rights was mounting and the GI Bill allowed more Americans to pursue higher education than ever before. At Black Mountain College, says Sebrell, "All of these elements and streams came together and had an enormous impact on individual people and bigger subjects like the arts, dance, music and the cultural life of the 20th century."

Passlof's work maintained a de Kooning influence into the 1950s, with aspects of surrealism also apparent, according to Sebrell. "As you get into the '60s, the work is still very abstract, but less influenced by de Kooning in an overt way."
In the '90s Passlof had a distinct period of figurative work which Sebrell says deviated from the bulk of her career during the '90s and 2000s.
"It's more purely abstract though I think there are references in the work to nature. They don't really read that way," says Sebrell. Passlof did a series about writers, such as "Walt Whitman" ("More of an interior abstract understanding of Whitman," says Sebrell) and "On the Road," which references Jack Kerouac.

Another body of work, called “Eighth House” — following the passing of Passlof's husband, the painter Milton Resnick — had to do with the astrological area of life in which metaphorical death and purification occurs. "Pat was very much into astrology," says Sebrell. "I remember when Connie and I first met with her, she asked us both when our birthdays were. We were getting along great, but she needed to confirm that we could be friends based on our astrological information."

Bostic recalls that Passlof had so much work in her studio, the curators from WNC didn't get to look at all of it, due to the sheer amount. Bostic describes the scene as "racks and racks and racks of work. Stacks of work. Flat files filled with work."

She adds, "The thing that was important to us was that she be very happy with what we were choosing. We had her guidance because she'd come up and say look here or look there."

Passlof lived and worked — actually, up until the last few weeks of her life — in a former synagogue on Manhattan's Lower East Side that, according to New York Times, "she had bought in the early 1960s and renovated almost entirely herself." The Times continues, "Ms. Passlof’s husband, the painter Milton Resnick, had, until his death in 2004, lived and worked in a renovated synagogue of his own, around the corner on Eldridge Street." It's an interesting insight into Passlof's life: She and Resnick were, in many ways, like husband-and-wife painters Frida Kahlo and Diego Rivera, at turns attracting and repelling each other in a tumultuous relationship.

"I can see, as strong as she was, that might have been a good thing," Bostic says of Passlof's and Resnick's separate living spaces. And yet, during her career, Passlof put Resnick's work first — another contradiction, especially for a woman considered an important part of the '70s feminist art movement.

"It was, unfortunately, very common for women artists of that generation to not get the attention that the male artists got," says Sebrell. "They could do their work, too, but they needed to be supportive of the men."

But Harris points out that when Passlof started to show her work in the '90s, her exhibitions always received large audiences and press attention from Art in America, The New Yorker and many others. "I don't feel that she felt really overlooked in the last 20 years of her life," says Harris. Passlof died with exhibits (one in December in New York, and the upcoming shows in WNC) still in the works.

As for Passlof's legacy, Harris says it's too soon to tell. But Bostic and Sebrell are both excited to see Passlof's work return to the place of its inception. Says Bostic, "There's a fearlessness about it."

what: Pat Passlof: Selections 1948-2011
where: The Black Mountain College Museum + Arts Center and Western Carolina University's Fine Art Museum
when: Thursday, Jan. 26 through Sunday, May 27. The exhibit opens on Thursday, Jan. 26 at WCU with a reception at 6 p.m. — the WCU College of Fine and Performing Arts is sponsoring a round-trip bus ride from Asheville to Cullowhee with an additional pickup location in Waynesville; it opens on Friday, Jan. 27 at BMCM+AC with a reception from 5:30-7:30 p.m. http://www.blackmountaincollege.org and http://news-prod.wcu.edu/2012/01/wcu-to-show-work-by-painter-pat-passlof