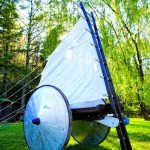 Chris Perryman built this oxcart as part of a butoh performance from the 2012 Happening. Photo by Michael Oppenheim 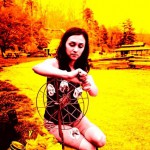 It was at a Black Mountain College celebration at Lenoir-Rhyne University where poet and musician Ted Pope met the writer Michael Rumaker. “He gave one of the most energetic readings,” Pope remembers. “I liked him right away.”

Rumaker, now 81, graduated from the short-lived but monumentally influential Black Mountain College in 1955, a mere two years before the school shuttered. He went on to write semi-autobiographical novels documenting his experience as a gay man during the 1950s and thereafter. Among his works is the memoir Black Mountain Days, about his time spent at that school, under the tutelage of modernist poet Charles Olson.

“Shamanistic androgyny” was a phrase Rumaker used, in that memoir, to describe Olson. “I think it sums up a lot about poetry and art,” says Pope. “A yin-yang of togetherness.” It was that phrase, too, that inspired Pope to create a performance piece that debuted at Asheville Fringe Festival and will be part of the upcoming HAPPENING, the fourth annual celebration of Black Mountain College. “It’s me describing what I see through Michael Rumaker’s eyes,” he says.

The event, which features a cocktail hour, family style dinner and a number of innovative acts by local artists of varied genres, is also a fundraiser for the Black Mountain College Museum + Arts Center (BMCM+AC) and the Media Arts Project (MAP).

Pope’s HAPPENING piece stems from a deep connection to Rumaker’s writing. “It’s my source material and I’m trying to soak it up like a sponge,” he says. And Rumaker, with whom Pope keeps in touch, is thrilled with the final product — a performance that includes Pope’s wife Laura on violin, son Nick on classical guitar and son Luke on spoken word. But not all of the performances are so directly linked to the Black Mountain College of the ‘40s and ‘50s.

“We’re not really thinking that we’re recreating anything. In fact, we’re very intentional about that,” says BMCM+AC program director Alice Sebrell. She describes the original Happenings at the school, the campus of which was located on the property now owned by Camp Rockmont, as a Saturday night performance, dance or theme party (motifs included “Greek” and “polka dot”). The similarities between then and now are, Sebrell explains, “where we have this shared meal and then we experience the performance or art or site-specific installations.”

Sebrell adds, “Part of our mission as an organization is to nurture the spirit of Black Mountain College as it exists today. The idea of artists collaborating and pushing boundaries. This is the perfect opportunity for that.” To recreate a happening, she says, would be pointless: “Black Mountain College was so forward thinking, that if we were backward thinking, we wouldn’t be being true.”

Painter and sculptor Severn Eaton is using his HAPPENING installation as an opportunity to push boundaries, not least of all not his own. Early blueprints for the project included a vortex concept with life and death on opposite ends; a spiraling mattress tunnel that leads participants to a cushiony room with a device for recording the experience of the journey; and a setup involving a series of phone booths, of a fashion, with a switchboard to randomize the connections between booths. “I don’t want this just to be a place where I do one of my projects,” Eaton says. “It has to be relevant to the event.”

Other work, to be shown at this year’s HAPPENING, includes Elisa Faires’ sound installation, “Dialoga Aquila” (inspired, in part by music theorist and Black Mountain College faculty member John Cage’s use of star charts as a compositional method) and “Spirit House,” a collaboration between Brandon Pass (an architect) and Libby O’Bryan (an artist and sewing manufacturing studio owner). These projects and others were funded at least in part through Indiegogo online fundraising campaigns.

And, new this year to the HAPPENING, are the Chance Operations. “In the applications that we asked for artists to submit, there was a way for an artist who knew they wanted to be involved, but didn’t really know how, to say ‘I want to be a part of it,’” says Sebrell. From that pool, three collaborative teams were formed. “So there’s that aspect of creating a site-specific performance with collaborators that you didn’t know before, that you were randomly paired with, that I think is really exciting,” Sebrell says. While the names were drawn from a hat, the teams were culled from multiple disciplines — such as members of Asheville Contemporary Dance Theatre, a designer from Organic Armor and musician Frank Meadows (who is involved with art and performance space Apothecary).

That project, like many others, was in development at press time. Those involved had chosen the steps (which run from the lake shore to the place where Lake Eden Arts Festivalgoers catch the zip-line) as their performance space. And really, the performance spots are not just mere stages but act, almost, as as additional tool or artistic voice.

Sebrell points out that the BMC-constructed Studies Building — the school’s signature structure — does not play much of a role in the HAPPENING because it’s too far off of the event path. But other buildings, such the stone roundhouse, the lodges and Eden Hall (aka the dining hall) are utilized, and these were an important part of the college’s day-to-day workings. Those dwellings were constructed by E.W. Grove (he of Grove Park Inn and Grove Arcade fame) when he developed the property, during the early 1900s, as a private resort.

Outdoor spaces are used, too, during the HAPPENING: Pass and O’Bryan will set up on the island. And Eaton’s installation, depending on which idea he goes with, will take place in the gymnasium or on the tennis courts. It’s most important, he says, “to make it work within the structure of the event.”

As an artist, Eaton says he creates the work he feels compelled to do, rather than trying to channel his creativity into “more commodity-based work.” “I’d rather put energy into one project a year, and do what I want to do,” he says. A big part of that process is in creating an environment — his last project was an installation at PUSH Gallery that required viewers to climb through a small opening into a room completely papered in billboard advertisements.

Eaton’s HAPPENING installation will be different from what he constructed at PUSH, but will share a philosophy. “Part of the role of the artist is to raise questions,” he says. “Not to be heavy handed, but to stir things up.”

But even more importantly, “I’m focused on the idea of having a transformative experience,” says Eaton. Which is a sentiment that could easily be echoed by Pope or by Meadows, or, for that matter, by Cage or Olson or Rumaker. It’s what made (and still makes) a Happening so happening.

One thought on “College application”