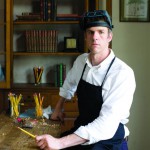 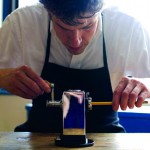 Is sharpening pencils a lost art? Was it ever an art to begin with?

To hear David Rees tell it, the answer to both questions is a resounding yes. He makes a sometimes-plaintive, sometimes-preposterous case in his new treatise, How to Sharpen Pencils (Melville House, 2012).

For the past two years, Rees has made a business of artisanal pencil sharpening. It might sound like a big joke, and maybe it is. But the guy is getting paid to sharpen pencils, to the tune of $15 a pop. So far, he's filled more than 500 orders.

Along the way, Rees, a North Carolina native who now lives in New York's Hudson Valley, has marinated enough on pencil sharpening that he's got 200 pages of insights on the matter to share. The book is part tutorial (with chapters like “Anatomy of the #2 Pencil” and “Protecting Your Pencil Point”), part cautionary tale (Chapter 12: “Psychological Risks Associated with Pencil Sharpening: Assessment and Coping Strategies”) and perhaps part performance art (the closing chapter, “How to Sharpen a Pencil with Your Mind,” is followed by an appendix of “Wines that Taste Like Pencils”).

Rees might seem a most unlikely pencil purist: He's previously and best known for his series of clip-art cartoons, Get Your War On, which skewered the pathos of the War on Terror and appeared regularly in Rolling Stone and other publications.

So, is How to Sharpen Pencils sincere or satire?

“A quick word to those who think this is a joke,” the humorist John Hodgman advises in the book’s forward. “Everyone who knows Rees and his sense of humor also knows that he is a person who takes EVERYTHING VERY SERIOUSLY.”

Rees visits Malaprop's on May 12 for the penultimate stop of his nationwide book tour. “I really like Asheville,” he told Xpress last week in a phone interview. “You guys have an organic-mattress store that really blows my mind. I wish I'd have thought of that.”

Below, excerpts of our chat:

Are you sick of pencils yet?
You know, I was asking myself that question last night. Because while I've been on tour, I've had over 50 orders come in, and I'm feeling a little overwhelmed. I'm averaging about four pencils an hour, so I have a lot of work ahead of me.

After all this sharpening, are you cranking them out at a faster pace?
No, you can only do it so fast. The only way I could improve my speed would be to use an electric pencil sharpener, and of course that's not going to happen.

What can folks expect if they attend your reading here? Are you strictly reading, or sharpening as well?
I'll sharpen pencils live and demonstrate some sharpening techniques using audience volunteers. I do a Q&A at the end of the reading, where I'll answer any question about pencils. And then I'll offer samples at a reduced rate of $10 per pencil.

You've mentioned before that your pencil-sharpening service — the very idea of it and the fact that you've taken it so far — elicits pretty severe anger from some critics, especially in online discussions of your work. I can feel that already: I can tell that some readers are going to be angry at me for writing about you.
Stay strong, brother.

Thank you. Have you seen any manifestations of that anger in person on your book tour?
No, everyone who's come out on the tour has been really cool and supportive. No one's come up and slapped me or thrown an electric pencil sharpener at me.

I can't imagine anyone taking pencil sharpening further than you have already. Do you anticipate doing more of this in your future?
I don't know. My attitude has always just been to see how far I can take it. But it's been so much more successful than I ever imagined, so I don't know that there's any more mountains I have to climb with pencil sharpening, you know?

— Asheville-based writer Jon Elliston can be contacted at jonelliston@gmail.com.

who: David Rees
what: Reading and book-signing event for How to Sharpen Pencils
where: Malaprop’s Bookstore and Cafe
when: Saturday, May 12 (7 p.m. malaprops.com)