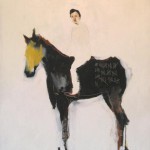 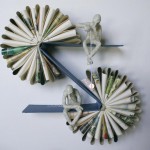 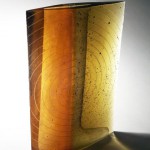 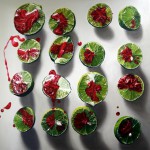 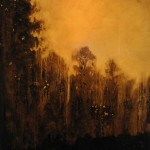 Grant Penny’s “Vanished in the Blue and Green,” at Gallery Minerva.

Arts writer Ursula Gullow met up with local mixed-media artist Bridget Conn to discuss some of the art you might see at the downtown Asheville galleries this month. The following are excerpts from their conversation.

Conn: When I look at this [ “Ascension” ] I think about how I’m always trying to push on my students that contrast is what catches people’s eye, and what I love about this is that you have a lot of contrast. There’s the contrast in light and dark, and the control of paint versus the drips. What’s showing and what is not showing is so specific; and I’m totally a sucker for the hatch marks. I’ve done that so many times [in my own work].
Gullow: What do the hatch marks mean to you?
Conn: Well, I can say that, for me specifically, I like the idea of this primitive mark-making as a way of trying to be scientific and organized about something. It’s a way of trying to quantify something but it’s sad and failing. Within this painting, I might have to contemplate on it a little more about what it could mean, but when I see something used like that, that I’ve had identification with, it’s hard not to be drawn into that feeling.

Gullow: His work [”Penny for your Thought”] is grabbing me the most from everything in here, but I’m not so into the figures [he’s incorporated.]
Conn: Exactly. I’m really into paper sculptures, and I like the idea of a book taking on more of an object sort-of thing — especially nowadays with the whole Kindle thing — so this is really celebrating the object of the book. But yeah, I don’t feel like it needs the figures. I want to look at it as more of a non-objective sort of piece.
Gullow: It’s funny because he took a book of another artist’s paintings, and he cut it in half and did this really interesting thing. That’s enough for me. Then bringing the figures in turns it into more of a narrative.
Conn: It makes it so much more of a literal experience but I want to appreciate it for the non-objective qualities than the story.

Gullow: I don’t think of Asheville as a place to look at really high-end glass art, so I appreciate that this gallery is here. It’s unexpected. What are your feelings on glass art?
Conn: I know what’s involved in glass, so I have a hard time getting over just how hard it is to learn the medium. I feel like a lot of glass artists will get to a place where they have to show off that skill because it’s such a hard skill to master, and that is appreciable. But when you have a piece like this [“Chemistry”], it looks less technically difficult than some of this other stuff, so I feel like it’s not trying to show off: “Hey, I’m glass, and look at how awesome I can make things out of glass.” It’s subtler. There’s simplicity to it that I’m attracted to.
Gullow: It’s subtle, but actually the design is quite complicated the more I look at it — this opening in it, the neutral colors and the different layers.
Conn: And I keep seeing a hint of a figure — like a neck and shoulder. That’s pretty interesting.

Gullow: I really did think this [”Polished Key Limes”] was a photograph from back there. This is not something I’d necessarily want on my wall, but it’s actually hilarious to me.
Conn: Yeah, that caught my eye.
Gullow: The study of reds and greens is great, and I like how gruesome it is. It’s funny how she’s making the food look kind of disgusting. I wonder if they sell her work very much … Let’s go downstairs.
Conn: Hmm, I didn’t know they had a downstairs!
[Later]
Gullow: You know, I kind of like these [”Aaron and Heather,” two freestanding life-size figurative drawings on plywood.]
Conn: They’re by the same artist who did the limes upstairs.
Gullow: Really! I’d love to see a show of just her work. These look like they were a part of something cool. I like these drawings — the people are interesting to me — but I can imagine they were probably a part of a larger installation. I feel like being in here with all this other stuff is diluting them.
Conn: Yeah, they don’t need someone else’s work hanging in the middle of them.

Conn: These sort of have a photographic quality to them and I’m not sure why.
Gullow: The sepia tones maybe?
Conn: Yeah, but it’s obviously a painting. I get stopped a little on the really glossy surface.
Gullow: Do you think it works well with this? I’ve never been a fan of most high gloss surfaces. I’d like to see his work with more of a matte surface.
Conn: Here, with the shiny gloss, you can see your reflection in it. The work feels like something I’d want to get sucked into [because of it’s large size] but I keep seeing myself in it and it keeps me, ironically, out of it.
[Editor’s note: There are several works by Clayton Santiago exhibited at Haen that have a matte finish]

Conn: There’s something about the imagery of this [”Vanished in the Blue”] that’s almost funny. Bringing that line into it — there’s a reason it’s that long. Like, follow that line and, “Oh cool, there’s the paper airplane (laughs).”
Gullow: I like the collaging with paper too.
Conn: Exactly. If this wasn’t paper collage I don’t think I’d like it as much. The fact that this paper got cut out and glued that specifically — that, I really like; and I really like the textures that get involved in using this paper.
Gullow: I like how he glued the paper around the edges.
Conn: Yes, they’re very much objects that way.

— Ursula Gullow writes about art for Mountain Xpress. See her work at http://ursulagullow.com.

who: Asheville Downtown Gallery Association and related galleries
what: Second downtown art walk of the season
when: Friday, June 1